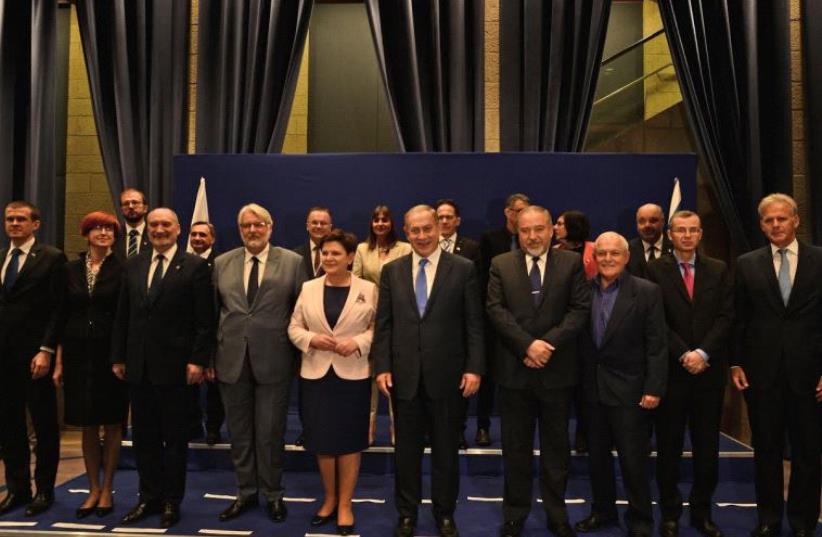 Polish Government and Israeli Government meet
(photo credit: GPO)
Israel is opposed to the use of the term “Polish death camps” to describe the Nazi concentration camps set up in occupied Poland during World War II such as Auschwitz-Birkenau, Treblinka and Sobibor, Jerusalem made clear in a joint statement issued with the Polish government following high level talks on Tuesday.The issue is very sensitive to the current Polish government, which initiated legislation over the summer that would penalize anyone using the term with up to three years in prison. The Poles maintain that calling the concentration camps on their soil “Polish death camps,” rather than terms such as “Nazi death camps set up in occupied Poland,” whitewashes German responsibility, and places it on their shoulders.Following meetings in Jerusalem between Prime Minister Benjamin Netanyahu, and a number of his ministers and senior government officials, with visiting Polish Prime Minister Beata Szydlo, and 10 of her cabinet ministers and deputy ministers, a joint statement was released that dealt with a number of different issues, including foreign affairs, defense and innovation.In the section on Holocaust remembrance, the statement read: “The governments attribute great importance to their dedicated efforts in the field of education, particularly in eradicating false stereotypes in both countries. Both governments firmly oppose any form of discrimination on racial grounds and antisemitism, as well as any attempts at distorting the history of the Jewish or Polish peoples by denying or diminishing the victimhood of the Jews during the Holocaust, or using the erroneous terms of memory such as ‘Polish death camps.’” Netanyahu, at the start of the government-to-government meeting, the third of its kind aimed at deepening relations between the two countries across a wide range of different spheres, referenced the death of millions of Jews in Poland during the Holocaust.“We’ve had a joint history, the Jewish people and the Polish people, for 1,000 years. It’s had its ups and downs, in the previous century the worst down in the history of humanity with the murder of three million Polish Jews by the Nazis in a horrible tragedy.” Netanyahu said. “Poland too underwent terrible suffering during that war, and the history of modern Israel and modern Poland in the last 70 years is a history of tremendous hope and tremendous vitality. The rise of these two modern democracies, with free economies, with robust people, I think is a story of hope and inspiration for all of the world.”Netanyahu praised Poland as being “one of the important countries in Europe,” and said it is “developing in many ways more rapidly than most of the countries of Europe.”Netanyahu also praised Poland for taking a “resolute stand against the resurgent antisemitism” in parts of Europe, as well as taking an “important position in international forums against the automatic reflex of anti-Zionism and anti-Israel resolutions. That is important, too.”Netanyahu has made changing voting patterns at international forums against Israel one of his main foreign policy goals.Poland generally abstains on key resolutions having to deal with Israel at the UN.