Former Florida governor says he thinks US should make the move to show solidarity with Israel. 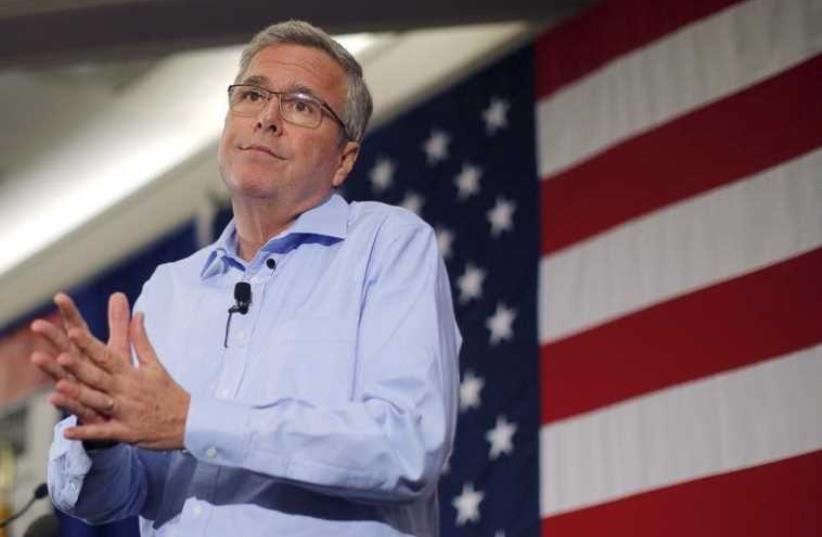 Former Florida governor and probable 2016 Republican presidential candidate Jeb Bush speaks at the First in the Nation Republican Leadership Conference in Nashua, New Hampshire
(photo credit: REUTERS)
Advertisement
WASHINGTON – Jeb Bush, a likely candidate for the Republican nomination for president in 2016, expressed support on Saturday for Jerusalem remaining undivided as Israel’s capital and for moving Washington’s embassy to the historic city from Tel Aviv.Asked in Nashville whether Jerusalem should remain Israel’s capital “forever” – as is the policy of the Netanyahu government – Bush said, “I support that, absolutely.”They were his first comments on the issue since he began exploring a run for the presidency. Bush plans to formally announce whether he will run by the end of June.“I also support moving the embassy to Jerusalem as well – our embassy, not just as a symbol but a show of solidarity,” he continued, speaking at the Tennessee GOP’s Statesmen’s Dinner.Bush’s position is unoriginal on the campaign trail, but has never been adopted in office. Neither his brother, George W.
Bush, nor his father, George H. W. Bush, agreed to move the US Embassy to Jerusalem during their tenures as president, despite Congress passing legislation mandating such a move.Presidents have periodically waived moving the embassy for “reasons of national security.”Should Bush choose to run for the Oval Office, he will join a field nearly unprecedented in size, with more than 16 candidates vying for the Republican nomination.