If Hazan has managed to get an international name for himself, it’s probably because of that time he took a selfie with the president of the United States. 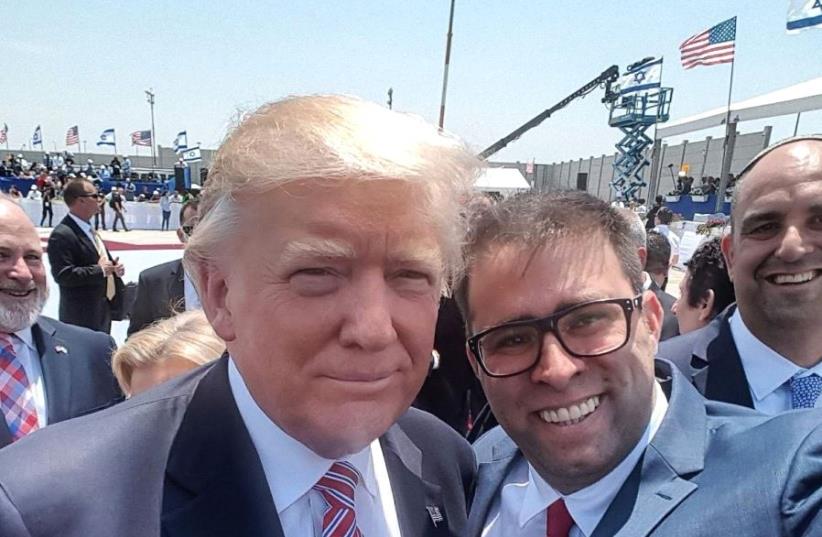 MK Oren Hazan (Likud) snaps a selfie with visiting President Donald Trump upon his arrival in Israel, May 22, 2017
(photo credit: TWITTER)
Advertisement
Likud MK Oren Hazan spent Wednesday morning preparing for an encounter that didn’t happen with a Jordanian lawmaker who challenged him to a fight – and yet that is not the most outrageous thing the scandal-plagued legislator has done since he was elected to the Knesset in 2015.We rounded up some of the highlights – or are they lowlights? – of Hazan’s public life.10) Speed Racer: In December 2016, Hazan got caught driving at 150 kph – about twice the speed limit – and had to pay a fine and had his license revoked for 30 days. And if that wasn’t bad enough, the District Attorney’s Office appealed the ruling in June 2017, saying it was too lenient. It turns out Hazan has quite the record, with five speeding tickets, one for using his cellphone while driving, four for driving without a seatbelt, one for not letting pedestrians cross the street, two for not showing his license and registration, one for driving off the road, two for double-parking, and two for parking in a no-parking zone.9) An offer you can’t refuse: Hazan started his political career with a bang. He produced a Godfather-themed ad for the 2015 Likud primary in which he appeared with his father, former MK Yehiel Hazan who was kicked out for double-voting in the plenum and then trying to hide the computer that revealed his deed. The ad featured the Godfather theme music, and Hazan-the-dad speaking in a Brando-esque voice telling his son to avenge the family name. 8) A shadow over the Likud: Yoav “Hatzel” (“The Shadow”) Eliasi is more known for his extremist rabble-rousing than his rapping career these days, and is associated with radical right-wing groups and figures, like Hebron activist Baruch Marzel, soccer hooligans La Familia, and anti-miscegenation group Lehava, using social media to spread his views, which have been criticized by many as racist incitement. Somehow, Hazan decided that makes Eliasi a perfect Likud member, signing him up for party membership in 2016 and saying the move would attract “the core of the Right.”7) The Candyman: When Palestinian terrorists went on hunger strike in prison earlier this year, they got international attention. What received less notice outside of Israel was a video of the hunger strike’s leader, arch-terrorist Marwan Barghouti, eating cookies and chocolate in his cell. When Joint List chairman Ayman Odeh gave an impassioned speech in the Knesset defending the hunger strikers, Hazan approached the stage with a Tortit, the type of chocolate bar Barghouti was caught on camera noshing. Hazan was promptly escorted out of the plenum. The Tortit incident is part of a pattern of what could be called Arab-baiting on Hazan’s part. He constantly heckles Joint List MKs when they speak, and his favorite catchphrase seems to be, “The Land of Israel is for the people of Israel and not Ishmael.”
6) Vive Le Pen: In an awkward moment for Israel’s relations with French Jewry, Hazan endorsed Marine Le Pen for president. Only a very small percentage of France’s Jews supported the far-right candidate, due to concerns that she, like her Holocaust-denier father, held antisemitic views in addition to her openly anti-Muslim ones. Even after Le Pen denied France’s role in rounding up Jews to be sent to Nazi death camps, Hazan tweeted: “I support Madame Le Pen... to build the future of France.” The Likud MK told The Jerusalem Post that he thought Le Pen would do the best job fighting radical Islamic terrorism. Other Likud insiders said that his views did not reflect those of the party – a statement Likud officials have had to make more than once over the course of Hazan’s Knesset career.5) Rumble in the jungle – or not: Hazan headed for the Allenby Bridge crossing into Jordan on Wednesday morning, to face off with a Jordanian lawmaker who said he was going to beat Hazan up for making comments against Jordan. As strange and potentially damaging as this item is, it’s low on the list because in the end Hazan did the responsible thing – at Prime Minister Benjamin Netanyahu’s request, he turned around when he was only 3 kilometers from the bridge. Hazan claimed that he planned to shake the MP’s hand and only talk to him, but the Jordanian said he really did plan to beat Hazan up.4) The selfie seen around the world: If Hazan has managed to get an international name for himself, it’s probably because of that time he took a selfie with the president of the United States. Hazan has been a longtime Donald Trump fan, predicting his win before he was even nominated Republican candidate for president. So, despite not being invited, Hazan snuck into the reception for Trump on the tarmac at Ben-Gurion Airport, pushed through the line of ministers, and snapped a selfie with Trump, introducing himself as “the Israeli Trump.” Making the moment even more awkward was Netanyahu’s obvious disdain for Hazan, as he tried to push the Likud MK’s phone away.

Thank you, Mr. President- it was my pleasure! @realDonaldTrump pic.twitter.com/0TMFzluPN3

3) Bullying the disabled: As number nine might indicate, Hazan is pretty sensitive about his father’s short-lived parliamentary career. He probably found the worst way to express it in November 2015. MK Karin Elharar (Yesh Atid) has muscular dystrophy, and while she is usually capable of pushing the buttons necessary in order to vote, she was having trouble and asked Meretz MK Esawi Frej, who was sitting next to her, for assistance. Hazan began shouting at Frej that he double-voted, Elharar burst into tears, and many lawmakers, including Netanyahu, approached her and comforted her. Netanyahu later rebuked Hazan. But that wasn’t enough for Hazan – days later, during another vote, Hazan shouted to Elharar: “Do you need Esawi to help you?” The Knesset Ethics Committee suspended Hazan for a month in response to his behavior.This was far from the only altercation between Hazan and other MKs – a shouting match between him and Zionist Union MK Ayelet Nahmias-Verbin in the Knesset parking lot comes to mind, as do myriad comments about female lawmakers’ appearances – but going after a disabled colleague for her disability is probably the worst.2) Assault charges: This is the point where Hazan’s antics cross into possible criminal territory. Hazan is expected to go on trial for assaulting and insulting a public servant and inappropriate behavior in public. He was accused of attacking Avi Ezer, the director-general of the Ariel Municipality, during an argument in 2014. The dispute was rooted in a lien on Hazan’s mother’s assets, stemming from an unpaid debt to city hall. The police investigation into the incident took place before Hazan was elected to the Knesset, and the attorney-general had to approve the continuation of the probe.1) Big Pimpin’: Hazan is probably best-known in Israel for the findings of a Channel 2 report that came out shortly after the 20th Knesset was sworn-in, that he managed a casino in Burgas, Bulgaria, pimping prostitutes and providing crystal meth to Israeli tourists, and that he used crystal meth himself. Memorably, a stripper from a club across the street from the casino called him “Big Boss Oren.”Hazan sued Channel 2 for libel; the court found last year that the reports related to prostitutes and drug use were defensible, but not that of dealing drugs. Any kind of criminal probe into his activities would have to be ordered by Bulgaria, which hasn’t made that move – though it asked that Hazan not be in the Israel-Bulgaria Parliamentary Friendship Group. And the Ethics Committee couldn’t do anything about it, because he allegedly took the actions before becoming an MK. The one thing the Knesset Ethics Committee did say about this matter, however, is that it is unbecoming of lawmakers to call Hazan a pimp. Knesset Speaker Yuli Edelstein did all that was in his power against Hazan immediately after the report; Hazan had been appointed a deputy Knesset speaker, and while Edelstein could not strip Hazan of the title, he did not give him any shifts conducting plenum meetings. In response, Hazan threatened Edelstein that he would reveal secrets about the speaker. Two years later, he has yet to do so.Despite this list, Hazan is probably in the Knesset to stay, at least until the next election. As much as Netanyahu would apparently like to be rid of Hazan, there’s nothing he can do. While he’s been repeatedly punished by the Knesset Ethics Committee, Hazan can remain an MK until he feels like resigning, is voted out, or is convicted of a crime with moral turpitude.