Mashav alumnus returns to Israel as president of Honduras 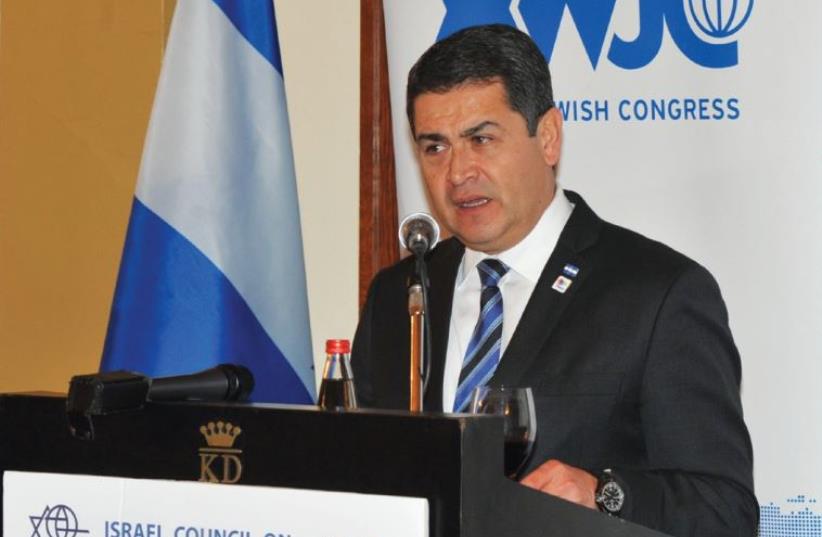 HONDURAS PRESIDENT Juan Orlando Hernández
(photo credit: ANDRES LACKO)
Advertisement
Mashav, Israel’s Agency for International Development Cooperation, has alumni who have risen to high positions in their home countries, but according to President Reuven Rivlin, none has returned to Israel until now as the head of his or her country.The exception is Honduras President Juan Orlando Hernández, who, accompanied by several of his country’s ministers, called on Rivlin at the latter’s official residence on Thursday.Hernandez won a scholarship in the early 1990s to attend a Mashav young leadership program, which has obviously paid off.In the course of his visit with Rivlin, a development cooperation agreement on agriculture; water management and conservation; training; and capacity building was signed by Arturo Corrales Alvarez, the Honduras secretary of foreign affairs and international cooperation, and ambassador Gil Haskel, deputy director-general at the Foreign Ministry and head of Mashav.Another cooperation agreement was reached between Hernandez and Rivlin on the basis of trust, without any documentation or signatures. Each agreed to speak out on behalf of the other’s country in all international forums, and particularly when speaking to members of the US Congress.Hernandez said that he hoped that other young people from his country would be able to benefit from the Mashav leadership course, just as he did.He also spoke of the 15 years of violence that his country has been subjected to by drug traffickers, resulting in the deaths of more than 30,000 people.Rivlin’s response was that terrorism is terrorism – whether it be the outcome of fundamentalism or drug trafficking.Rivlin noted that the defense establishments of both countries are in close and constant contact.Hernandez said that in addition to learning more about security from Israel, Honduras is interested in benefiting from Israeli expertise in water management and conservation, so as to be able to produce more crops both for domestic use and export.Relating to the conflict between Israel and the Palestinians, Rivlin spoke of how much could be achieved if only the Palestinians would realize that Israel is here to stay. He was hopeful both sides will learn to trust the other, so that they can live alongside each other.“We hope to reach the day when we can believe that the Palestinians genuinely want peace,” he said, adding that the Oslo Accords and the evacuation of the Gaza Strip had failed to foster peace.