Within the next three months, Netanyahu will travel to Australia, Singapore and Kazakhstan along with Azerbaijan, where he briefly visited during former premiership in 1997. 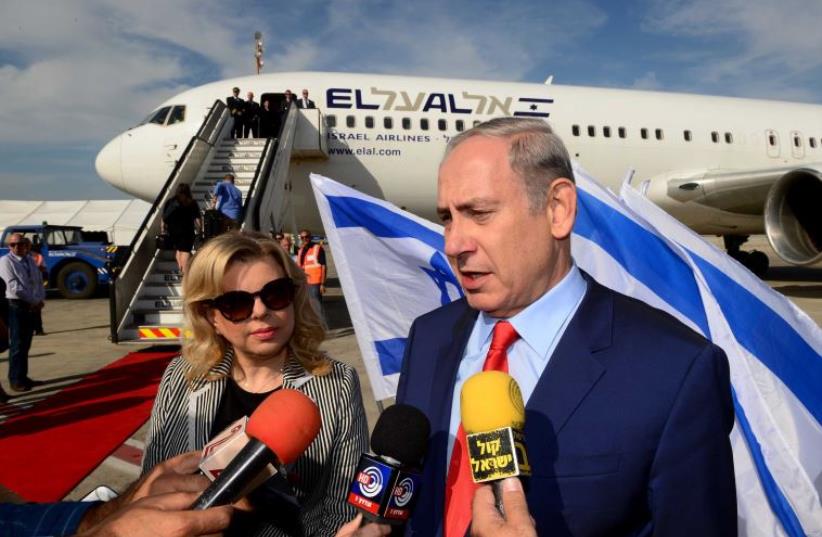 Benjamin and Sara Netanyahu board a plane ahead of the UN General Assembly in New York
(photo credit: AVI OHAYON - GPO)
Advertisement
Prime Minister Benjamin Netanyahu announced at Sunday's cabinet meeting that within the next three months he will travel to four countries, including three where no sitting Israeli prime minister has ever visited: Australia, Singapore and Kazakhstan.The fourth country is Azerbaijan, a strategic country on Iran's border. Like Kazakhstan, Azerbaijan is a majority Muslim country. He visited there briefly in 1997 on the way back from a visit to the East, and met in the airport in Baku with late Azerbaijani President Heydar Aliyev, the father of the current president.Israel purchases most of its oil from Azerbaijan and Kazakhstan. Starting in January, Kazakhstan will have a seat on the 15-member UN Security Council.Netanyahu's visit to Singapore will be a reciprocal visit to one that country's Prime Minister Lee Hsien Loong made to Israel in April, and the trip by an Israeli prime minister to Australia has been discussed for months, in order to demonstrate to Canberra that it's strong, consistent support for Israel is not taken for granted.Netanyahu did not give the exact dates of his trip. He is also expected to travel to Togo in the Spring for a summit there with the leaders of a number of wast African countries.Netanyahu said that in addition to his travels, President Reuven Rivlin will go to India in two weeks. India's president Pranab Mukherjee visited Israel in October.In addition, later this month a government-to-government meeting will be held in Jerusalem with the Polish government.All of this, Netanyahu said, attests to the degree to which Israel's international relations are flourishing, despite losing two votes in UNESCO on Jerusalem this month.“Israel's international relations are spreading in Asia, Africa, Latin America, and many other places,” Netanyahu said. “We realize that this development flows from Israel's technological and economic strength on one hand, and its security and intelligence capabilities on the other.”Netanyahu added that this does not mean that “we are not challenged in international forums, like we saw in the scandalous UNESCO decision,” but that “there is no doubt” that in international organizations and even in votes like those at UNESCO, there has been a change.Netanyahu thanked Tanzania's president John Magufuli And the Croatian representative at UNESCO for preventing a vote there erasing any Jewish connection connection to the Temple Mount from passing by a consensus, thus depriving the resolution -- which passed by a vote of 10 to 2, with eight abstentions -- of any practical significance.“This is another indication of the great changes in Israel’s position in the world in direct relation to Israel's strength,” he said.