Peres bombshell: I stopped an Israeli strike on Iran

"Prime Minister Benjamin Netanyahu and defense minister Ehud Barak were pushing ahead with their plans to attack Iran." 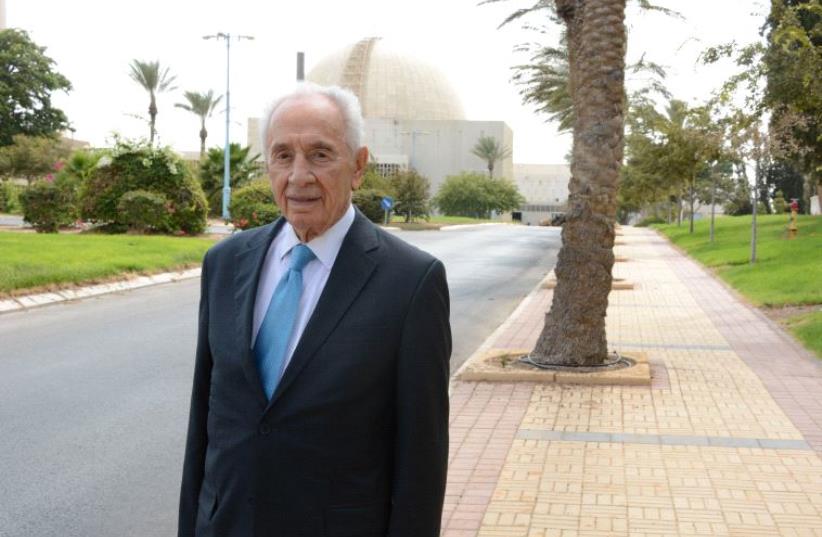 Peres outside the Nuclear Research Facility
(photo credit: COUNCIL FOR ATOMIC ENERGY)
Advertisement
If not for Shimon Peres’s intervention, Prime Minister Benjamin Netanyahu was planning to bomb Iran, the former president revealed confidentially to The Jerusalem Post over two years ago.In a meeting at the Peres Center for Peace in Jaffa on August 24, 2014, Peres dropped the bombshell in a conversation with me and Jerusalem Post Managing Editor David Brinn.I have thought long and hard about whether to publish it, and reached the conclusion that he wouldn’t have told us if he didn’t want us to.I was editor-in-chief of The Jerusalem Post at the time and had established a close relationship with Peres, who had retired a month earlier as president.During the course of the conversation (in which just the three of us sat and chatted over coffee), Brinn asked Peres what he considered the greatest achievement of his presidency. He responded by saying that he had personally intervened to stop Netanyahu from ordering a preemptive strike on Iran’s nuclear sites.The following is based on my notes:Peres: I stopped Netanyahu from attacking Iran.Me: Can you tell us more? Peres: I don’t want to go into details, but I can tell you that he was ready to launch an attack and I stopped him. I told him the consequences would be catastrophic.“Can we report this?” I asked.“When I’m dead,” Peres replied, with a wry smile.Almost a year later, on June 7, 2015, I moderated a security panel at The Jerusalem Post Fourth Annual Conference in New York in which Senior Contributing Editor Caroline B. Glick got into a heated argument with former IDF chief Lt.-Gen. (res.) Gabi Ashkenazi and the late Mossad director Meir Dagan, charging that they had refused an order from Netanyahu to prepare for an attack against Iran.In 2010, Glick said, citing a report from the investigative journalism TV program Uvda, “we learned that two of the gentlemen on this panel were given an order to prepare the military for an imminent strike against Iran’s military installations and they refused.”While pointedly not denying that the order had been given, Dagan insisted: “It was an illegal order. We were always willing to obey any legal order by the prime minister. We never refused an order.”“You were ordered by the security cabinet,” Glick retorted.“You were not there. You don’t know what happened there,” said an indignant Dagan.“There was never a decision about it,” Ashkenazi added, although he acknowledged that he had opposed a unilateral Israeli strike on Iran.At the Herzliya Conference the following day, Maariv columnist Ben Caspit raised the issue with Peres.“That journalist [Glick] wasn’t there! How would she know?” Peres raged. “These are issues that should be discussed in the cabinet, not in the media and not in public.”“Peres had good reason to be angry,” Caspit later wrote on the Al-Monitor media site. “He was one of the key players in that drama, which played out between the summer of 2009 and the summer of 2011. These were some of the tensest times for Israel’s defense establishment. Prime Minister Benjamin Netanyahu and defense minister Ehud Barak were pushing ahead with their plans to attack Iran, while the IDF, headed by Ashkenazi, and the heads of the other defense establishments opposed the move. Ashkenazi and Dagan had the support of none other than the president at the time, Peres, who joined their efforts to thwart the attack.”Was it in fact Peres, the architect of Israel’s nuclear program, who ultimately foiled an Israeli attack on Iran’s nuclear sites? He thought so, although he didn’t say how he did it.