President Rivlin admits: I was at the rally which called for Rabin's murder

The president clarified that he had not been on the balcony with now-Prime Minister Benjamin Netanyahu. 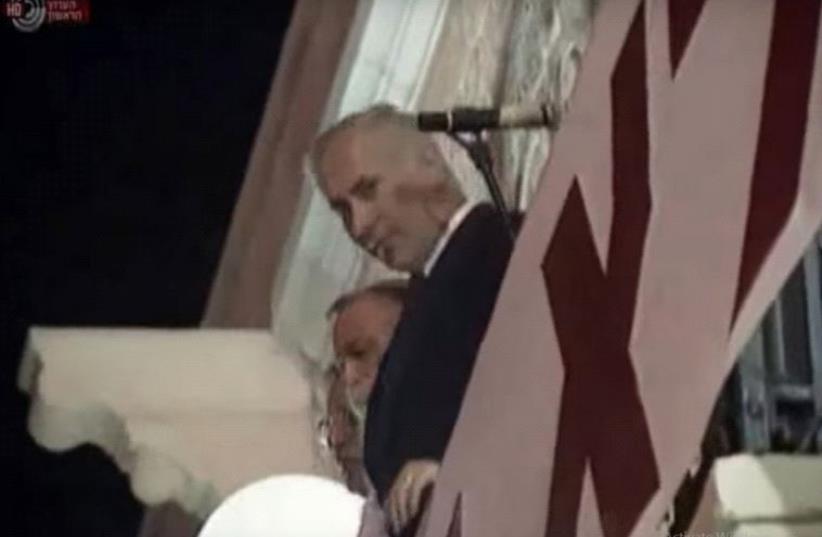 Benjamin Netanyahu at the anti-Rabin rally in October 1995.
(photo credit: YOUTUBE SCREENSHOT)
Advertisement
In a courageous confession, President Reuven Rivlin, a committed right-wing ideologist and a former Likud MK before his election to the presidency, admitted on Thursday night that he had been among the demonstrators at the vicious anti- Yitzhak Rabin rally in Jerusalem’s Zion Square a few weeks prior to prime minister Rabin’s assassination in 1995.He had not been on the balcony, he clarified, but as someone opposed to the Oslo Accords, he felt that it was his democratic right to make his voice heard. But what he witnessed there shocked him and angered him, because he said the voices he heard were not the legitimate voices of opposition.Though fearful of what those voices represented, Rivlin never imagined that the incitement would lead to Rabin’s murder. “The prime minister was murdered on our watch,” declared Rivlin.
Dalia Rabin and Reuven Rivlin, November 4, 2014. (Photo credit: Mark Neiman/GPO)He was speaking at the annual candle-lighting ceremony for Rabin that is traditionally held at the President’s Residence on the Hebrew anniversary of Rabin’s death. This year, Rivlin was aided by Rabin’s great-grandchildren Adam, Elinor, Omer and Alona.Yuval Rabin, the slain prime minister’s son, said that 21 years after his father’s death there are still conspiracy theories, there are people who continue to incite against his father and blame him for the attack on the Irgun arms ship Altalena in June 1948 and for outbreaks of terrorism.There are even those who justify his murder.A new way has to be found to commemorate his father’s death and what he stood for, said Rabin, because every year the ongoing arguments create greater rifts among the population.“Have we done everything we can do to prevent the next assassination?” he queried, and proposed that people find a better way to eliminate their differences. “Let’s tear down the walls – both the metaphoric walls and the real walls between us and around us,” he said.
Advertisement
Subscribe for our daily newsletter