Rivlin: India and Israel can ‘make magic’ on food security 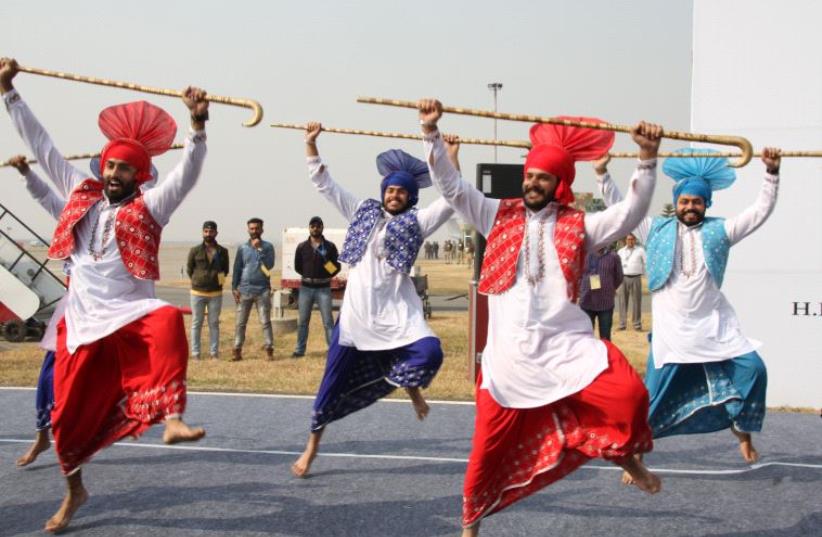 Dancers welcome Rivlin to Chandigarh, India
(photo credit: TOVAH LAZAROFF)
CHANDIGARH, India – Food security is an arena where India and Israel can “make magic” happen, President Reuven Rivlin said on Sunday as he helped open India’s premier agricultural fair.“In the Middle East and in Israel we have always been concerned about security and homeland security,” Rivlin told Indian farmers and business people at the fair. “What India taught us is that the greater challenge in today’s world is food security, and this why we are here today.”Chandigarh – part of India’s bread-basket region in the country’s north – rolled out the red carpet for Rivlin, the guest speaker at the Confederation of Indian Industries Premier Biennial Agro Technology and Business Fair.


Thirteen countries, including the United States, China, Canada, Germany and Great Britain, participated in the event.Rivlin visited the fair as part of an eight-day trip with a business delegation to mark 25 years of diplomatic relations between the two countries.Rivlin, who flies back to Israel Monday night, is only the second Israeli president to visit India after Ezer Weizman did so in 1997. The only prime minister to visit was Ariel Sharon in 2003.Rivlin was greeted at the Chandigarh airport on Sunday by dancers and musicians in colorful costumes as the Israeli flag waved, and signs welcoming him and India’s President Pranab Mukherjee dotted the road his motorcade traveled.“Building a nation means to produce food for all, now and for the next generations to come. Food security is not only about surviving, it’s about freedom,” said Rivlin.When it comes to food, Israel and India can make “magic” together, whether it is the development of a new kind of cherry tomato or the use of solar panels on trucks to keep food cold and fresh, he said.“Together, we can do more to make in India and to make with India. We can make a better future for the next generation,” he said. “Yes, [together] we can bring magic to the world. We are proud to be here and to be your partners.”Rivlin drew both laughter and applause from the audience when he said that, while in the country, he has learned a new word in Hindi, “jugaad,” which means a clever solution born out of trouble.To know Israel, he said, is to guess “how quickly I fell in love with this word.”“The State of Israel is jugaad. It’s the way we think. The way we invent and the way we work,” he said, explaining that he was the president of a small nation that had suffered for being different and had come together from around the globe to build a home for itself out of nothing. 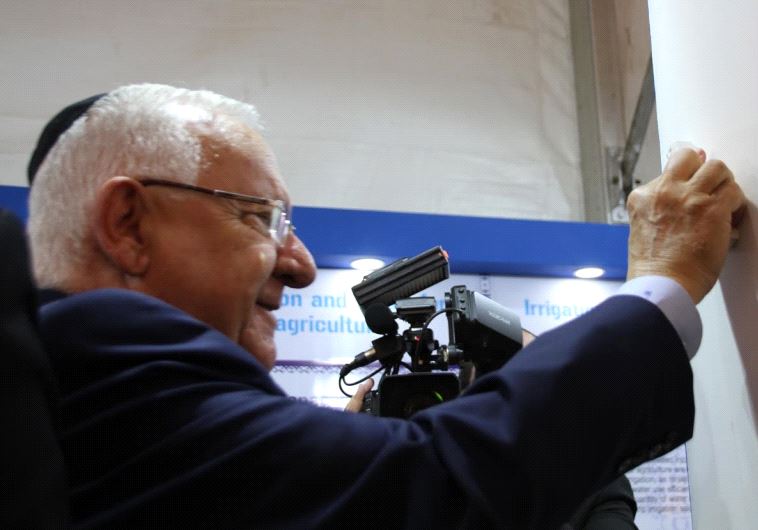 (Israel President Reuven Rivlin places a Mezuzah at the Israeli exhibit booth at India premier agriculture fair. Photo by Tovah Lazaroff.)Mukherjee, meanwhile, spoke about the growth of India’s food production from 50 million tons in 1947 to 270 millions tons in 2016.In addition, he said, the Indian economy is growing at an average rate of 7.6% per year and will soon be a world power.The Indian president also touted the Israeli-Indian partnership in agriculture, including its drip irrigation which, has helped Indian farmers achieve greater productivity per drop of water.Together, the two men then walked through the fair, with Mukherjee helping Rivlin cut the ribbon at an exhibit by the Israeli Embassy highlighting Israeli innovation to increase milk production and breed disease-resistant poultry. 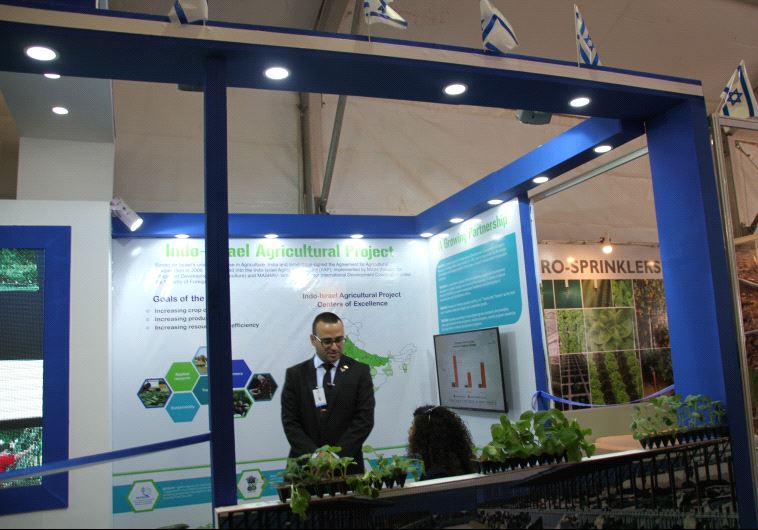 (Israeli agriculture booth at the premier Indian agriculture fair in Chandigarh, India. Photo by Tovah Lazaroff.)Among the Israeli companies exhibiting at the fair was Netafim. Manager Jignesh Karkar said the company’s drip irrigation system had helped revolutionize agriculture in India and around the world.Indian diplomats and businesses were not the only ones paying attention to Rivlin at the fair, however.In an interview with Israel Radio two Turkish businessmen told reporter Shimon Aran they would like to meet Rivlin and have him help cut the ribbon on their exhibit, as well.Aran spoke to the embassy staff at the fair, who immediately arranged a small detour for Rivlin at the end to stop at the Turkish exhibit.Standing next to the two Turkish businessmen, they, together, held up a red ribbon.Israel and Turkey are in the midst of reestablishing full diplomatic ties after a six year freeze over the Mavi Marmara incident.“I am happy to celebrate the opening of this exhibit, as well,” said Rivlin. “They are our good neighbors and I hope they will
Subscribe for our daily newsletter