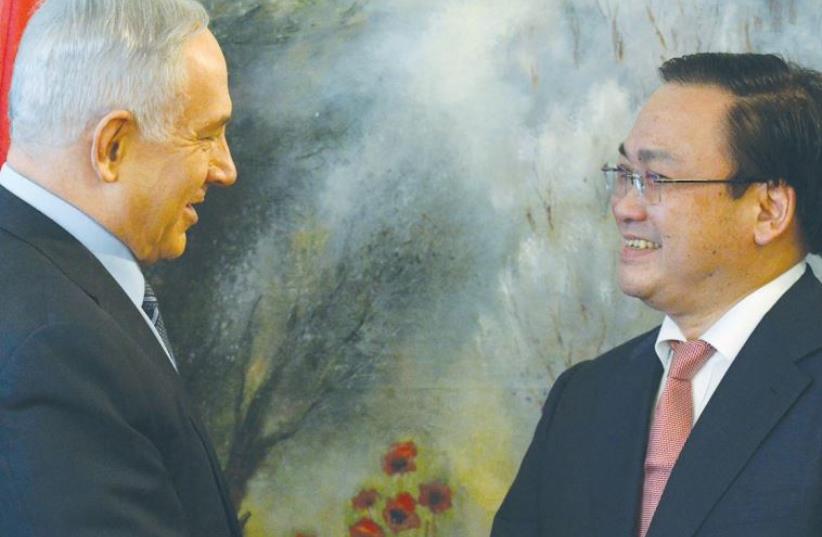 PRIME MINISTER Benjamin Netanyahu greets Vietnamese Deputy Prime Minister Hoang Trung Hai at the Knesset this week.
(photo credit: KOBI GIDEON/GPO)
Advertisement
Israel would like to see the strong, robust relationship it has with Vietnam reflected in a change of that country’s reflexive anti-Israel votes in international forums, Prime Minister Benjamin Netanyahu told visiting Vietnamese Deputy Prime Minister Hoang Trung Hai this week.Netanyahu met Hoang on Wednesday in the Knesset during the Vietnamese official’s three-day visit that concluded on Thursday. The two leaders signed a memorandum of understanding on holding diplomatic and political dialogues.Netanyahu told reporters in Paris on Monday that Israel will begin asking countries who have good ties and close cooperation with Israel to reflect those ties in their votes in international forums. He said this is one of Israel’s “natural expectations” from friendly countries, and something that will be increasingly discussed. According to sources in the Prime Minister’s Office, Netanyahu’s remarks to Hoang were an articulation of this policy.Diplomatic sources said that Hoang listened, but – as deputy prime minister – was not in a position to make any commitments.Hoang’s visit comes amid a significant strengthening of ties between the two countries, with two-way trade having rocketed from $200 million in 2009 to almost $1.1 billion in 2014. The 2015 goal is $2b., and the figures are expected to climb even higher once a free trade agreement, currently being negotiated, is completed.Israel’s current level of trade with Vietnam is more than that of all but seven of the 28 countries in the EU. It is four times the level of trade with Norway, more than twice the amount of trade with Austria, and also exceeds trade with Sweden by $200m., and Ireland by more than $100m.“I welcome you and your delegation,” Netanyahu said before his meeting with Hoang in the Knesset. “I think there are many opportunities between Vietnam and Israel in so many fields, in almost every field. And we look forward to doing this and we believe our countries can seize the future individually, but better together.”Israel’s exports to Vietnam are made up primarily of electronic equipment, machines, tools and fertilizers, and it imports from Vietnam mobile phones, computers, shoes, clothes, seafood, coffee, nuts and machines.Hoang’s visit is the latest in a number of visits by high-ranking officials to and from both countries, with Deputy Foreign Minister Tzipi Hotovely having visited Vietnam in August.Israel opened a defense attaché office in Vietnam earlier this year, a move expected to significantly boost defense between the two countries.Hoang invited Netanyahu to make an official visit to Vietnam, and Netanyahu also invited his Vietnamese counterpart, Nguyen Tan Dung to visit Israel.