Elitzur has been summoned to a hearing before a final deal is made on whether to indict him or not, although it is likely that he will now be charged. 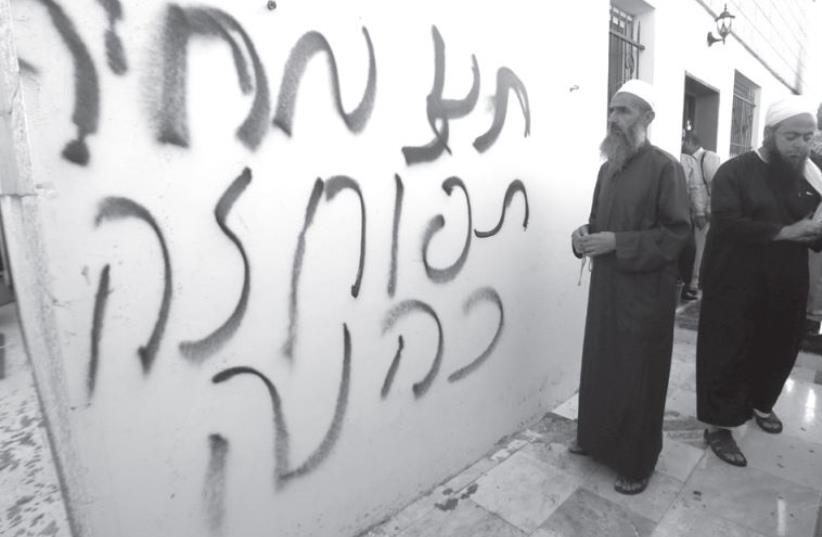 'Price tag' attack
(photo credit: ABED OMAR QUSINI/REUTERS)
Advertisement
Rabbi Yosef Elitzur, a far-right religious leader and author of the controversial book The King’s Torah, will likely be indicted for incitement to violence over opinion articles he wrote in which he seemingly praised so-called price-tag attacks against Palestinians.The King’s Torah, coauthored with Rabbi Yitzhak Shapira, was a book published in 2009 on Jewish laws pertaining to warfare, which argued that, according to Jewish law, killing civilian non-Jews is permissible in certain circumstances, including the killing of non-Jewish infants.The two rabbis were not prosecuted for the book, which then attorney-general Yehuda Weinstein said was written in a general manner and did not call for violence.But in response to a petition by the Israel Reform Action Center, the legal lobbying arm of the Reform Movement in Israel, the State Attorney’s Office announced on Monday that Attorney-General Avichai Mandelblit was considering indicting Elitzur for articles he has written on the Hebrew Internet news site Hakol Hayehudi (the Jewish voice).In May 2013, a day after Evyatar Borovski was killed in a terrorist attack at the Tapuah junction close to the Yitzhar settlement where Elitzur serves as the dean of the Od Yosef Hai Yeshiva, the rabbi wrote an opinion piece that Mandelblit said incited violence against Arabs.“There is a growing phenomenon of actions taken by heated Jews against the enemy...whoever gets close [to the matter] will understand that these [people] are the buds of a growing community that is taking responsibility for the security of Jews,” Elitzur wrote.In another opinion article later that month, the rabbi wrote that price-tag actions were an inevitable outcome of what he described as a too lenient attitude to Palestinian violence, saying that “the Jewish side is forced to revolt.”Elitzur wrote: “They cannot understand that when the violence of non-Jews is treated with extreme leniency and the Jewish public is trampled upon, this will create an ever-growing Jewish public that understands that it is forced to take actions in order to defend itself from the evil that threatens Jews in the Land of Israel... More and more people understand these actions and feel that it is good that there are still people who have hot hearts burning against injustice and evil, against ‘inclusiveness’ and ‘tolerance’ that gives more and more strength and a feeling of victory to the murderous and violent side.”He concluded: “These actions, borne of warmth and mutual responsibility of Jews, is not the goal (even if it is for certain possible to understand them in the current circumstances). At the end of the day, no one wants to live in anarchy, even if there are times when we are forced to live according to the jungle and to show to the evil nations of the world that the Jews can play this game too.”Elitzur has been summoned to a hearing before a final deal is made on whether to indict him or not, although it is likely that he will now be charged.The rabbi told Hakol Hayehudi following the announcement of his impending indictment that he was not bothered by “trifles” when an entire settlement is about to be destroyed because of “Mandelblit’s wickedness,” a reference to the pending demolition of the Amona settlement outpost.“I will continue to say with a clear voice that the Torah of the Jewish people precedes the legal frameworks of non-Jews and forbids doing evil to Jews and adhering to orders and statues that are cruel to merciful Jews,” Elitzur said.