Split on impact of Jerusalem announcement on peace. 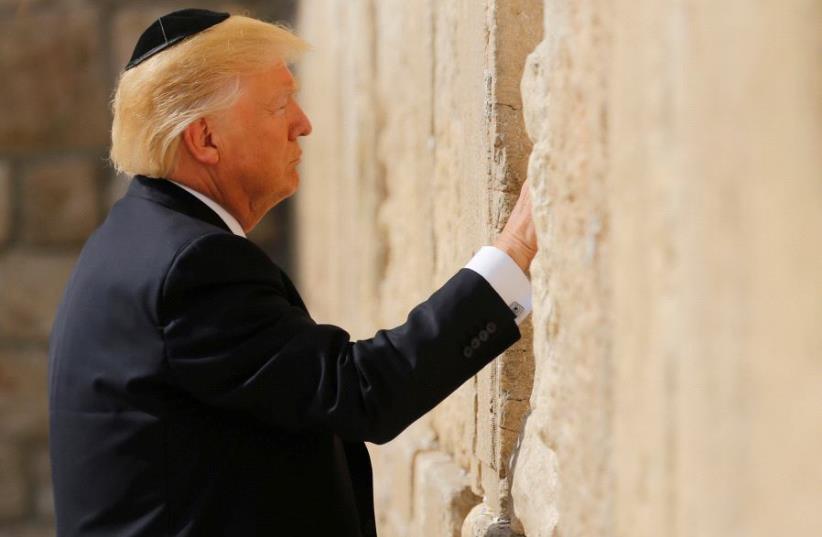 US President Donald Trump places a note in the stones of the Western Wall, Judaism's holiest prayer site, in Jerusalem's Old City May 22, 2017.
(photo credit: REUTERS / JONATHAN ERNST)
Advertisement
At a time when President Donald Trump’s popularity has fallen in his own country, his decision to recognize Jerusalem as Israel’s capital and start the process of moving the US Embassy there from Tel Aviv has significantly increased his support among Israelis, according to a Smith Research poll taken on Wednesday for The Jerusalem Post.When 500 adults representing a statistical sample of the adult Israeli population were asked whether the Trump administration is more pro-Israel, more pro-Palestinian, or neutral, 76% of the respondents said it is more pro-Israel, 2% said more pro-Palestinian, 14% said neutral, and 8% said they had no opinion or did not know. Among Jewish respondents, 77% said the Trump administration is more pro-Israel, 1% said more pro-Palestinian, 15% said neutral, and 7% said they had no opinion or did not know. Among Arab citizens, 69% said the administration is more pro-Israel.By contrast, the Smith Research poll taken closest to this point in the presidency of Trump’s predecessor, Barack Obama, found that only 4% of Jewish Israelis considered his administration more pro-Israel than pro-Palestinian. That poll was taken after Obama, in a speech in Cairo, compared Palestinian suffering to the Holocaust, came to the Middle East without visiting Israel and sparred in the White House with Prime Minister Benjamin Netanyahu over Iran.The poll taken on Wednesday was the fourth conducted by Smith Research about how Israelis view the Trump administration since he was sworn in as president last January. Due to his campaign promises, Jewish Israelis received him warmly, with 79% saying in January that they expected his administration to be more pro-Israel.Polls taken before and after Trump’s May visit to Israel, in which he became the first sitting US president to visit the Western Wall, found that support for him had dropped significantly since his inauguration. But it started rising after the visit, which was seen by Israelis as warm.The proportion of Israeli Jews calling Trump’s administration more pro-Israel rose from 56% on May 17, just before his visit, to 61% on June 6 after he left.All of the polls are of 500 adults representing a statistical sample of the adult Israeli population, with a margin of error of 4.5 percentage points.In the current poll, the proportion of those saying the US administration is more pro-Israel than pro-Palestinian is higher among men than women and higher among the religious than the secular. But there was no significant difference among voters of the Likud, the Zionist Union and Bayit Yehudi.The poll also asked respondents whether Trump’s recognition of Jerusalem as the capital of Israel contributes to resolving the Israeli-Palestinian conflict, harms chances of resolving the conflict or has no impact.While among Israeli Arabs, 76% said Trump’s announcement harms efforts to resolve the conflict, Jews were much more divided.

A third of the Jewish respondents said the announcement damages the chance of reaching a solution, 23% said it contributes to resolving the conflict, 36% said it would have no effect, and 8% had no opinion on the matter.Bayit Yehudi voters were the most likely to say the decision contributes to resolving the conflict, at 47%, compared with 22% of Likud voters, 12% of Yesh Atid voters and 14% of Zionist Union voters.