Blue-and-white takes on Cuba in Tokyo 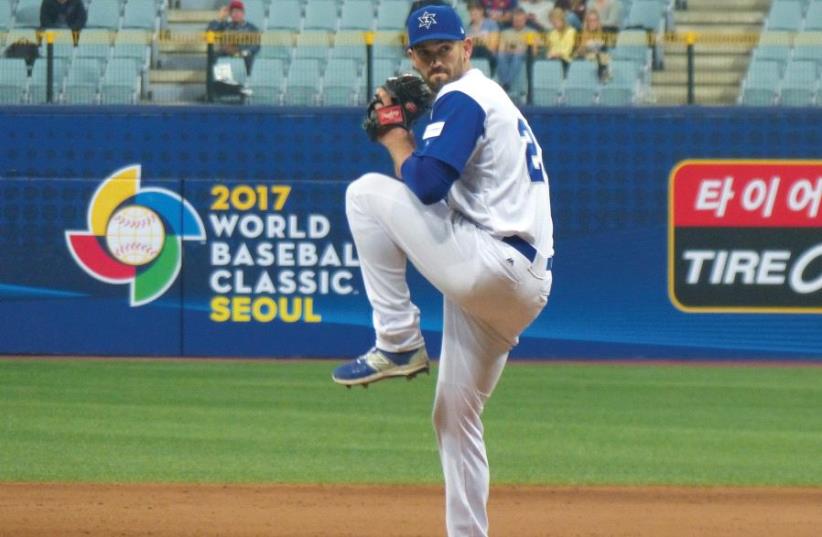 Josh Zeid has been Israel’s most consistent pitcher through the first round of the World Baseball Classic, with a 0.00 ERA in 4.2 innings pitched. The blue-and-white faces Cuba this morning in the opening game of the quarterfinal round in Tokyo
(photo credit: MARGO SUGARMAN)
Israel gets the second round of the World Baseball Classic under way when it faces Cuba in Tokyo on Sunday, a game which could end up proving to be decisive to its hopes of advancing to the semifinals of the competition.After winning Pool A with a perfect 3-0 record to reach the quarterfinals, Israel has got its sights set on reaching the last four at Dodger Stadium in Los Angeles.A win over Cuba on Sunday would likely go a long way towards the blue-and-white achieving that goal.Japan is the firm favorite to finish Pool E in first place, likely leaving Israel, Cuba and the Netherlands to battle for the second ticket to Los Angeles.Israel beat the Netherlands 4-2 in Pool A action on Thursday, albeit in a game neither team had to win after already securing their progress, and will face the Dutch once more on Monday.Two more victories over the next two days will book the blue-and-white’s spot in the semifinals before it even plays Japan on Wednesday.Cuba registered a 2-1 record in Pool B, only losing to Japan. The depth of Cuba’s national team has been hurt by defections, but the squad still includes the likes of Frederich Cepeda and Alfredo Despaigne, whose six home runs each are tied for the most in World Baseball Classic history, and youngsters like Yoelqui Cespedes, Yoenis’s 19-year-old brother.“Team Cuba has always tried to have that same momentum, tried to keep the same emotion as the Cuban national team – to keep playing, and always try to win the game,” Despaigne said. “Our aim is nothing but winning.”Israel’s Ryan Lavarnway was named as Pool A MVP, batting .556 (5-for-9) with four walks while catching all three victories. He homered, drove in three runs and finished pool play with a .692 on base percentage and .889 slugging percentage.Israel, whose squad is built around MLB-affiliated Jewish Americans, will also be counting on the pitching of 15-year MLB veteran starter Jason Marquis and closer Josh Zeid, who bookended the first-round wins over Korea and the Netherlands, respectively.Each team has the option of replacing two pitchers from each round with pitchers from their Designated Pitcher Pool.Israel selected right-hander Brad Goldberg and lefty Jared Lakind from its DPP to replace righties Shlomo Lipetz and Gabe Kremer (injury).Japan faces the Netherlands in Sunday’s second game. Despite missing stars like Shohei Ohtani, Yu Darvish, Masahiro Tanaka and Ichiro Suzuki, Japan cruised into the second round. Leading the way on the mound are aces Tomoyuki Sugano and Ayumu Ishikawa, who allowed only one run apiece in wins over Australia and Cuba, respectively.“We know that we are going to have tough games for the second round,” said manager Hiroki Kokubu. “So I’m expecting all my players to be as hot as they are right now.”The Netherlands has the most Major League star power of any team in Pool E. Its infield includes All-Star Xander Bogaerts, Gold Glover Andrelton Simmons, and 20-home-runhitters Didi Gregorius and Jonathan Schoop.