With the location of the USTA Billie Jean King National Tennis Center in Flushing Meadows, Queens, it is only natural that there are also many Jewish stories at the tournament. 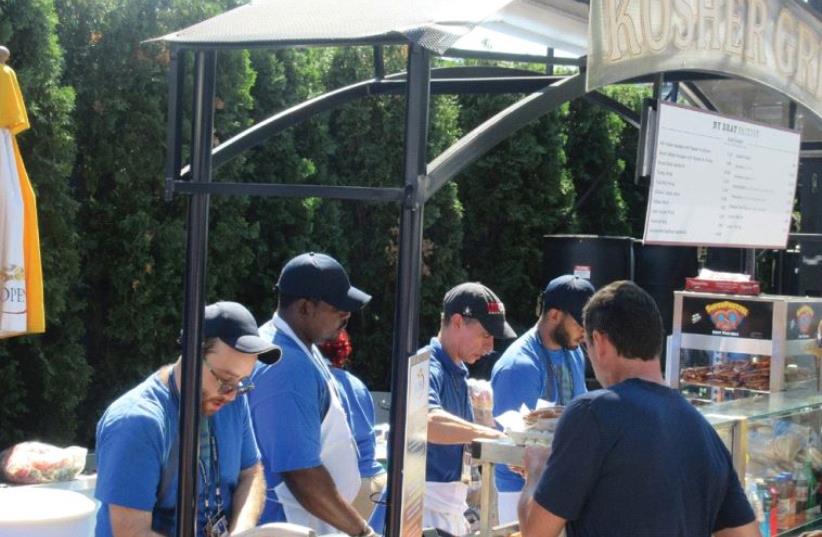 THE GLA TT KOSHER food stand is among the most popular eatery on the grounds of the US Open on all but two days of the tournament – the two Saturdays on which it is closed.
(photo credit: HOWARD BLAS)
Advertisement
The final Grand Slam of 2016 is filled with all kinds of big and small stories – from Serena Williams’s quest for her 23rd title, and Djokovic’s for his 13th, to John Isner’s long, heartfelt embrace of 18-year-old Frances Tiafoe following their tough five setter on opening day. A personal favorite moment was watching Gael Monfils chase down a lob – and crashing into and breaking the on court scoreboard on court 17.With the location of the USTA Billie Jean King National Tennis Center in Flushing Meadows, Queens, it is only natural that there are also many Jewish stories at the tournament, from players to food to minyan requests.Israeli Players Admittedly, there were not many Israelis in the main draw of the US Open singles tournament. One to be exact. And No. 80 in the world, Dudi Sela lost a tough five setter in the first round. But Julia Glushko and Amir Weintraub battled hard through the qualifiers, each winning first-round matches.Sela, who doesn’t play doubles very often, won a doubles tournament earlier this year and is entered in the doubles draw with Frenchman Stephane Robert. And, as expected, beloved Yoni Erlich is playing doubles – this time teaming up with Santiago Gonzalez of Mexico. Yshai Oliel, a top Israeli junior, will enter the qualifying tournament as he battles for a spot in the main draw of the junior event.Jewish Players We have come to expect a large number of Jewish Nobel Prize winners, far out of proportion to our numbers. But what about in the tennis world? There are a surprising number of Jewish players in the draw.Many – like Americans Noah Rubin and Jamie Loeb (who happened to be mixed doubles partners) and Diego Schwartzman – are vocally proud of their Judaism. A few days ago, Rubin tweeted, “Later in the week, a spectacle will take place as the fighting Maccabees @jloeb308 and I play mixed double @usopen.Who’s ready?” Schwartzman lost his first round match to fellow countryman and Rio Olympics sensation, Juan Martin del Potro.There have been unconfirmed reports that a number of other players have Jewish roots, including Camila Giorgi, Elina Svitolina and Timea Bacsinszky. Even it has been reported on several occasions that Rafael Nadal of Mallorca descends from Conversos.Israeli Matches A US Open match featuring an Israeli player can best be described as an El Al flight-like experience.People wander, talk loud, socialize, look for friend, make connections and use Protexia (connections).During the Sela first-round match, I learned that the woman next to me was a party planner in the US and Israel. And by the start of the second set, I knew which Jewish day school her kids attend.Half the fans seemed to sport credentials indicating they are a “player guest” of one of the Israeli players.And people felt comfortable shouting unsolicited advice to Sela, referred to as “Dudi, Melech Yisrael!” (Dudi, King of Israel!).When my seatmate spotted a man covered with an Israeli flag, she commented that her flag had been confiscated last year. And she asked the guard, “if the player was from Italy, would you have taken his flag?!” There is a wonderful sense of camaraderie and I suspect pro-Israel fans outnumbered pro-Uruguay fans (for player Pablo Cuevas) 10-to-1!

Kosher – and Kosher Style, Too What is any sporting event without food – and without extraordinarily long lines? New York Brat Factory (certified Glatt Kosher) serves up wraps (tuna, turkey and chicken Caesar) as well as two types of Italian sausages with peppers and onions, overstuffed pastrami sandwiches, knishes, hot pretzels and of course, hot dogs (and pastrami dogs). The stand is closed on Shabbat, and the lines can be long.This year, SoomSoom, a kosher store in various parts of New York City, has a kosher style booth at the US Open. The booth, outside of Court 17 (and next to Ben and Jerry’s Ice Cream) serves up humus, falafel and more. The sign notes “Kosher Style” and workers explain that some food comes from their kosher stores and others are made on site, and that the stand is open on Shabbat.Ballboys With Yarmulkes At least one ballboy was spotted on the grandstand court of an important first-round match wearing a yarmulkes.And the mother of an Orthodox Jewish day school student reports that her son, also a ballboy at the tournament, wears the Polo Ralph Lauren-issued hat to cover his head.Minyan Requests and More Friends, colleagues and others who know I am covering the tournament turned to me on Twitter and Facebook and more with their Jewish questions. “What are the chances of “chapping” (catching) a minyan at the US Open; I am a mourner and need one?” I directed him to the Sela match and the kosher food line.VERY likely! The New Retractable Dome Spoiler alert, this is not really a Jewish story at the US Open, but long days and nights at Arthur Ashe Stadium, under the bright sun and inevitable rain, got me thinking – if the US Open can find a way to keep players in action and fans dry during the rain, why can’t our rabbis help us find a way to better enjoy the often rainy Sukkot holiday.In much of the US, cold, rainy weather often makes for a somewhat unpleasant sukkot. Get to work, rabbis – and speak with the brains behind the amazing retractable dome.And while you are at it, see if you can find Rosh Hashana and Yom Kippur cantors with voices as great as the ones we heard on opening night at the US Open – Phil Collins and Leslie Odom of Hamilton fame.
Advertisement
Subscribe for our daily newsletter