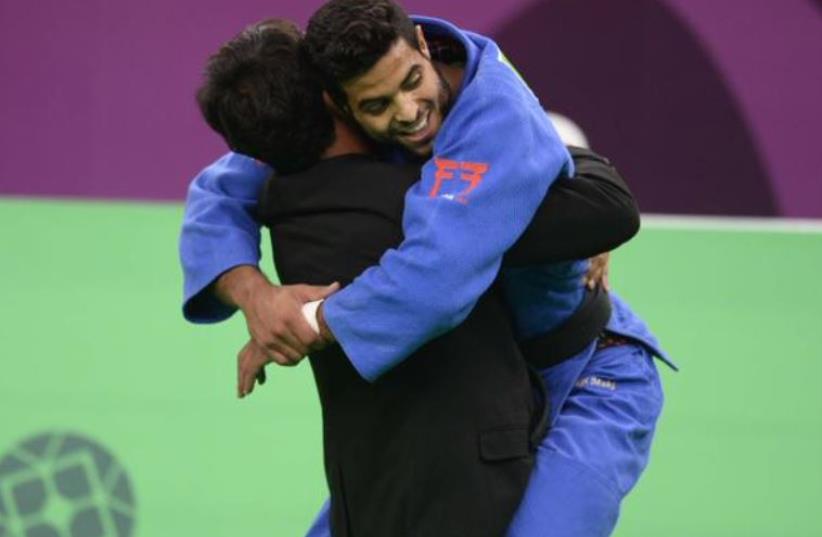 Israeli judoka Sagi Muki wins the gold medal in Baku
(photo credit: OCI)
Advertisement
The European Games will come to a close in Baku, Azerbaijan on Sunday after a dream weekend saw the Israeli delegation take its medal haul to 12, including two golds.Sagi Muki became the first Israeli to claim a gold medal at the European Games after winning the judo under-73 kilogram competition on Friday.There were two more medals for the Israel in the judo competitions in Baku, which were also acting as this year’s European Championships, with former world champion Yarden Gerbi taking a bronze medal in the women’s under-63kg event, while Or Sasson won on Saturday a silver medal in the men’s over-100kg contest.Israel’s second gold medal came on Saturday courtesy of 18-year-old swimmer, Ziv Kalontarov. He was crowned as European youth champion after setting a senior national record of 22.16 seconds in the 50-meter freestyle final, booking his place at Rio 2016 after meeting the Olympic qualifying time standards for next summer.The swimming events in Baku were contested only by junior athletes and replaced this year’s youth continental championships.On Friday, Muki became just the sixth Israeli to win a gold medal at the European Judo Championships, joining Yael Arad (1993) and Arik Ze’evi (2001, 2003, 2004, 2012).He overcame previous European champion Dex Elmont in the quarterfinals and secured first place with an ippon against Georgian Nugzari Tatalashvili 44 seconds to the end of the final.“I’m really happy that I managed to be at my best in the competition,” said the 23-yearold Muki. “I felt really strong and sharp. I always believed that I could do this. It is really fun to represent the country and I was very proud to hear the national anthem in Azerbaijan.”The men’s national team coach, Oren Smadja, was full of praise for his young protege.“Sagi put on an amazing performance against top competition,” he said.“He fights until his last breath and gives his all for the country and the flag. He has shown how determined he is all along.There have been failures along the way, but once you believe in something and you are willing to do everything to achieve it you reach moments like this.”Gerbi was beaten by Tina Trstenjak of Slovenia in the semifinals, but bounced back to overcome Ana Cachola of Portugal in the fight for the bronze, claiming her third medal in four years at the continental showcase.“Three medals at the European Championships is pretty good and I’m very happy to have won a medal, but bronze is not gold,” said Gerbi.“I’m not disappointing, but I really wanted the gold because I have yet to have won the European Championships. I experienced a tough day and I’m not at my best, but I came through.”After a superb day of fighting, Sasson had to settle for a silver medal on Saturday following a defeat to Georgian Adam Okruashvili in the final.“I ended the final with mixed emotions because I did manage to excel and go far, but still lost to someone I have beaten before,” Sasson explained. “To be a European silver medalist is certainly my most impressive accomplishment to date and I hope that I can build on this after coming through a rough period.”