NFL delegation to land in Holy Land next week

The group of 11 players will tour Israel for a week, with their trip to include visits to Jerusalem, Tel Aviv and the Dead Sea. 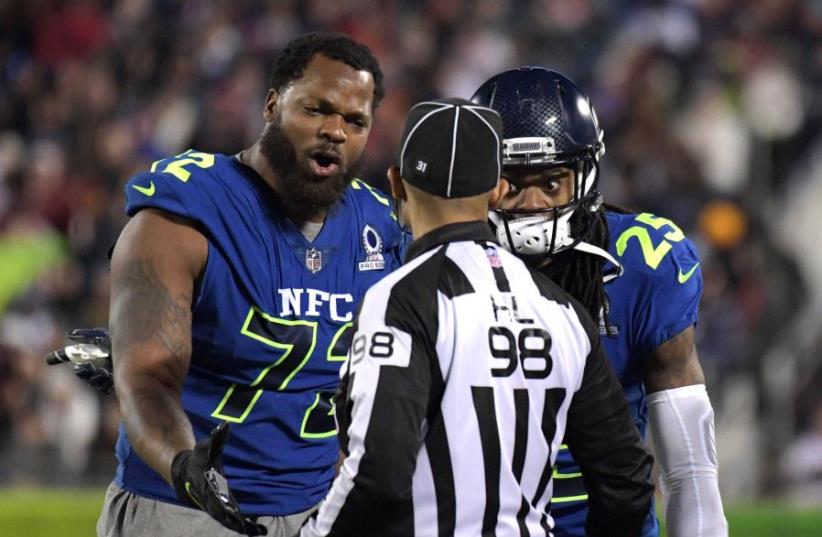 NFC defensive end Michael Bennett (72) and cornerback Richard Sherman (25) of the Seattle Seahawks
(photo credit: REUTERS)
Advertisement
A delegation of NFL players will arrive in Israel next week as part of a campaign to showcase the country's "true face" to the world, Public Security Minister Gilad Erdan announced on Sunday.The delegation will arrive next Monday as part of a joint initiative between the Ministry of Strategic Affairs and Public Diplomacy, also headed by Erdan, and the Tourism Ministry.The group of 11 players will tour Israel for a week, with their trip to include visits to Jerusalem, Tel Aviv and the Dead Sea.Among those visiting are former Super Bowl champions Michael Bennett and Cliff Avril, as well as Martellus Bennett, who was set to feature for the New England Patriots in Sunday's Super Bowl against Atlanta.Other players in the group include: Delanie Walker, Mychal Kendricks, Kenny Stills, Cameron Jordan, Calais Campbell, Carlos Hyde, Dan Williams and Justin Forsett.The delegation will also hold an exhibition game against Israel's national team in Jerusalem on Saturday, February 18."There is a great importance to the visit of a delegation of NFL stars to Israel," said Erdan. "I'm sure that this visit will be a great experience for them and that it will give them a balanced picture of Israel, opposite of the deceptive campaign being held against Israel across the world. The players will show their tens of millions of fans the true face of Israel. We are leading a campaign against the de-legitimization of Israel and part of this campaign is to arrange visits of celebrities in different fields, including sports." Minister of Tourism Yariv Levin echoed the same sentiment."Football players are a source of inspiration for the entire US population. I'm sure that due to their experiences in the country they will become loyal tourism ambassadors of Israel," explained Levin.