Israel’s Davis Cup team had already secured a victory over Sweden and another year in Group I by taking an unassailable 3-0 lead on Saturday. 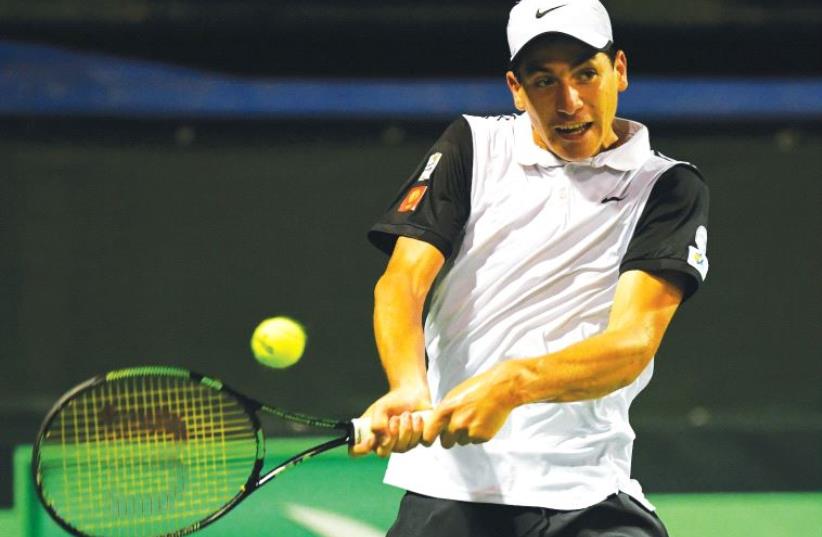 Israeli tennis fans got a look into the future on Sunday when Yshai Oliel won his exhibition match following the completion of the national team’s Davis Cup win over Sweden at Ramat Hasharon.
(photo credit: ALEX GOLDENSTEIN/ISRAEL TENNIS ASSOCIATION)
Advertisement
The couple of hundred people in attendance came for one reason alone.They were at Canada Stadium in Ramat Hasharon on Sunday evening to get a first-hand look at Yshai Oliel.He has yet to even celebrate his 17th birthday. And Sunday’s match won’t even go down in any official records.But Oliel’s 6-4, 6-4 win over Sweden’s Markus Eriksson gave Israeli tennis fans a look into the future, a reason for optimism for many years to come.Israel’s Davis Cup team had already secured a victory over Sweden and another year in Group I by taking an unassailable 3-0 lead on Saturday.That allowed Israel captain Eyal Ran and his counterpart Fredrik Rosengren to agree that the fifth rubber would not be played and an exhibition match would be held instead, meaning Oliel could play even though he wasn’t named in Israel’s four-man roster for the tie. He had trained with the team all week, but wasn’t included in the final squad.Oliel, who sits at No. 912 in the ATP world rankings and No. 31 in the ITF junior rankings, has long been heralded as the future of Israeli tennis. He showed what the hype is all about by beating an opponent who is 10 years his senior and ranked 456 places above him.“This is an amazing feeling,” said Oliel. “I’m really happy with the way I played. Thanks to the team and to Eyal for giving me a chance. I’ll work hard to succeed and to continue and represent Israel in the future.”Oliel is sure to have many opportunities to do so should he continue at his current rate of improvement.He reached the semifinals of the Futures tournament in Meitar, Israel, last month and has also impressed in junior action this year, making the last 16 in the singles event at the US Open and winning the boys’ doubles title at Roland Garros with Czech partner Patrik Rikl.Oliel has been making headlines even before he was a teenager. In December 2014, he became just the ninth boy to capture both the 12s and 14s titles at the Junior Orange Bowl International in Florida.The Junior Orange Bowl International Tennis Championship has a rich history of bringing the world’s most promising young tennis players to Coral Gables and is regarded as the unofficial world championships for youth players.Oliel, who won the 12s tournament in 2012, joined past champs Roger Federer, Andy Murray and Juan Martin del Potro. Other notable winners include Chris Evert, Andre Agassi, Monica Seles, Jim Courier, Andy Roddick and Caroline Wozniacki.Oliel became the second Israeli to lift an Orange Bowl title, with Shahar Pe’er claiming the girls’ 14s tournament in 2001.Winning in the Orange Bowl, or any other junior tournament, is of course no guarantee of success at the senior level. Plenty of junior Grand Slam winners and world No.1’s have failed to make the transition to the ATP Tour.That will be the true test for Oliel, who displayed on Sunday plenty of weapons that should help him down the road.“He is left-handed, which is an advantage, and he hits the ball very hard, making life difficult for his opponents. He also has a good serve,” said coach Jan Pochter, who has worked with Oliel since he was four years old.Hailing from Ramle, Oliel showcased all those skills against Eriksson, as well as excellent movement around the court even though he is still growing into his body.Oliel also has the financial backing required to reach the highest levels.He is a member of the David Squad, a private training organization which seeks to develop and train Israeli tennis players to be successful at the highest levels of international competition.“I am proud to be a part of David Squad, I am proud of the team, and I appreciate David Coffer, who sponsors us. I hope I will be able to give him back all that he expects,” Oliel told The Jerusalem Post at this year’s US Open.“Without the David Squad, we would not get to the tournaments and get to the next level,” noted Pochter. “This is a present for Israeli tennis that we have special people like David and Adam Coffer [David’s son]. It is like winning the lottery for these kids.”Adam Coffer is proud of Oliel and the David Squad team.“Yshai is an exceptional talent with a fantastic attitude. We are always so proud of him and the team. This is the natural progression reflecting the years of hard work he and all our team have put in. His progress also sets the right example for the extremely talented younger kids we have coming through the DS family. But it is not our or their end goal - there are many more, higher, targets ahead for him.”Despite all the attention he attracted on Sunday and ever since his Orange Bowl triumphs, Pochter said Oliel remains level headed and is ready to take the next step in his progression as a player.“I don’t think there is a kid in Israel or the world who has received the amount of attention he has received since such a young age,” he explained. “He grew up in this environment, but he hasn’t given many interviews recently and is focusing on tennis and hard work. I think he is ready.”If anyone had any doubt, Sunday’s impressive performance proved once and for all that Oliel is a diamond in the rough, with diamond being the keyword.Plenty of polishing and perhaps even some cutting will be required before Oliel will become the final shining product. It will be a process Israeli tennis fans, and local sports as a whole, will be following with bated breath and plenty of excitement.allon@jpost.com