Only about 150,000 people visited national parks this Independence Day, compared to over 1 million in 2014. 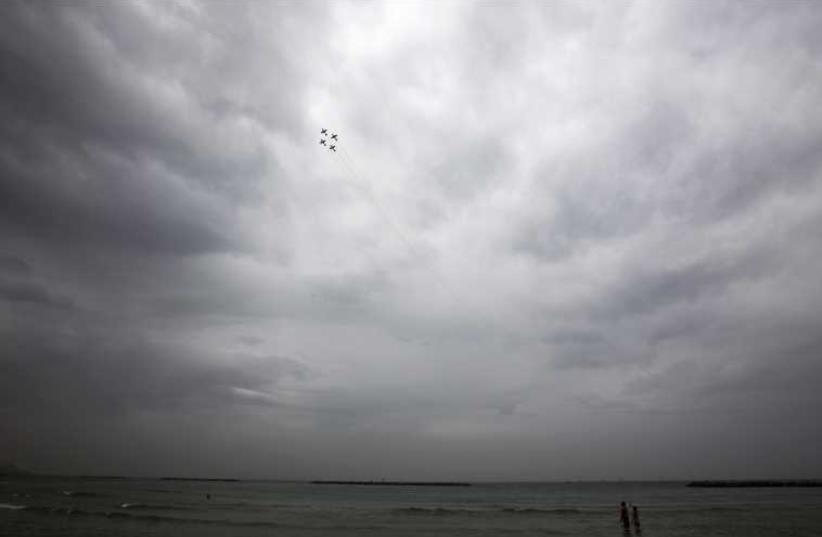 People walk on the beach as Israeli Air Force planes fly above during an aerial show as part of celebrations for Israel's Independence Day, in Tel Aviv May 6, 2014
(photo credit: REUTERS)
Advertisement
Deterred by intermittent rain throughout the country on Thursday, only about 150,000 revelers traveled to the parks, forests and nature reserves for the 67th Independence Day.While some families ventured out for their barbecues and hikes despite the weather, the numbers of park visitors paled in comparison to last year’s more than 1 million.Keren Kayemeth LeIsrael-Jewish National Fund reported about 100,000 travelers to its forests and parks, while the Israel Nature and Parks Authority said around 50,000 came to its sites.“I’ve worked in KKL-JNF for 30 years,” said Hanoch Tzoref, regional director of the Jerusalem Hills and Adullam forests. “Throughout my years as a forester and regional director, I do not remember an Independence Day with such low traveler movement.”Snow fell over Mount Hermon in the afternoon as light rain sprinkled over areas around the rest of the country.About 4 millimeters of rain accumulated in Safed, while about 2 mm. fell in Haifa and 0.8 mm. in the Lake Kinneret (Sea of Galilee) region, Israel Meteorological Service forecasters said. Jerusalem received about 0.8 mm., whereas the Coastal Plain got about 0.4 mm. and the Negev just drizzle.Meanwhile, hundreds of people who had received invitations to President Reuven Rivlin’s annual Independence Day reception for the diplomatic community were uninvited on Wednesday and Thursday following forecasts of inclement weather.The reception is usually held outside, and this year it was feared that even marquees set up in the gardens would not adequately protect guests from the wind and rain, and moving the event indoors would limit it in size. The event on Thursday morning honoring 120 outstanding soldiers from all branches of the Israel Defense Forces was held outside as planned, and guests were given blankets and umbrellas to help ward off the elements.At KKL-JNF sites around the country, the highest number of visitors arrived to the coastal and Shfela regions, where about 60,000 people visited sites including the Ben Shemen Forest, Canada Park, Tzora Forest, Eshtol Forest and Great Britain Park. In addition, a few thousand people came to the forests of the Jerusalem Hills.In the northern Negev, the Lahav, Yad Mordechai, Hamalachim and Givah 69 forests were popular, as was the KKL-JNF-organized Independence Day festival in Hevel Yatir, the organization said.KKL-JNF sites in the North had very few visitors, with most traffic occurring in the Beit Keshet Forest, Lavie Forest, Switzerland Forest and Hof Hacarmel Beach.Some 50,000 people visited INPA sites; the most popular were Ashkelon National Park, Eshkol Park, Einot Tzukim Nature Reserve and Masada National Park, the authority said.Overnight on Thursday and into Friday, the IMS predicted a continuation of unseasonably cool temperatures, with a chance of light rain in the North and along the coast on Friday morning. By Saturday, fair skies will likely replace the inclement weather, with a significant rise in temperatures, accompanied by strong northerly winds along the coast. The next two days will feature even higher temperatures, climbing to heat spell conditions by Monday, the IMS said.