Syrian representative to the UN: Israel has directly supported ISIS

Al-Jaafri made this startling accusation during a UNSC session dedicated to a debate about the situation in Syria and made further claims about Israel's alleged motives in helping the terror group. 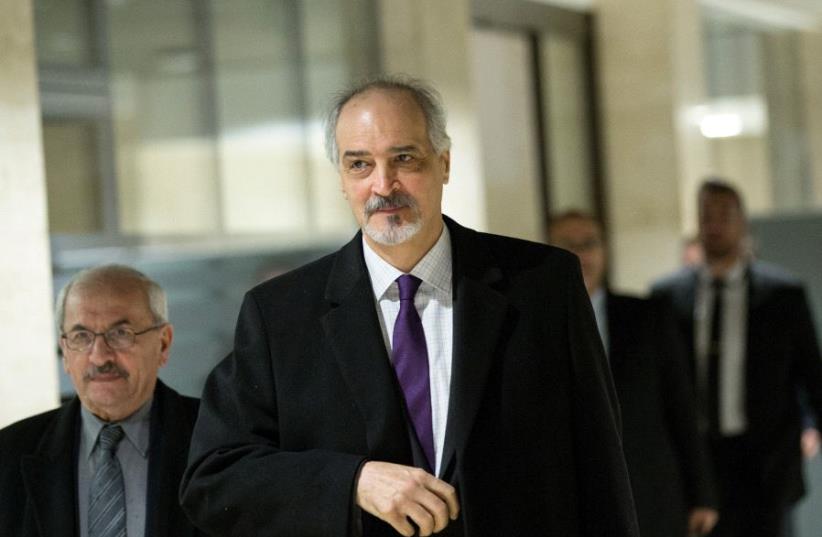 Syrian envoy to the UN, Bashar al-Jaafri.
(photo credit: REUTERS)
Advertisement
Syrian Permanent Representative to the UN Bashar al-Jaafari on Wednesday accused Israel of supporting Islamic State in Syria and indirectly, but significantly, aiding the terrorist group.Israel directly supported the jihadist organization by bombing Syrian regime sites, Jaafari told the UN Security Council at a session devoted to the ongoing catastrophe in the wartorn nation.“The direct Israeli support to ISIL, through attacking Syrian Army sites in Palmyra city on March 17, 2017, added fuel to the fire and made things worse,” he said, referring to a recent strike on a Hezbollah weapons convoy by the Israel Air Force. The Syrian regime retaliated by launching a surface-to-air missile at IAF jets. That attempt failed when an Arrow missile intercepted the incoming weapon.

Jaafari also accused Israel of treating injured al-Qaida terrorists.
Syrians , victims of Syria civil war, receive medical treatment and help from Israel , Jan. 24, 2017 (credit: REUTERS)
Israel has treated wounded Syrians at the border on the Golan Heights, and given humanitarian aid to refugees fleeing the Syrian civil war since 2013. In approximately four years, Israel has provided medical care to some 3,000 Syrians.According to Jaafari, the United States was complicit in aiding Islamic State and other rebels fighting the Assad regime. “[It was] the same scene on April 7, 2017, when the US administration and its allies felt that the terrorist groups began to retreat,” he said. “So they committed their flagrant aggression against Shayrat Air Base under pretexts of [Syria] using chemical weapons in the terrorist- held town of Khan Sheikhoun.”Jaafari said the US “fabricated” events to justify attacking the airbase, and that its real purpose was to “rescue armed terrorist groups.” He charged the US with moving from “proxy aggression” to direct military action.The Syrian envoy accused Washington, France, the UK, Israel, Saudi Arabia, Qatar, Turkey and Jordan, of provided rebel groups linked to al-Qaida – such as the Nusra Front – with chemical weapons for use against Syria, then claiming Syria used them.“This serious aggression had been plotted long in advance inside the secret rooms of intelligence agencies of Tel Aviv, Riyadh, Doha, Ankara, Amman, Washington, London and Paris,” Jaafari said.Meanwhile, US State Department spokesman Mark Toner said on Tuesday Hezbollah should immediately withdraw from Syria, because by fighting for the Assad regime, the Lebanese Shi’ite terrorist group was violating the Baabda Declaration, a 2012 agreement that called on Lebanon to distance itself from regional conflicts, including the one in Syrian.Toner – responding to a question about threats by Hezbollah to respond “with all the means that we have” to further strikes – called the group “unconstructive” and it had enabled the Assad regime to “perpetuate its brutality against its own people and also to incite instability in Lebanon.”Hezbollah called the strike on a Syrian airbase by the US an “idiotic step” toward “great and dangerous tensions” in the Middle East.While Hezbollah got bogged down fighting for Assad, it gained immeasurable battlefield experience and significant technological advancement, and has remained as one of the world’s most prominent terrorist organizations.
Advertisement
Subscribe for our daily newsletter