‘There was uncertainty, there was a lot of chaos, and there was fear’ 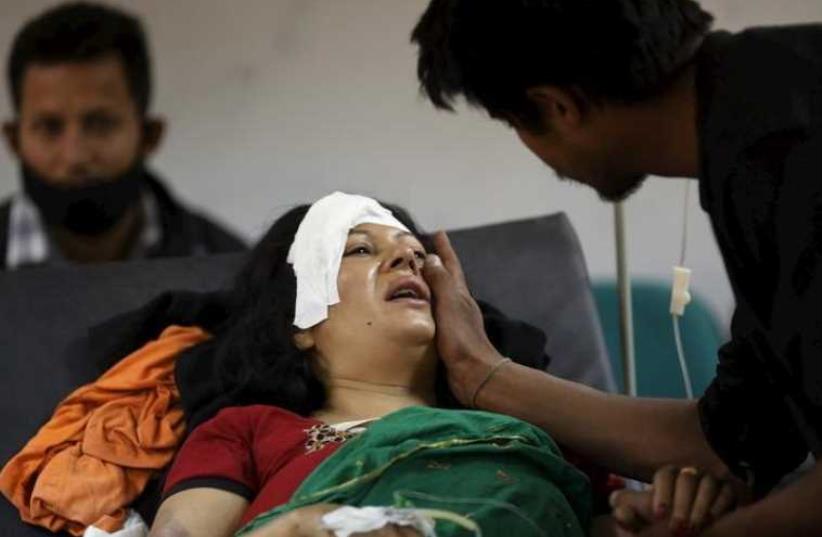 A boy comforts his mother who was injured during an earthquake, at a trauma center in Kathmandu
(photo credit: REUTERS)
Advertisement
Yossi Filiba is stuck in Nepal.He is a single father from Tel Aviv who was in Nepal for the birth of his three-week-old surrogate daughter, Na’ama Filiba, along with his brother. They are staying in a hotel in Patan, located in the south-central part of the Kathmandu Valley.Filiba says Saturday was peaceful until about noon, when his third floor hotel room started violently shaking.“Instinctively I ran, grabbed my baby, and ran down the three flights of stairs and ran out to the open area,” he described. “What happened – it kept moving, it was strong.Very strong. It was scary.”Filiba says there were walls falling down around them and they could see cracks forming in the buildings.“There was uncertainty, there was a lot of chaos, and there was fear,” he said. The hotel occupants stayed outside for five hours, afraid to go back into the building while the aftershocks were still going on.Two days after the earthquake, he says, there are still aftershocks and it’s difficult to go outside – it’s cold out and he’s with a baby. They spend most of the day sitting on the ground floor and running in and out of the building when they feel shaking.The hotel is running on a generator and has sporadic electricity. Filiba says he watches Israeli news when he can and they are waiting to come home. He hopes they will be able to come home on Monday, when more planes are scheduled to come. As he mentions the planes being sent over from Israel, he notes that the feeling of unity when disaster strikes fills him with pride.Filiba is with two other Israeli families in the hotel: one is still waiting for their baby to be born, the other family is with newborn twins.The surrogate mothers are not with them in their hotel but he stresses that he would be very happy to see the pregnant women brought over to Israel. “The hospital didn’t collapse but the inside is damaged and not fit for giving birth,” he says.Despite the magnitude of the quake, Doron Mamet- Meged, CEO of Tammuz International Surrogacy, reported that he is in touch with all of his clients, 52 Israelis, including Filiba, who are currently staying in hotels or at the embassy. As of Sunday evening, some of the new families are on their way home, others are awaiting flights back to Israel.Tammuz International Surrogacy is a Tel Aviv-based company that assists Israeli couples, both homosexual and heterosexual, and single parents in fulfilling their dreams to become a family with the help of surrogate mothers from Nepal. The recent earthquake, ranking 7.8 on the Richter scale, put those families, their newborn children and the pregnant women at risk.Of the approximately 100 pregnant surrogate mothers to Israeli children in Nepal, some 20 of them are towards the end of their pregnancies and their fate is still unclear.According to Mamet-Meged, the Nepalese infrastructure is not functioning properly and if the women go into labor and have any complications, they and the unborn children will be at risk.The Justice Ministry announced Sunday afternoon that they have not ruled against the option of allowing the pregnant mothers passage into Israel to give birth in a safe environment. The ministry noted that there are policy, health and legal hurdles to overcome and they are assisting the various ministries in dealing with the issues so as to allow those women who seek passage entry into Israel.The Interior Ministry, also announced on Sunday afternoon that the Justice Ministry supports minister Gilad Erdan’s position to allow the heavily pregnant women into Israel, allowing them access to a safe birthing environment.As of Sunday evening, there are reports that some of these women will be allowed into Israel to give birth. Mamet- Meged says he is still unable to bring over the approximately 20 surrogate mothers in his employ who are due to give birth very soon.