Israel and Russia - using gestures to cement a critical relationship

Love him or hate him, Russian President Vladimir Putin is a key actor in the region. 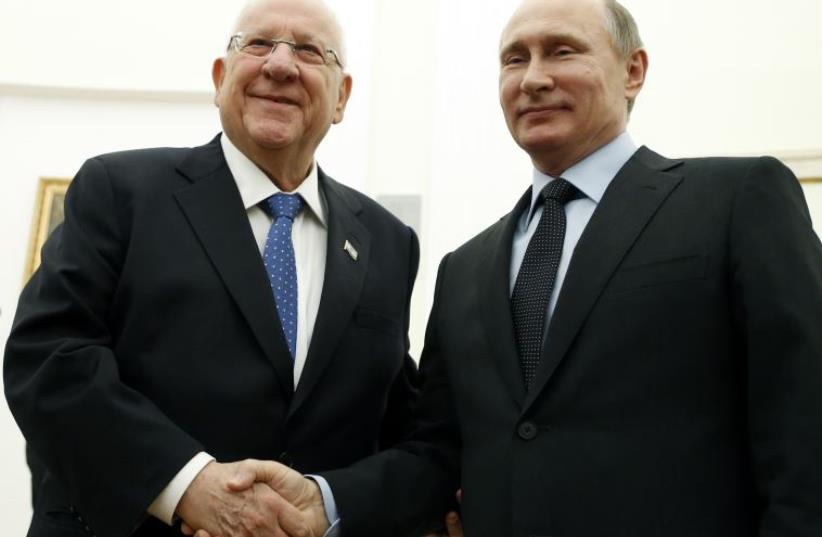 Russian President Vladimir Putin (R) welcomes his Israeli counterpart Reuven Rivlin during a meeting at the Kremlin in Moscow, on March 16, 2016
(photo credit: MAXIM SHIPENKOV / POOL / AFP)
The development of strong Israeli-Russian relations is one of the unsung successes of Prime Minister Benjamin Netanyahu’s tenure.Love him or hate him, Russian President Vladimir Putin is a key actor in the region and somebody who – if he would so desire – could make life for Israel extremely difficult.That he doesn’t do so – that Moscow does not intercept Israeli planes or missiles reportedly hitting Iranian assets in Syria from time to time, but rather coordinates with Jerusalem so the two militaries don’t accidentally clash in the skies above Damascus and Aleppo – is a testament to the very strong relations between the two countries.That these relations are so strong is not only because of Netanyahu. Russia has an interest in close ties with Israel in the region as well, since Israel can also make it more difficult for the Kremlin to achieve its goals in the region. But the personal ties at the top of the Israel-Russia pyramid are extremely important.In Israel’s ties with the United States, where the relationship between the two countries is broad and deep and spans Congress, as well as the defense, intelligence and business communities, the personal relationship between the US president and the Israeli prime minister – while important – is not everything.This was proven during the Obama administration, when Netanyahu had a famously rocky relationship with Barack Obama. Nevertheless, the US-Israel relationship continued to flourish because it was not just dependent on one man.That is not the same situation with Russia. In Russia, Putin is the engine behind the relationship with Israel, and therefore, a good relationship with him is critical.For instance, in September 2018, when an errant Syrian missile aimed at Israel hit a Russian spy plane instead and killed 15 airmen, the Russian defense establishment was interested in a strong response against Israel. Putin was not, and the incident passed with no lasting damage to Israeli-Russian ties. Israel’s coordination with Russia in Syria continued.That was not a given.Netanyahu has worked hard and invested much in his relationship with Putin. The Russian president is the world leader who Netanyahu has met more than any other over his last decade in office – more than the US presidents, more than the European presidents, prime ministers and chancellors.And a key element that Netanyahu identified early that would help grease the relationship with Putin was a recognition of the Red Army’s role in the defeat of the Nazis, something that the Kremlin believes is not sufficiently recognized in the West.It was not by coincidence, therefore, that on Netanyahu’s first visit to Moscow in February 2010 after being elected as prime minister a few months earlier, he announced that Israel would erect a memorial in Netanya commemorating the Red Army’s role in World War II.Putin came to Israel in 2012, the last time he was here, to dedicate that monument, just as he will be dedicating a memorial commemorating the siege of Leningrad (now St. Petersburg, his hometown) on Thursday in Jerusalem’s Sacher Park. Netanyahu announced that project when he was in Moscow in 2018.And what makes these monuments significant to Putin and the Russian leadership is that they are going up as statues and monuments to the Red Army’s fight against the Nazis have been torn down in much of Eastern Europe, from the Baltics through Hungary and Poland.In diplomacy, gestures are not insignificant, and Netanyahu has made it a point that at every public meeting with Putin since becoming prime minister, he mentions the Russian role in defeating Hitler.Not only has Israel built monuments, but in 2017 the Knesset passed a law establishing Victory in Europe Day on May 9 – the day the war ended in 1945 – as a national holiday. Outside of Russia and former Soviet states such as Belarus and Kazakhstan, Israel is one of the few countries in the world that formally marks that day.As Russian Ambassador to Israel Anatoly Viktorov told The Jerusalem Post over a year ago, the establishment of that day as a national holiday in Israel is “extremely important. You should not underestimate its importance.”Unfortunately, the ambassador said, “many countries – including some former members of the anti-Hitler coalition – are engaging in revisionist history of World War II because of political considerations and are not that strong in combating manifestations of neo-Nazism and racism. So to have the leadership and people of Israel as a friend in this common fight is very, very important.”Gestures like the dedication of the monument on Thursday in a central Jerusalem location, therefore, are not unimportant, and Netanyahu has used them well over the last 10 years to bring the two countries closer than anyone would have imagined some 31 years ago, before the Soviet Union crumbled.