The Israeli medical and rescuedelegation which was sent to assist in an international disaster relief effortin Haiti returned to Israel on Thursday, 16 days after a after a 7.1-magnitude earthquake hit the nation.

Prime Minister Binyamin Netanyahuaddressed the crowd of family members, IDF brass and lawmakers gathered on thetarmac at Ben-Gurion International Airport .“Forty-eight hours after [the earthquake], on January 15, the [Israeli] teamwas already on its way. The plan was to set up the field hospital in 20 hours;it was up in about half that amount of time.” 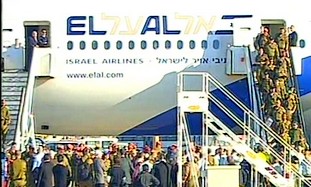 The prime minister praised thedelegation for “elevating the name of the IDF, and the state of Israel.” Noting his recent trip to Nazideath camps in Europe to commemorate International Holocaust Remembrance Day,Netanyahu said that unlike in Haiti,during the Shoah, “nobody came in time.”

He congratulated the team on “a jobwell done.”

Barak also spoke at the ceremony,thanking the delegation for their “contribution to the greater good.”

Home FrontBrig.-Gen. Shalom Ben-Aryeh, commander of the delegation, described theextent of the destruction which the delegation witnessed in Haiti , including thecomplete collapse of all government buildings and institutions.He praised the team, noting that everyone they treated would have died if notfor their efforts.

After rescuing Haitian trapped inrubble, he said, they went into “Phase 2,” distributing aid to the devastatedpopulation, many of whom were left homeless after the quake.

He said that they decided to packup the IDF field hospital and return to only when it wasapparent that the United Nations, the ,and local institutions could deal with the situation.

IDF Chief of General Staff Lt.-GenGabi Ashkenazi addressed the gathering after Ben-Aryeh,congratulating the team, which he called “a source of pride” for .He said their efforts in saving lives “broke new barriers.”

More than 900 people were treatedat the IDF field hospital in the last two weeks, and the Israeli team receivedinternational praise for its work.

Earlier in the week, the IDF said thedecision came following the arrival of additional aid forces to Haiti,including members of the US military and other civilian aid-givers who arenow providing regular medical services. Furthermore, many of the localhospitals are at a sufficient level of functionality, the army had said.
Advertisement
Subscribe for our daily newsletter