The striking similarities between Trump and Netanyahu

“Both men [Trump and Netanyahu] and their supporters view themselves as being locked in a war with their political foes in which no quarter can be given or received."

By SHLOMO MAITAL
MARCH 9, 2018 23:56
Prime Minister Benjamin Netanyahu shakes hands with US President Donald Trump at the World Economic Forum annual meeting in Davos, Switzerland, on January 25, 2018
(photo credit: REUTERS/CARLOS BARRIA)
Advertisement
DURING A recent visit to the US, I spoke both formally and informally to Jewish groups. On one occasion, as I spoke about Israel’s leadership and politics, I stopped in mid-sentence, and my audience and I shared an epiphany.“Israel and the US,” we agreed. “Striking similarities.” In a word: Trumpenyahu.We all shook our heads at how each of the two countries is led by divisive, polarizing and embattled heads of government, entrenched in deeply dysfunctional democracies.Israel’s Prime Minister Benjamin Netanyahu, facing indictment for bribery and corruption, greatly admires America’s impulsive, tweeting President and copies him.Both Trump and Netanyahu have “base” followers (double meaning intended) who stubbornly excuse the vilest of behaviors their idols exhibit, believing it is the educated elites who are out to get their leaders.Here are several areas in which Israel, the US and their respective leaders are Bobbsey twins.The ever-loyal base: According to Jonathan S. Tobin, editor of the Jewish News Syndicate, “Both men [Trump and Netanyahu] and their supporters view themselves as being locked in a war with their political foes in which no quarter can be given or received.“Both Israel and the United States are suffering from the same malady: a bifurcated political culture in which many on the left and the right no longer read, listen or watch the same media and thus don’t listen to, let alone trust, the narratives accepted by those on the other side of the aisle.”Tobin is no leftist. He writes at times for the conservative National Review.Netanyahu and Trump supporters are purposefully myopic. According to Carnegie Mellon University Professors George Loewenstein, Russell Golman and David Hagmann, people select their own reality by deliberately avoiding information that threatens their happiness and well-being. In a research paper published in the Journal of Economic Literature, they show that people have a wide range of information avoidance strategies at their disposal. They are remarkably adept at selectively directing their attention to information that affirms what they believe or that reflects favorably upon them, and at forgetting information they wish was not true. This is increasingly true of both Americans and Israelis.Selective exposure is a psychological theory, which shows how people favor information that reinforces their pre-existing views while avoiding contradictory information.Selective exposure has also been known and defined as “congeniality bias” or “confirmation bias.” Trump supporters watch Fox News. Netanyahu supporters read Israel Today. Neither media outlet takes their idol to task. Those who seek only news that supports their views are highly vulnerable to manipulation, because, often, they will believe anything.Israel Today, a freebie daily funded by American billionaire Sheldon Adelson, has a Facebook page. A survey of its followers asked whether the “investigation of Prime Minister Netanyahu was part of the war on corruption or a political witch hunt. Some 72% answered, “witch hunt” and only 28% answered, “war on corruption,” despite the overwhelming evidence, including state’s witnesses, and an impending indictment. 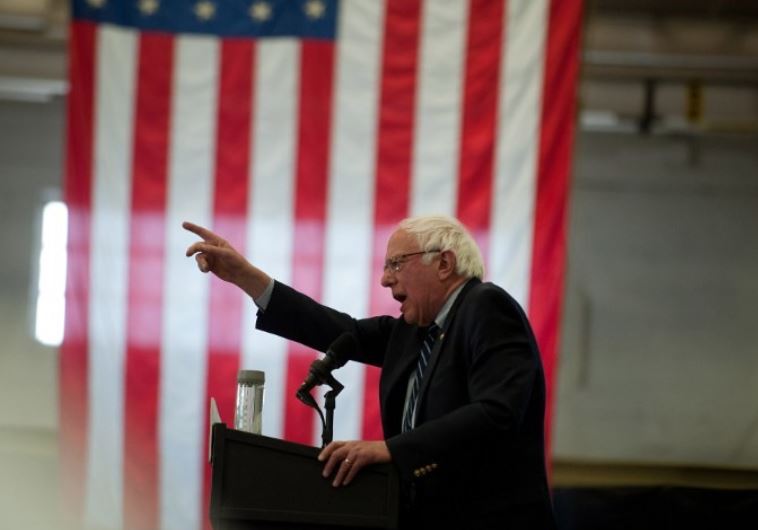 Democratic presidential candidate Bernie Sanders speaks to supporters in Pittsburgh / AFP PHOTO Capitalism gone awry: Yale University Law Professor Amy Chua, writing in the opinion section of The New York Times, explained, “Capitalism creates a small number of very wealthy people, while democracy potentially empowers a poor majority resentful of that wealth. In the wrong conditions, that tension can set in motion intensely destructive politics.“All over the world, one circumstance in particular has invariably had this effect: the presence of a market-dominant minority, a minority group, perceived by the rest of the population as outsiders, who control vastly disproportionate amounts of a nation’s wealth. Democracy becomes not a vehicle for e pluribus unum [out of many – one, America’s motto] but a zero-sum tribalist contest.”IT IS supremely ironic that the white American underclass tribe has chosen Trump, a billionaire, as its defender and spokesperson.Thomas Pickering, former US ambassador to Israel, writing in The New York Times with business consultant James Stoutenberg, observed: “Mr. Trump stumbled to victory using mendacious appeals to voters squeezed by a greedy economy – even though Mr. Trump had himself profited handsomely from that economy.”Netanyahu is no pauper, either. According to Forbes magazine, as of 2015 “Prime Minister Benjamin Netanyahu placed fourth on the list of Israeli politicians, ringing in a [personal] fortune of around $11 million − significantly less than Israel’s wealthiest politician but, surprisingly, surpassing the leading politician of the United States, former President Barack Obama, with an estimated net worth $7 million. Netanyahu’s millions stem primarily from public speaking fees and work as a strategic adviser.”Transparency International’s corruption perception index (CPI) measures the degree to which countries are perceived to be corruption-free. In the latest survey, Israel dropped from 28th to 32nd. Among the 35 members of the OECD, Israel is ranked 23rd. In corruption, Israel trails Germany, Australia, Hong Kong, Iceland, Belgium, the US, Ireland, Japan, Estonia, the UAE, France, Uruguay, Barbados, Bhutan, Chile, the Bahamas, Portugal, Qatar, Taiwan and the Sultanate of Brunei.According to the business daily The Marker, 17 companies listed on the Tel Aviv Stock Exchange are being (or have been) investigated in some form or other, whether for graft, theft, or in one case mounting an attack on a foreign country to demonstrate a for-sale drone. The combined market value of the companies embroiled in one investigation or another is around 200 billion shekels ($57 billion) or close to a quarter of the TASE’s total market capitalization. 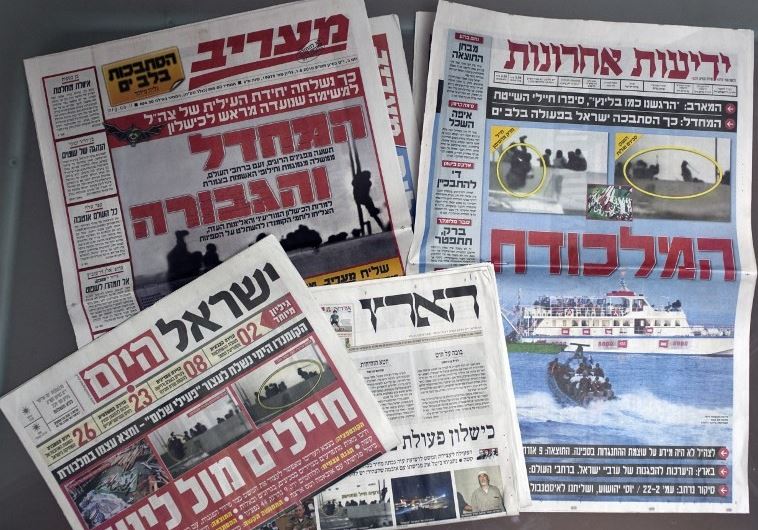 Israeli newspapers / AFP PHOTO Obsession with the media: The list of mass media with which Netanyahu allegedly interfered includes: Print dailies –Yedioth Ahronoth, Israel Today and Ma’ariv (until 2012); Radio – Reshet Bet, Galei Tzahal, regional radio; Internet – Walla and Ynet; TV – Channels 1, 2, 10, the Knesset channel and Channel 20.Netanyahu is now suspected of having killed former Communications Minister Gilad Erdan’s plan to reform the telecom industry, an act that would have hurt tycoon Shaul Elovitz, a Netanyahu ally who bought control of Bezeq, the telecom giant.Both Trump and Netanyahu are obsessed with media coverage. Netanyahu went so far as to include in the coalition agreement, which established his latest government, a clause giving him the sole right to shape legislation regarding the media.Trump regularly lambasts “fake news.”Netanyahu has taken to doing the same.

Bulging budgets: The ballooning federal budget deficit under President Donald Trump will force the US Treasury to borrow more than $1 trillion this year. When governments borrow, they crowd out private borrowers. This, despite the Republic Party’s vendetta against Obama’s deficit spending.That is “exactly the opposite of what the economic textbooks say lawmakers should be doing,” Mark Zandi, chief economist of Moody’s Analytics Inc., noted recently.“Deficit financed tax cuts and spending increases in a full-employment economy will result in more Fed tightening and higher interest rates.”THE TRUMP Administration has made hypocrisy an essential element of everything it does, with the unqualified support of Republicans, both in the House and Senate.The latest two-year budget calls for massive $300 billion spending increases in defense and non-defense items, without showing how to pay for them. Add this to an unfunded tax cut. The result? The ratio of debt to GDP will rise to 109% by 2027, and the spending bill will add $1.2 trillion to the deficit by 2019.Under Obama, the Republicans rioted over Obama’s free-spending budgets. But deficits have risen far more under Republican presidents (remember Reagan’s tax cuts, unfunded?) than under Clinton and Obama. Clinton in fact balanced the budget.Obama ran a small deficit.Under Trump the US is on a trajectory to soon join the list of countries with triple digit (over 100%) debt to GDP ratios: Portugal, Italy, Eritrea, Belgium, Mozambique, and Japan. Trump recently addressed the Conservative Political Action Committee to resounding cheers. Apparently, deficits matter only when Democrats create them.So far, Netanyahu has yet to match Trump’s hypocritical budget-busting, perhaps because of Finance Minister Moshe Kahlon. Israel’s Finance Ministry proposed a 479 billion-shekel ($139 billion) spending plan for 2019 that would pay off some of the government’s debt and widen the state deficit. The budget plan prioritized education ahead of defense, allotting schooling 57 billion shekels compared to 56 billion shekels for security. The proposal also raises the 2019 deficit target to 2.9 percent from the government’s previous 2.5 percent goal for the year. There are fears of a backroom deal that would add several more billion shekels to the perpetually hungry defense budget. 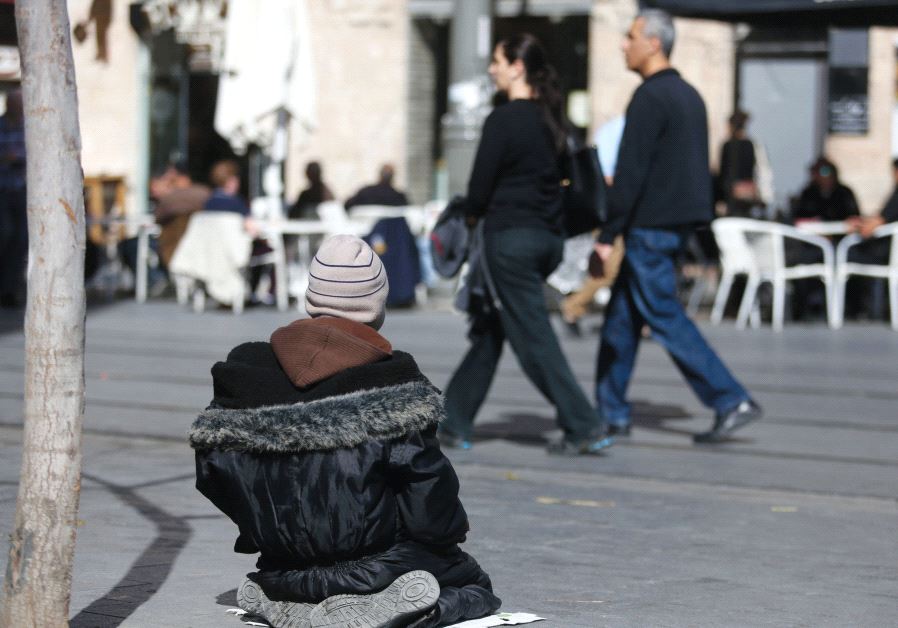 A homeless person in Jerusalem / MARC ISRAEL SELLEMNeglected underclass: A recent poll by the Midgam Institute (led by Manu Geva and Dr. Mina Tzemach), published on February 24, showed that if elections were held today, the Likud would win, with 28 MKs, followed by Yair Lapid’s Yesh Atid with 24 and the Zionist Union with only 15.The Likud’s political strength actually rose compared with a previous poll, despite Netanyahu’s widely publicized transgressions.The veteran political commentator Yossi Klein recently asked in Haaretz, “How is it possible that after all the investigations, the suspects, the cases and earthquakes, after everything is out in the open, Likud gets more than two additional Knesset seats in the polls?” His answer, “It’s been there since the ’50s. It’s no good, it says on the wall. You screwed us then and now we’re getting back at you. Who are ‘we’ and who are ‘you’? ‘We’ are what you once called ‘the second Israel’ and today the ‘periphery.’ ‘We’ are the children of those you threw into all kinds of holes. And who are ‘you’? You are Mapai, you are the police, you are the media, you are the state. We understand all too well what bribery is, they’re saying, but we’re punishing you and ignoring it.”Trump and Netanyahu share a loyal base, which feels cheated, deprived, ignored, swindled and oppressed. As a result, both Israel and the US now have tribal politics.Both have electorates that say, “I’m voting for my man, from my tribe, and I really don’t care if he threw his mother off a bridge.”There are some major differences between the two men. Tobin, writing in the daily Haaretz, noted, “...the two men [Netanyahu and Trump] couldn’t be any more different. If anything, Netanyahu is very similar to former President Obama … both men are arrogant intellectuals who have a low tolerance for criticism, a factor that contributed to their quarrels.”One can make a case that Netanyahu is smarter and better educated than Trump.Netanyahu has two degrees from MIT, one in architecture and one in management. At the same time he was studying towards a Harvard doctorate in political science until he broke off his studies after the death of his brother in Operation Entebbe.Benjamin Netanyahu has been prime minister of Israel and leader of the Likud party from 1996-1999 and 2009-2018. Unless he calls a snap election later this year, which is possible, he will serve out his term in office until the 2019 national elections.It is clearly to his advantage to defend himself in court as prime minister than as Bibi Citizen. Next year, on July 17, 2019, he will become the longest serving Israeli prime minister in history, ahead of David Ben-Gurion.To paraphrase the British historian Lord Acton: Power corrupts; excessively prolonged, entrenched power corrupts absolutely.I fear that Israel and the US are apparently fated to live for years to come with Trumpenyahu. The writer is senior research fellow at the S. Neaman Institute, Technion and blogs at www.timnovate.wordpress.com