What kind of leader do the Jewish people really want? 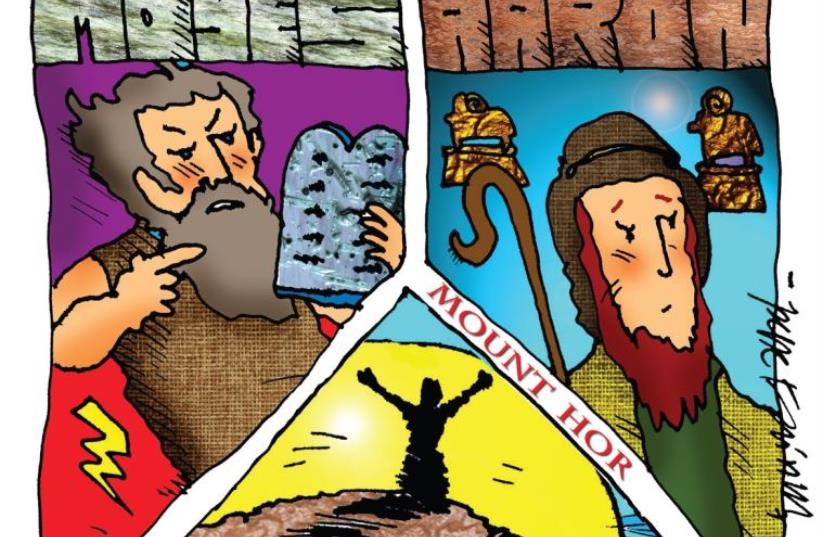 Drawing by Pepe Fainberg
(photo credit: PEPE FAINBERG)
OUR MOST lengthy foundational story features two possible leadership candidates, Moses and Aaron.Moses is the strong, take-no-prisoners type. Aaron is the peacemaker. There is no record of an election in Sinai, but the Torah’s obituary columns give us a clue to the popular favorite.“Aaron the priest ascended Mount Hor at the command of the Lord and died there, in the fortieth year after the Israelites had left the land of Egypt, on the first day of the fifth month.” Now you can look through the whole Bible and you will not find anybody else’s date of death, including that of Moses himself.
Read More...
And what about the shiva or the sheloshim mourning periods? Well, here too we are surprised.In the Bible we are told that “the entire house of Israel mourned Aaron’s death for 30 days,” while all we hear is that “the children of Israel mourned Moses’s death.”We are surprised because Aaron seems to have been an unlikely people’s favorite. It was Aaron who officiated at the forging of the Golden Calf, a very dark moment in our history, which led to many deaths. Worse, when his brother Moses asked him how he could have done that, Aaron opined that he really had no intention of making a calf but when he threw the molten gold into the cauldron, out came a calf.This is the same Aaron whose only response was silence when his sons were killed by God for no obvious reason on what should have been the happiest day of his and their lives. He doesn’t seem like a great leader. Why would the people mourn his loss far more than that of Moses? The answer teaches us a lot about the kind of leader that people prefer.The rabbis, who provide the answer, started from our same questions about the mourning for Aaron, but they, unlike us, seem to have started from a position of affection. Look at the aggadic work “Avot de-Rabbi Natan.” The sages ask, “Why did the entire house of Israel mourn [for Aaron]?” Their answer: “Aaron rendered judgment according to truth. He would never say to a man or woman, ‘You have acted offensively.’” With Moses, who often pointed out people’s deficiencies, there simply wasn’t as much fervor for mourning his loss.Similarly, in Pirkei Avot, the sages famously told us what kind of person we should be, using Aaron as a role model. “Be of the disciples of Aaron, loving peace and pursuing it, loving your fellow creatures and bringing them near to the Torah.”The role of Aaron then, a role we should try to replicate because it is the role of all authentic religious leadership, is to unite people, never to divide them. There is the sense, hard to document from the plain text of the Torah, that Aaron, unlike Moses, came down from his high mountain and worked with the people.Finally, Aaron’s place in history is secured by the coincidence of his date of death with the beginning of the Hebrew month Av. Av is best known for the fast day of national mourning and soul-searching on its ninth day. Tisha B’av commemorates the tragic destruction of the first and second Temples, the latter caused not so much by the Roman legions as by our internal bickering.So, on Tisha B’av, we are supposed to remember to love our fellow creatures and to be agents of peace-making – in other words, to be true disciples of Aaron, loving peace and pursuing it, loving all our fellow creatures and drawing them together in love of Torah.Regarding many of the conflicts between peoples in the world today, including that between Israel and its neighbors, we search for leaders who have some Aaron within themselves. They are not so easy to find. History, ancient and modern, usually gives more attention to figures more like Moses, to the uncompromising leaders.Indeed, we often need them. But in our Torah, it was Aaron whose death was marked and mourned in a way unlike any other. This is no accident.We want leaders who unite people, not divide them. As we prepare to mark Aaron’s yahrzeit, we need to rededicate ourselves to becoming his true disciples, and to pray that more will choose to do likewise.

Rabbi Bill Rudolph has just completed his term as a pulpit rabbi in Bethesda, Maryland. Prior to that he was a campus rabbi in Michigan and Associate International Director of Hillel.
Cancel Subscription
PREMIUM Log Out
Subscribe for our daily newsletter