Doing Design: One man's trash is another man's treasure

With designer Gurit Magen and her Junktion People an old and bruised bicycle or even a broken suitcase could become your next coffee table.

By EINAT KAYLESS ARGAMAN
Gurit Magen 311
(photo credit: Courtesy)
Advertisement
Einat Kayless Argaman founded DesignBreak in 2009 and since then has gained a large community of daily readers celebrating the design scene in Israel and beyond.The saying, “One man's trash is another man's treasure” is a motto for Gurit Magen and her Junktion People. In her design house of second chances, an old and bruised bicycle or even a broken suitcase could become your next coffee table. Starting out as an architect, Gurit had no idea what the future would hold. In 2008 she decided it was time to follow her heart and that was the beginning of Junktion. She took some time out to talk about how it all started and the inspiration behind her work.When did you first decide that you want to become a designer? It was a process. It wouldn’t be accurate to say I "decided" that this is what I wanted to become. I tried to understand what I wanted to do and what would keep me interested and curious in the long run. The process of choosing a name for the studio also helped a lot in defining the direction I wanted to take. 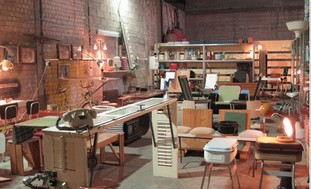 Where do you live? What stands out about living where you are, and how does it affect your creations? I live in the Central Bus Station area of Tel Aviv. What stands out mostly about this area is the population, which consists mostly of immigrants and foreign workers. I love walking around the neighborhood, especially on weekends, visiting the markets and stores and feeling like a tourist in my own country. Not speaking the language, it's almost like being abroad. It's a situation that enables me to be "in it" and at the same time look "at it" from the outside.  It’s difficult for me to say how a different living environment would affect my work. I assume I’m affected by the surroundings I live and work in as everyone else is, especially when quite a lot of the raw material I use comes from it. 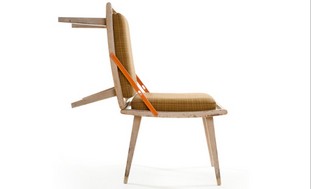 Tell me about your process, what is your typical working method? Do you sketch things out by hand or head straight to the computer? The first step is finding junk, an old object or item, which is my raw material. I must have the item in front of me in order to find the idea for it; I don’t start from the idea, but from the material. I look at it and ask myself – what can it be next, now that it has finished its primary role? What can I turn it into? Sometimes I know as soon as I see the junk and sometimes it can sit in the studio for months or even years before the idea comes to me.I sketch by hand or on the computer, depending on what is needed (esthetic planning, calculation of forces etc.), and sometimes I just go straight for the tools. 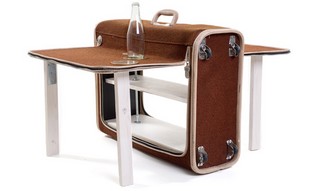 Do you remember your very first commission? I hardly work with commissions. I work in accordance with the material I find; therefore most of the items are one-of-a-kind. I do, however, remember the first lady who called me and bought something, and the item she had purchased. At that time I still worked in a small basement in the Central Bus Station area.I know it’s probably hard to pick, but do you have a favorite piece?I think the only items I feel completely self-contained with and have no criticism towards are candlesticks made out of old bicycle horns I bought in Tbilisi's flea market. 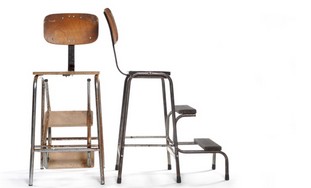 What are some of your methods for staying motivated, focused, and expressive?
I’m not sure I have any specific methods. I do my best to engage myself with the fun part of the work process: Working in the studio on new ideas. I also try to stop every now and then to check if I still enjoy what I do, that I don’t get carried away by all the "doing" without noticing it. I am also not scared by the thought or possibility that one day, at a certain point, the motivation and creativity will disappear. I know I’ll find something else to engage myself in, though I have no idea what that something might be.What are your sources of inspiration? Inspiration is a big word, too big for me. I’m not sure that the source of inspiration is external; it's hard for me to put my finger on it. I’m able to say that I need the junk and the raw material in order to get ideas. The ideas seem to stem from the material itself. 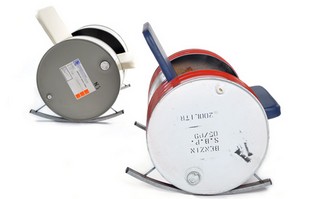 Do you listen to music whilst you work? What’s playing in your studio right now? I only listen to interviews and talkative programs, mostly "Reshet-Bet" [Israel Radio] and "Galei-Tsahal" [Army Radio].If you weren’t a designer, what would you be?I really have no idea, but I'm almost sure that something out there does exist and that if I have to, I'll find out what it is.What are you working on at the moment?A pair of benches from old wooden folding shades.Could you share with us your progression as an artist, compared to when you first started out, how have you changed since then? 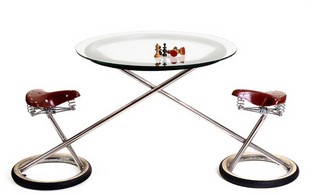 I constantly keep learning, even when I repeat the same action for the thousandth time – I still do it a little different than the last time and probably will do it differently the next time as well. Maybe the most important thing I have learned and still don't do well enough is to work slowly and be patient.What advice do you have for young designers who want to follow your path?I'm sure you can find a path that will be right just for you. Be patient, headstrong, and persistent.

What has been the biggest lesson you’ve learned since starting out?Always put on gloves before you start working.
Where do you see yourself within the next few years?You never know. Hopefully still getting up every morning and going (happily) to work in the studio.
Finally, tell us something no one knows about you.It is very hard for me to do interviews. On second thought, some people have already realized that.Read Einat’s blog and follow her designed journey at www.designbreakonline.com
Advertisement
Subscribe for our daily newsletter