Landscape architect Ram Eisenberg has successfully addressed the needs of a local Tel Aviv community with an innovative approach in Kiryat Sefer park.

By JPOST.COM STAFF
JUNE 26, 2013 19:13
Kiryat Sefer Park, Tel Aviv
(photo credit: Itai Palti)
Advertisement
Kiryat Sefer park has already been hailed as the triumph of a Tel Aviv community’s collective will. After 16 years of campaigning, the once derelict piece of public land is now a lively green oasis. As far back as 2000, the then mayor of Tel Aviv promised to set aside the land for a park, but progress was slow. However, the city council’s recent efforts set into motion a process of public consultations and investment, culminating in the opening of the park earlier this year. Now also, credit must be given to Landscape architect Ram Eisenberg who not only successfully addressed the needs of the community in his design process, but also wove them into a constellation of focal points with a singular message. The resulting landscape represents more than just people’s connection to nature, it also explores the nature of people. 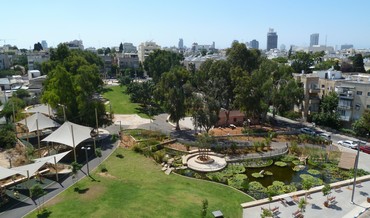 Kiryat Sefer Park from the Eastern end ( Itai Palti)Designing a natural space is in itself a paradox. Any human effort to recreate or arrange nature deems nature to be subservient to man. It is not that the effect or presence of man is unnatural, but rather man’s capability and tendency to devoid nature of its defining characteristics. This relationship has been continually articulated in different forms, and expressed with varying approaches.The two historically prominent strands of landscape design address the issue of nature’s subservience differently. The French formal garden, influenced by the Renaissance is based on symmetry and an emphasis on imposing order over nature. The arrangement of geometric patterns in plan highlight the authority of man by aligning a perspective of the garden to a specific point. The intended audience in the case of grand homes are the nobility viewing the gardens from within their chateau, reducing the chaos of nature to an image framed in glass. The competing school of thought emerged in the 18th Century and is known as the English landscape garden. The style which proposes a different idealization of nature was often inspired by paintings of landscapes by prominent European artists. The English landscape garden is suggestive of a greater acceptance of nature’s wild qualities. Its appearance not only indicates a different cultural ideal of beauty, but also the advent of a notion that claims to represent an aesthetic quality of nature beyond that of beauty; the "sublime." 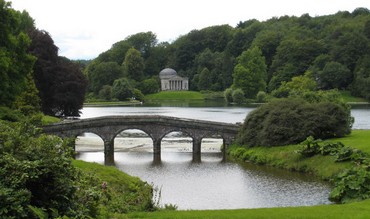 Stourhead, an example of the English Landscape Garden (Rod Allday - Wikicommons)It is in terms of experience that the English landscape garden challenged and affirmed the limitations of designed wilderness. It emphasized the cognitive aspects of experiencing the environment and attempted to relate to the sublime by drawing from the range of emotions that one might feel in the wilderness. The use of follies, buildings constructed as decoration, made use of one’s imagination as a tool for experiencing the landscape. Often follies borrowed from the imagery of fantasy and introduced an element of discovery. Follies are also an example of the limitations of such efforts, they invite imagination but also frustrate it. They are designed, and therefore only a simulation of discovering the unknown, or a hint of the unpredictability of nature. It is experience, too, which drives the design of Kiryat Sefer Park and differentiates it from other green public spaces. In composing a park that firstly fulfills its functional role, Eisenberg earned the liberty to explore the space as a destination, as an escape from the city, and as a catalyst for the contemplation of what nature means beyond landscaped soil and plants. Eisenberg explains that the practical side of the design process involved regular meetings with seven groups representing different desired functions for the new public space. A large part of his decision making involved accommodating as many of those practical functions. Judging by the park’s public reception, including that of the community which fought for its founding, the approach is an outstanding success.In its materiality, the design and execution is noteworthy, and the park is undoubtedly visually appealing. Through its confident appearance, the park manages to shift the focus away from the historic aesthetic preoccupation of landscaping and ascend the importance of a specific design agenda. There are two prominent words in Eisenberg’s description of the park, ‘nature’ and ‘well-being’. He believes that there are elements of nature that objectively produce the feeling of well-being. It becomes apparent with time that when Eisenberg speaks about nature, he isn’t always referring to flora and fauna, but rather to an experience: the feeling of the unknown, and of perpetual discovery. He states that “nature is any place or thing which manifests the forces of life and the elements’ constant play with one another.”It is these qualities that draw people to the wild, as the ultimate departure from the city’s relative safety and predictability. In Kiryat Sefer park, Eisenberg set about to provide the experience of wilderness, rather than attempting in vain to replicate it.The feeling of discovery is paramount in experiencing the park and there are many examples of how and why. In the lower end of the park, a large pond defines its Eastern boundary. The pond must be replenished every day to offset the water lost through evaporation. In most public gardens, this would be done through a pipe flowing straight into the pond, and at the most take the form of a feigned waterfall. In Kiryat Sefer park, the survival of the pond is a staged theatrical event. 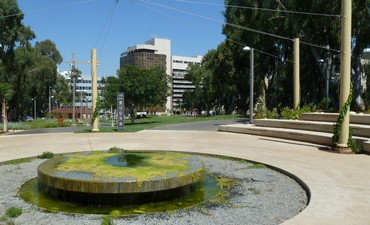 The fountain as the starting point for the daily water Every day at 5 p.m. a fountain at the other end of the park overflows, the excess water drains through the fountain’s base and emerges into the park creating a stream running through the landscape. It crosses the grass, and momentarily flows over a pathway into a series of purifying plant beds, before completing its course in the large pond. It is a purposefully short affair, and constitutes an event which integrates into the rhythm of the park. Parents bring their children at this time so that they can excitedly follow the water on its course and feel the rush of nature’s fleeting quality. 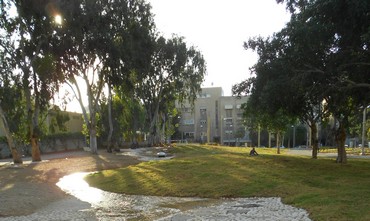 The Eisenberg explains the origins of another focal point. On a tour of the building site arranged for the local community one of the children asked if the space could be brought back to how it was. Intrigued by the question, the architect asked “For what reason?”, and the child responded: “because we used to be able to dig around and discover things here.” 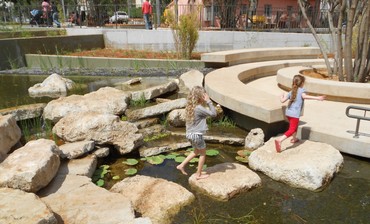 Children crossing the stepping stones (Ram Eisenberg)Eisenberg devised a solution. Within the sands of the play area were hidden 5,000 colored concrete blocks made by the children and adults of the local community, under the guidance of artist Yoav Weiss. Each “treasure block” contains a unique object, an “artificial fossil.” The children now dig the blocks out of the sand, and either take them home as a prized object, or bury them again. 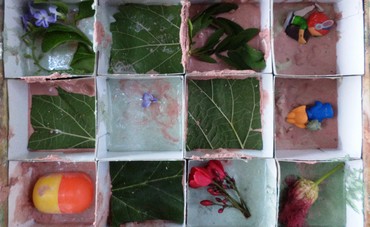 Treasure blocks in the making (Avital Vartikovsky) In the area where the water flows once a day, old optical lenses have been embedded into the ground, some covering objects out of reach. In time, the water will wear away some of the ground and unfasten or uncover the lenses, so that visitors will have reason to explore as the park evolves in the long-term too. A herb garden occupies another corner of the park. In the evenings, locals come with flasks of hot water and concoct a herbal tea to enjoy on a park bench with their friends. The emphasis on interactivity therefore extends into the adult world.At the request of the community for a place to hold meetings, a large custom made table occupies a picnic area. The table, Eisenberg points out, is intentionally located in proximity to the path as opposed to further out where there might be more privacy. The motive is to invite passers by to participate in discussions taking place. The encouragement of these activities is at once an acknowledgement and a celebration of the possibilities (and also limitations) of man to recapture the characteristics of nature through design.What the park provides is far more than a green setting for the playing out of daily life. It is a complex layering of architectural programs that actively encourages exploration. The park surprises the visitor with moments of discovery, and addresses that very specific desire of humans to venture into the unknown and come back with something tangible, or intangible to keep. Eisenberg has successfully crafted a green space that is more about the nature of people than nature itself.Itai Palti is a British/Israeli architect currently living in Tel Aviv, Israel.
www.itaipalti.com
www.facebook.com/itaipalti.studio