By BARRY DAVIS
SEPTEMBER 8, 2010 16:58
Advertisement
Most people would agree that there’s nothing like a good story. Even in this digitized, here-and-now, sterile-communication, instant-gratification global village of ours, a good tale – or even just an amusing anecdote, related in an immediate, personal and totally analog manner – is generally appreciated.That this is so is borne out by the continuing success of the annual Storytelling Festival, which will take place for the 17th year at Givatayim Theater between September 23 and 30.The festival roster is impressive and expansive, and perennial artistic director Yossi Alfi has drawn on eclectic cultural and geographical baggage.For a start, there’s British unofficial storyteller laureate Taffy Thomas; while, at the other end of the cultural spectrum, there will be a rare appearance in the Western world by an Iraqi artist, singer Ismail Fadel.Elsewhere in the imports section of the festival agenda there is acclaimed Canadian raconteur Dan Yashinsky, who founded the Toronto Festival of Storytelling in 1979 and cofounded the Storytellers School of Toronto. Everywhere you look in the program, there are at least half a dozen items that should appeal to almost all tastes.There is also a significant home-based contingent among the festival guests, including veteran media personality and comic Rivka Michaeli, former president Yitzhak Navon, former chief rabbi Yisrael Meir Lau, children’s TV show host Hanni Nahmias, former Knesset speaker Avrum Burg, and Greek music radio and TV show presenter Shimon Parnass – to mention but a few.The public will also receive some insight into the world of politics, the army and the world of crime by some highly qualified speakers with practical experience in those fields.One of the standout speakers at the festival – in the literal, vertical sense, too – is iconic former Maccabi Tel Aviv basketball star Aulcie Perry. Now 60, the Newark, New Jersey-born Perry will tell the festival audience about some of the things he experienced during the course of his conversion to Judaism over 30 years ago, and what spawned the decision.“Yossi called me at just the right time,” says the two-time basketball European Cup winner. “I’ve had a tough couple of years, and I was just starting to get everything together to start telling my story to the public. I think it’s time I told it.“Nobody really knows about me. I came here and I was an instant success, and people only heard about that side of things, about Maccabi and how well we were doing.”A couple of years ago, Perry underwent a tricky operation to replace his aorta, developing complications a year later which almost killed him. Thankfully, he is now well on the road to recovery and able to run his regular Basketball for Stars summer basketball camp for kids at the Wingate Sports Institute, together with his pal and fellow former Maccabi star Greg Cornelius. He also works with Maccabi’s youth teams. 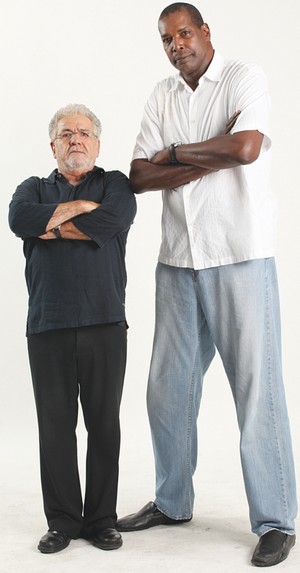 By all accounts, Perry has had a helluva roller-coaster ride in his six decades thus far on this planet, racking up amazing sporting achievements, and not a little personal grief. He grew up in a tough neighborhood of Newark and says it was often a battle for survival.“My primary school was nearby, so that wasn’t a problem. But when I went to high school, which was further away, I had to find a different route home every day, to avoid getting harassed. That was a very racially charged time in America, in the Fifties, and there was a lot of discrimination against blacks back then.”Luckily, however, Perry grew and grew – “I was two meters tall by the time I was 13 and a half,” he says – and there were some top-class sports facilities right across the road from his home where he could hone his basketball skills.A less-than-successful college basketball career was followed by a brief professional runout. But by 1975, Perry was not getting any NBA playing time from his New York Knicks employers, and he began looking abroad for employment. He was spotted by a Maccabi Tel Aviv scout shooting baskets on a park court in Harlem – and the rest, as they say, is history.A year after Perry began playing at the Yad Eliahu stadium, Maccabi won its historic first European Cup with the 2.10-meter-tall center playing alongside some of the legendary figures of Israeli basketball folklore, including Mickey Berkovitch, Motti Aroesti and captain Tal Brody.“We won the European Cup again in 1981; but, on reflection, I think that 1977 team was the best one I ever played in. We were like family – and still are.”In 1978, Perry converted to Judaism in doublequick time.“Everything felt right,” he recalls. “I felt completely at home as soon as I landed in Israel. People normally go to one or two classes a week to learn about Judaism when they convert. I went five times a week. I was like a sponge, I couldn’t get enough of it.”But it wasn’t all roses. “I come from a devout Baptist family, and my parents could not accept my conversion.”Perry’s father eventually came to Israel to see his son play for Maccabi, but his mother was afraid of flying, so she never got any of that nachas firsthand.“My mother still hasn’t accepted the fact that I’m Jewish, but she’s happy if I’m happy,” says Perry.However, over time, the cracks started to show through the façade of the sporting success.“I guess I had a lot of anger inside me, which I had never released. There was all that racial discrimination – and things haven’t improved that much, in that respect, in the States – and other stuff. I’m now starting to deal with rage.”In 1982, Perry missed a European Cup game. The official statement was that he had flu, but he had developed a drug problem. In 1983 he was found guilty of buying heroin, and a couple of years later, he was caught smuggling heroin from Amsterdam to New York. In 1987 he was sentenced to 10 years in jail. He served five years, and now says he is grateful for getting caught.“I am definitely thankful that happened. So I could mend my ways and sort myself out.” Perry has a wealth of entertaining and very moving stories to tell, including how he came to be circumcised at eight days old, African American origin notwithstanding.“I don’t know if I can use the world ‘destiny.’ I was told by a rabbi that there is no such thing in Judaism, but things always seem to happen at the right time. I think I’ll ask [fellow Storytelling Festival guest] Rabbi Lau about that,” Perry says.There will be a plethora of other activities available during the eight-day festival including the first professional storytellers conference, with Thomas and Yashinsky sharing some of their many years of professional experience with the public. There will also be plenty of free activities available in the Givatayim Theater forecourt.For more information about the Storytelling Festival: www.yossi-alfi.co.il. For ticket bookings: (03) 604-5000 or *8965.
Advertisement
Subscribe for our daily newsletter