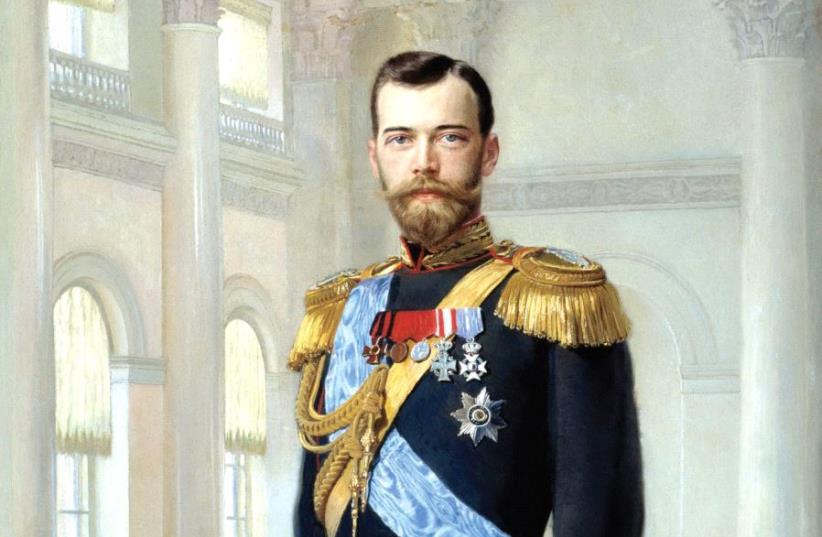 Last tsar of Russia, Nicholas II
(photo credit: EARNEST LIPGART)
Advertisement
The tale of Nicholas and Alexandra has been romanticized in film and verse, demythologized by academics in numerous books and promoted by Vladimir Putin as a means of fortifying Russian nationalism in the public arena.A hundred years later, the murder of the Romanov family in a cellar in Ekaterinberg in July 1918 still holds its fascination.Robert Service is an Oxford don who has written fine biographies of Lenin, Trotsky and Stalin. His new work, The Last of the Tsars: Nicholas II and the Russian Revolution, lives up to previous high standards. It covers the last year of the tsar – from his abdication in the wake of the February revolution until his execution by the Urals Bolsheviks.
Read More...
Service describes Nicholas II as “modest, inadequate and rigid.” His children’s English tutor, Sydney Gibbes, later characterized him as someone who abhorred “all kinds of pretense and insincerity.”As a boy, Nicholas was tutored by Konstantin Pobedonostsev, an antisemite who regarded Jews as parasitic on the Russian body and advocated the infamous May Laws of 1882 – which led to both pogroms and the first aliya. Nicholas subsequently held the Jews responsible for the 1905 revolution and portrayed them as a pernicious, alien influence, eating away at the purity of the Russian motherland.In captivity in deteriorating conditions, Nicholas’s reflections on his fate brought no contrition, no self-examination, no understanding of the Jewish masses.His reading material included not only Conan Doyle’s The Hound of the Baskervilles, but also A.N. Kuropatkin’s Russia for the Russians – in which Jewish conspiracies abound. He also found time for the works of Sergei Nilus, an enthusiastic endorser of The Protocols of the Elders of Zion.Nicholas understandably read books such as Dumas’s The Count of Monte Cristo in which the hero, Edmond Dantès, escapes from his island imprisonment. Another favorite were the stories of the Scarlet Pimpernel of Baroness Orczy whereby Sir Percy Blakeney rescued “innocent, heroic aristocrats” from the guillotine during the French Revolution. Yet as the author recalls, Orczy was a Hungarian conservative who described Jews as “dirty, sniveling, scheming and untrustworthy.”In November 1917, Nicholas sent a list of notable revolutionaries to his sister Xenia. In brackets after each name was the subject’s original Jewish name. Stalin did exactly the same some 30 years later in his campaign against Soviet Jewry. Lenin mysteriously became a Jew named “Tsederblyum” – probably due to Nicholas’s confusion with the Menshevik Julius Martov, whose grandfather was the wellknown Zionist Alexander Tsederbaum.The British were originally willing to rescue Nicholas and his family – a cruiser would pick them up from Murmansk.George V would place Balmoral Castle as their disposal. But when the Petrograd Soviet caught wind of this proposal, it vehemently opposed the exile of “Nicholas the Bloody.” The former tsar, it was argued, would have access to influence and funds in London and seek to overthrow the revolution.The British subsequently withdrew the offer and hinted that any proposal was conditional on Russia remaining in the war against the kaiser’s Germany. Nicholas was highly unpopular in England and no doubt King George was worried his presence would encourage republican sympathies.Meanwhile Bolshevik rule was rapidly decaying into sectarian chaos in Ekaterinburg.The Social-Revolutionaries had attempted to stage an uprising because they disagreed with the notion of a separate peace with Germany. The Anarchists had their own military force and flew a black flag over their headquarters. A force of 500 sailors was brought in from Kronstadt to provide stability, but instead promptly seized a vodka distillery and its contents.Unlike previous accounts, Service implicates Lenin and Sverdlov in the murder of the Romanovs. The local Bolsheviks refused to perform the killings unless they had heard from Moscow. With the Czechoslovak Legion, allied to the counter- revolutionaries, approaching Ekaterinburg, there was a real possibility Nicholas could be freed. Should the Romanovs therefore be evacuated or executed? Lenin and Sverdlov discussed the situation and then asked A.I. Akimov to send a telegram to the local Bolsheviks. Akimov pulled out his revolver when the post office clerk refused to hand over the copy and tape of the telegram. Its contents have been lost to history.Service clearly believes that while the evidence for Lenin’s complicity is slender, his enthusiasm for violence in 1918 provides the ingredient of ruthlessness to kill not only the hapless tsar, but also his young children, doctor and retainers.The author points out that even the hardened firing squad of devout Bolsheviks were sickened by the aftermath of their actions.Service has expertly documented every twist and turn of this saga. This is a story in which both the general reader and the involved specialist already know the tragic ending. Yet Service chronicles this journey from the heights of privilege and power to the depths of a primitive execution cellar with a fresh pen. In these uncertain times, such a fall from grace is certainly food for thought.

■ Colin Shindler is an emeritus professor at SOAS, University of London. His latest book, The Hebrew Republic: Israel’s Return to History, was just published by Rowman and Littlefield.