Brewing a solution to Passover’s restrictions

‘People love the concept of drinking beer on Passover, and they love our beer.’ 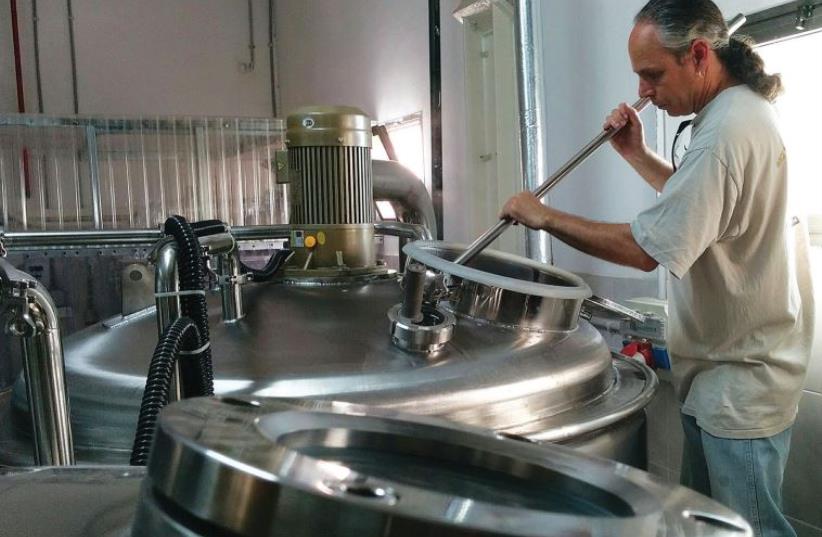 Bryan Meadan, the owner and brewmaster of Meadan Craft Brewing
(photo credit: DANNA MEADAN)
Is that the footsteps of the Messiah we hear? Ever since Jews have refrained from eating leavened grain on Passover, they have been suffering without beer for the entire seven-day holiday. Modern food technology has created Passover substitutes for almost everything else: rolls, pastries, noodles, even pizza! But beer has remained the forbidden fruit.That is, until this very Passover. Now, Meadan Craft Brewing in Karmiel, a microbrewery specializing in gluten-free beer, has brewed Israel’s (and maybe the world’s) first certified kosher-for-Passover beer.“We are doing our distribution now,” says Bryan Meadan, the owner and brewmaster of Meadan Craft Brewing, “and we hope to be in as many stores as possible before Passover. During Passover, we should be the only beer on the shelves!” Meadan’s beer is kosher for Passover because the fermentation comes not from grain, as it does in almost all other beers, but from date syrup, or silan. The other ingredients, which are the same as in all beers – water, yeast and hops – are not intrinsically forbidden during Passover.
Read More...
“However,” Meadan adds, “the rabbis insisted that the yeast be fresh and not be taken from any previously brewed beer. This was not a problem. They also didn’t really know what hops were, and we had to show them that these are actually little flowers, or seed cones, with no relation to grain. At any rate, all the hops we used were imported from the United States, and they already had kosher- for-Passover certification.”The other thing Meadan had to do was ensure that leavened grain was never used in his brewing facility. “This was not possible while we were doing contract brewing in someone else’s facility,” he explains. “But we were able to find investors and open up our own brewery here in Karmiel around six months ago.Since we have to keep our brewery stringently gluten-free, it is also in effect kosher for Passover year round.”Meadan’s Date Ale is certified kosher for Passover by the Chief Rabbinate of Karmiel and the Badatz Beit Yosef.Without getting overly technical, in regular beers, the sugars which are digested by the yeast to produce carbon dioxide and alcohol, come from malted grain, in most instances wheat or barley. In Meadan’s kosher-for-Passover ale, the yeast feed on silan and added brown sugar.For the yeast, the results are the same: carbon dioxide and alcohol.But for the taste, I missed the malty character that I associate with beer. In fact, many beer drinkers appreciate the balance between the sweetness of the malt and the bitterness of the hops which defines most beers. With Meadan’s Date Ale, this complexity is missing.Still, the Date Ale is a historic response for those who dread the thought of going through another Passover without beer.Meadan’s Date Ale pours out a dark copper color with a frothy head. The aroma is slightly spicy hops, wet grass and dried dates. With the first swallow, you get a dark bitterness against a slight background of chocolate. The body is very light and the aftertaste is not “hoppy.”In addition to the Date Ale, Meadan brews two other gluten-free beers yearround: a buckwheat beer and a hummus (chickpea) beer.“These beers could also have received a kosher-for-Passover certificate,” says Meadan. “But because buckwheat and hummus are considered legumes, they would be forbidden to those who do not eat legumes during Passover – that is, almost all of the Ashkenazi communities.“By brewing a beer based on silan, we avoided the fractious problems of kitniyot [Hebrew for legumes] altogether,” explains Meadan.Meadan Craft Brewing produced around 15,000 liters of the Passover Date Ale, a quantity which Meadan doesn’t think will be enough to meet the heavy demand.“People love the concept of drinking beer on Passover, and they love our beer,” he says. “By next year, we hope to expand our brewing facilities to meet the demands of the local market, and even to be able to export our beer.”But for this year, let Israeli beer lovers not quibble over nuances of aroma and taste. We have a Passover beverage that will quench your thirst as only a beer can. Enjoy it at your Seder and all the days of the Feast of Liberation.  Doug Greener is the owner of MediawiSe, an agency for advertising and direct marketing in Jerusalem. He writes a web log on Israeli craft beers at www.IsraelBrewsAnd- Views.blogspot.co.il
Cancel Subscription