Liberman: Ties between Israel, Arab states 'more crucial for them than us'

In special Independence Day interview, Defense Minister Avigdor Liberman talks about the region’s threats and the chances of a new war erupting this summer 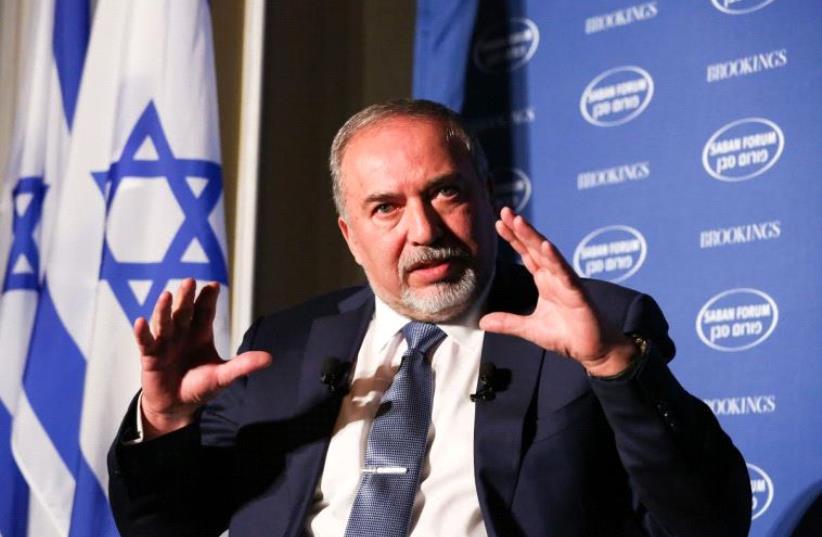 Avigdor Liberman speaks at the Saban Forum
(photo credit: SABAN FORUM)
Advertisement
Almost a year into his role, Defense Minister Avigdor Liberman seems to have adjusted to the position. Leaning back in his chair in his office in the Defense Ministry in Tel Aviv, the once brash hard-liner who heads the nationalist Yisrael Beytenu party seemed relaxed as he sipped his coffee.His appointment as defense minister last May was greeted by criticism from across the political spectrum; a poll broadcast on Channel 2 at the time showed that only 27% of Israelis considered him suitable for the role, while 51% favored his predecessor Moshe (Bogie) Ya’alon.

Some voiced concern that he lacked the experience to take charge of the IDF despite his 20 years of government service including stints as director general of the Prime Minister’s Office, chairman of the Knesset’s Foreign Affairs and Defense Committee and as a minister in four ministries including the Foreign Ministry and the Strategic Affairs Ministry. They pointed to the short military service Liberman did in 1982 after he immigrated to Israel from Moldova.Other critics expressed concern with Liberman’s hawkish and controversial policies vis-à-vis the Palestinians and Israeli Arabs. Throughout his career, Liberman has been one of the country’s more controversial and polarizing politicians, famous for making inflammatory statements. During the 2015 elections, while serving as foreign minister, he reportedly said of disloyal Israeli Arabs: “Those who are with us deserve everything. But those who are against us, there is nothing we can do, we need to take an axe and chop off their heads – otherwise we will not survive here.”BUT THAT was Liberman before last May. Since taking office, he has toned down his rhetoric and has turned into one of the more pragmatic and moderate voices in the current government. In many circles he is being spoken of as the government’s “responsible adult.” While some members of the coalition came out recently in favor of annexing West Bank settlements, Liberman rejected the notion and voiced support for a two-state solution. He also recently approved a long list of Palestinian construction projects in Area C of the West Bank, traditionally off limits to Palestinians.Another example was at the Munich Security Conference in February where he called for working with Sunni Arab states to defeat radicalism in the region and called on them to help solve the Israel-Palestinian conflict. According to Liberman, two states with population exchanges was the only solution.In an exclusive interview with The Jerusalem Post Magazine, Liberman said that the Arab Peace Initiative approved by the Arab League in 2002 has “some good points and some very bad points, such as the ‘right of return,’ which we will never accept.”“With all due respect,” he continued.“I don’t see any other country in the Middle East where they [the Arab League members] have succeeded in bringing peace.”“We don’t have any illusions, but we are open to dialogue with Arab states. It’s more crucial for them than it is for us.” 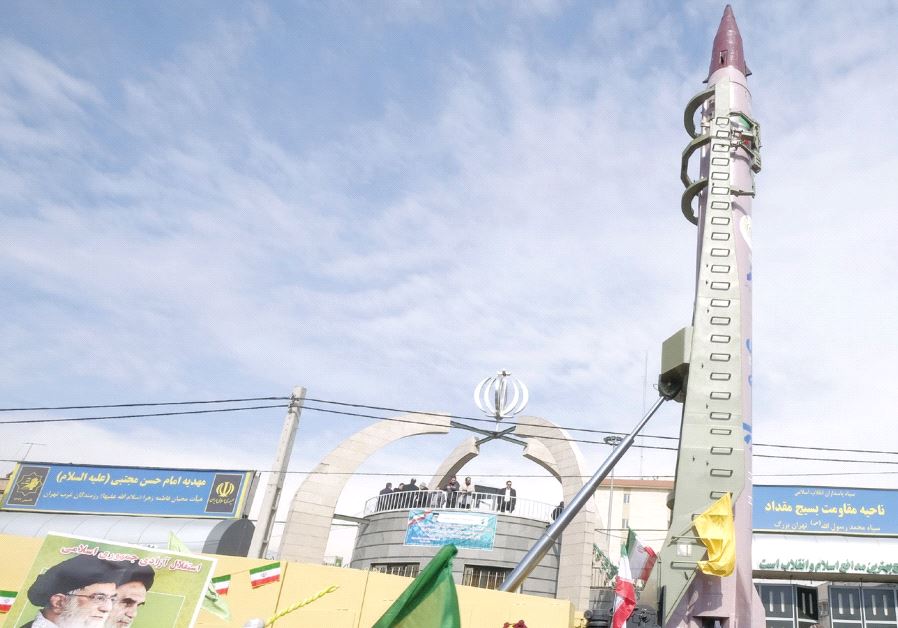 Iranian-made Emad missile is displayed during a ceremony marking the 37th anniversary of the Islamic Revolution, in Tehran last year (Reuters)According to Liberman, the Arab Sunni states understand that the biggest threat for them is not Israel but Iran and Iranian proxies, pointing to Hezbollah in Lebanon, Islamic Jihad in Gaza and the Houthi militia in Yemen.“Iran is a big threat to the entire region, not just to Israel,” he said. “We are a strong country able to protect ourselves; maybe the others are not. Iran is trying to undermine many countries,” referring to Tehran’s regional expansion to countries such as Bahrain and Yemen.“We need to explain to our allies that Iran is the biggest threat in the region. I am surprised to see that there is [more of] an understanding in the world about this,” he said. “At the Munich Security Conference last month [in March], Iran was the biggest topic. Everyone spoke about Iran, not about the Palestinians. The speech by [Saudi Arabia’s Foreign Minister] Adel al-Jubeir was very interesting; it was the first time I saw a high-ranking Saudi official talking about this.”Liberman said that Israel has not seen more moderate behavior from Iran since the signing of the Joint Comprehensive Plan of Action; the opposite seems to be true. For example, a competition was organized in Tehran for the best Holocaust denial cartoon, offering a prize of $50,000. There has been continued development and testing of ballistic missiles in violation of UN Security Council Resolution 2231, and there have been parades in Tehran featuring those ballistic missiles with Hebrew inscriptions reading “Israel must be wiped out.” A State Department report recently identified Iran as the No. 1 state sponsor of terrorism in the world.According to Liberman, Iran is the biggest sponsor not only of world terrorism, but also of weapons smuggling. He told the Magazine that it is “very clear that terrorist organizations are unable to survive without Iran,” which despite its weak economy, continues to finance terrorist groups to the tune of $300 million a year or more.Due to the continuing arms embargo prohibiting states from exporting weapons to Iran, there is major asymmetry when comparing Iran to other countries in the region, such as the rich Gulf countries, yet Tehran’s arms industry produces numerous weapons that are ending up in the hands of Hezbollah in Lebanon and Houthi rebels in Yemen. A recent report by Conflict Armament Research, a UK-based organization, found that Iran has been increasing its support for the Houthis in Yemen, including supplying kamikaze drones, which the group has been crashing into targets such as the radar systems of Patriot missiles. According to Liberman, the endgame of Iran’s role in Yemen is to get to the Saudis, and therefore Israel needs to coordinate its activities with the Americans and other moderate Sunni states in the region.“The ball is in their court. They know that Israel is a very strong and reliable ally and it is in their interests to work with us. We are open to all kinds of dialogue with all moderate states,” Liberman said.The current US administration under President Donald Trump shares the same vision and concerns about Iran. There “is no doubt that they are ready to handle this challenge,” he said, adding that Defense Secretary James Mattis “has a great amount of experience in this region and understands its complexities.” 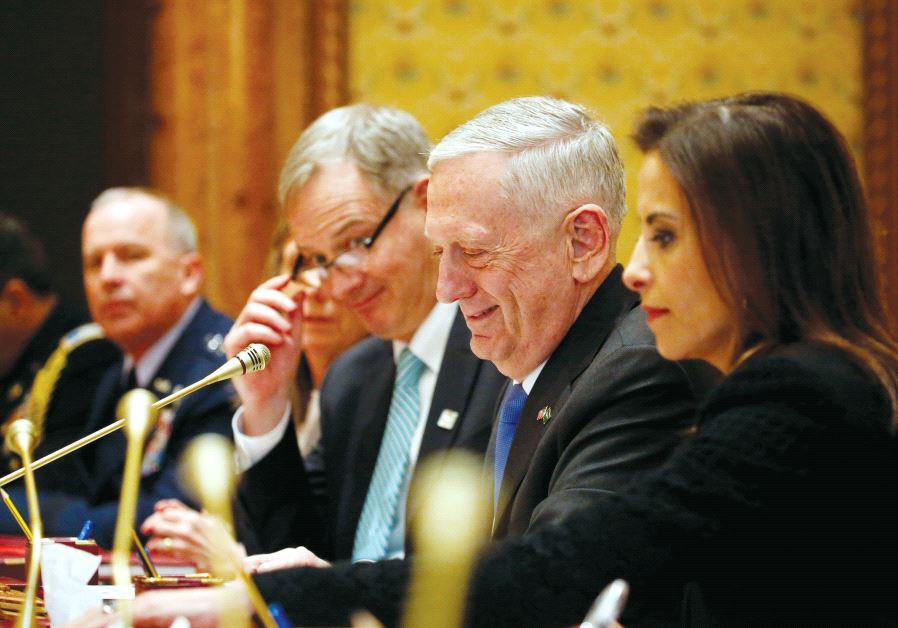 US Defense Secretary James Mattis (center), during his meeting with Saudi Arabia’s Deputy Crown Prince and Defense Minister Mohammed bin Salman (not pictured) in Saudi Arabia (Reuters)TURNING TO the threats posed by terrorist groups along Israel’s borders, Liberman said that Israel is coordinating with Egypt in the Sinai Peninsula. Israel, which has a 240-kilometer border with Sinai, has been closely cooperating in Sinai in the fight against ISIS militants since Egyptian President Abdel Fatah al-Sisi’s rise to power.Speaking to Army Radio in February, Liberman called Islamic State “annoying” and “hindersome,” describing them as “random [amateurs] who have decided to build themselves an army,” adding that “if you are talking about Hamas and Hezbollah then [Islamic State’s Sinai force] is not even a terrorist group.”Israel has “adopted a very clear policy regarding Hamas and Hezbollah,” Liberman told the Magazine. “We have no intention to launch any military operation on either border. We are acting under strict conditions: if someone fires a missile at our territory we will respond in very tough way, and if we see any attempt to smuggle weapons and any other attack planning activities, we will respond.”Weapons smuggling into the Hamas-run Gaza enclave from Sinai has decreased since the group began working on improving ties with Egypt, but in the last few months there has been gunfire targeting IDF troops along the border. Several rockets have been launched at Israel from Gaza, claimed by small jihadist groups, as well as several from Sinai, fired by Islamic State militants. Nevertheless, Israel holds Hamas responsible for all rocket fire coming from the Strip.“It’s not our business to look for every small Salafi group in Gaza. We have only one address. The launching of rockets by Salafi groups is the responsibility of Hamas. They say every day that they are the authority and they are the rulers of the Gaza Strip. If you take responsibility then you pay the price,” Liberman said.No Salafi group will overpower Hamas, Liberman added.“Islamic State is getting closer to being suffocated in Raqqa and Mosul, and I don’t see additional support forthcoming for these groups in Gaza, Lebanon or Syria.”Regarding Syria, he said that while Israel does not want to interfere in the war-torn country, it will continue to prevent the smuggling of weapons to Iranian-backed Hezbollah. “We are trying to protect our security interests.”With Israel admitting to carrying out air strikes against weapons convoys heading to Hezbollah, Russia and Israel have implemented a system over Syria to coordinate their actions in order to avoid accidental clashes. Officials have met several times in the past year to keep the mechanism working, but according to Liberman, there is no “cooperation” with the Russians in Syria, only “consultations.”Calling Syria an “artificial country,” Liberman said that “the Shi’a tried to impose an artificial solution and maintain it. That’s mission impossible! It is crucial for the government to represent the total mosaic of the country.”Despite Bashar Assad being “none of our business, he has no ability to bring stability to Syria. He as well as Iran and their militias will have to leave Syria,” Liberman said. “Stability in Syria requires the removal of Assad and free and fair elections for the Syrian people.”WITH THE summer coming, there are some predictions that the already volatile situation in the Gaza Strip and along the northern border will erupt into another war with Hamas and Hezbollah. Chuckling when asked if and when a war might break out, Liberman said he doesn’t see one in the near future.“It’s not about us and Gaza; the entire region is complicated and explosive. We are the only country that is in good shape. On our southern borders we have ISIS, Hamas and Islamic Jihad. It’s a complicated region. Despite that, we still succeed in keeping ourselves stable and safe,” he said with a smile.“We try to avoid war because no one wants a war, but sometimes even despite our best intentions and desires there can be accidents that can lead to a war,” Liberman said, ending with one final warning: “If someone wants to impose a war on us, it will be a completely different war than they have ever seen before.”