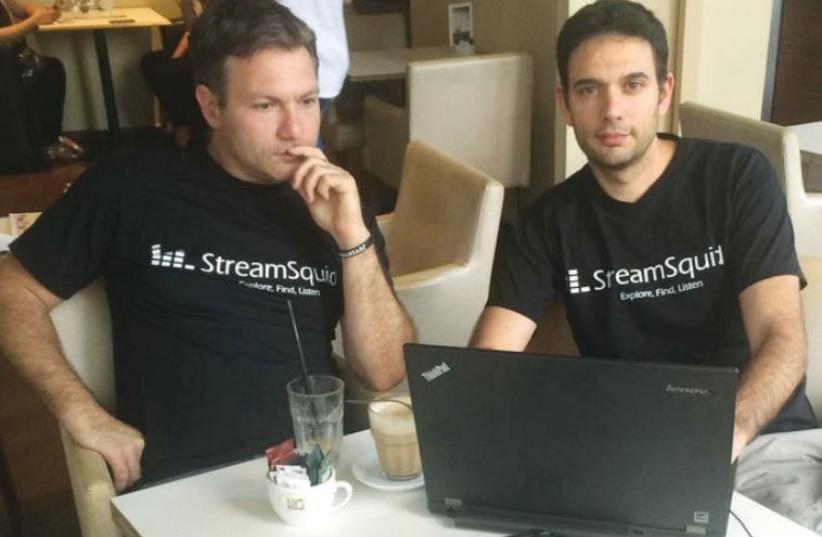 Streamsquid's Ziv Waksman and Itzik Ben-Basat meet at a cafe to code.
(photo credit: Courtesy)
Advertisement
Music fans the world over cringed at the recent demise of Grooveshark – a free music streaming service – mainly because years of collected music and fine-tuned playlists suddenly disappeared.But four Israeli guys – programmers and startup consultants by profession – say their side project, a legal music- streaming service, can save the day for music fans everywhere.StreamSquid is a digital music service that gives you access to millions of songs. It also allows you to restore your Grooveshark playlists in one click.
Read More...
“We are the first in the world to solve the problem and get the playlists back,” Ofir Yosef, one-fourth of the StreamSquid team, tells ISRAEL21c.In a world already brimming with online music-streaming sites (and every so often associated legal battles), the launch of a new free digital music portal is usually greeted with skepticism.But Itzik Ben-Basat, a self-described music fanatic who works as an engineer by day, came up with the idea for StreamSquid about a year ago to include contemporary Israeli music hits in his online playlists alongside global beats.The site was open to the public from the moment he coded it in mid-2014.In April of this year, Ben-Basat and his three partners – Yosef, as startup consultant, and fellow coders Ziv Waksman and Yoni Rom – opened a Facebook presence.The homepage of the site may not be beautiful but it makes music fans’ dreams come true. Most similar to Streamus, StreamSquid lets users turn YouTube and radio channels into music players without ads and without downloading.“StreamSquid is based on the YouTube API and SoundCloud API. We are legal,” 38-year-old founder Ben-Basat tells ISRAEL21c.“We make the connection between collections. We’re not giving you the ability to download but rather only the option to stream. It’s very important to us that there’s no gray line here. We let people explore music and keep their own playlists in a legal form. And there are over 100 million music videos available.”

100 million songs in your playlist StreamSquid users can choose to create a playlist, use their former Grooveshark lists, tune in to radio channels, the Top 100 Billboard hits, or theme collections like Summer Party or Best Covers.StreamSquid also gives an alternative to Spotify and Apple Music Radio, which are not available in Israel.The reason you’ve probably never heard of this company is because it’s never launched a media blitz or advertising campaign.“It started with a few lines of code,” Ben-Basat, of Haifa, says. “I used Grooveshark to stream music but I felt like I was missing Hebrew music. I thought, ‘Why not take Hebrew music and attach it to a streaming service?’ One or two months later, I showed it to Ofir and some guys at work.”“I was a huge fan from the first day. I can hit the play button and listen to music all day. Now I tell all my friends there’s a new place for Israeli music,” says Yosef, who was profiled by ISRAEL21c about social image-processing service PhotoMania (which he recently left). It was Yosef’s idea for StreamSquid to make its English-language media debut on ISRAEL21c.It didn’t take long for Ben-Basat’s best friends Waksman of Modi’in and Rom of Tel Aviv, to join him and Yosef in the venture.“We work by Skype or email, or we meet somewhere in the middle at a café after work to collaborate on this project,” Yosef and Ben-Basat, both working fulltime jobs elsewhere, explain in a joint phone conversation with ISRAEL21c.“We’re not looking for investments yet; we like it that we’re bootstrapped.”The guys say they’re first working on “additional features to the website” and will only then work on supplying a cross-platform app solution.“We do it for love, what we want to give to the world as music fans,” says Ben-Basat. “StreamSquid is about letting people have music. We are music fanatics, Grooveshark fans and programmers in that order.”The demise of Grooveshark had a noticeable effect on this little site, whose “About” section is still only in Hebrew.From some 6,000 local users who found it by word of mouth in Israel, the fateful court decision that closed down the American music pioneer rocketed up StreamSquid’s user base to more than double. So far, they’ve got users in Israel, the United States, Canada, France, Spain, New Zealand and Australia.“The original goal was to provide music to Israelis, both global and Israeli music,” says Yosef. “But after we saw what happened to Grooveshark, we saw it’s bigger than Israeli needs. We see that the international audience wants music they collected for years. It’s a solution for the people and not limited to the Israeli people.”

For more information, go to: http://streamsquid.com.Reprinted with permission from: http://www.israel21c.org/
Advertisement
PREMIUM Log Out
Subscribe for our daily newsletter