The Tisch: Erlau - A unique case of Hassidism

Erlau, it would appear, walks a fine line in remaining faithful to its heritage, yet aligning with Hassidism. 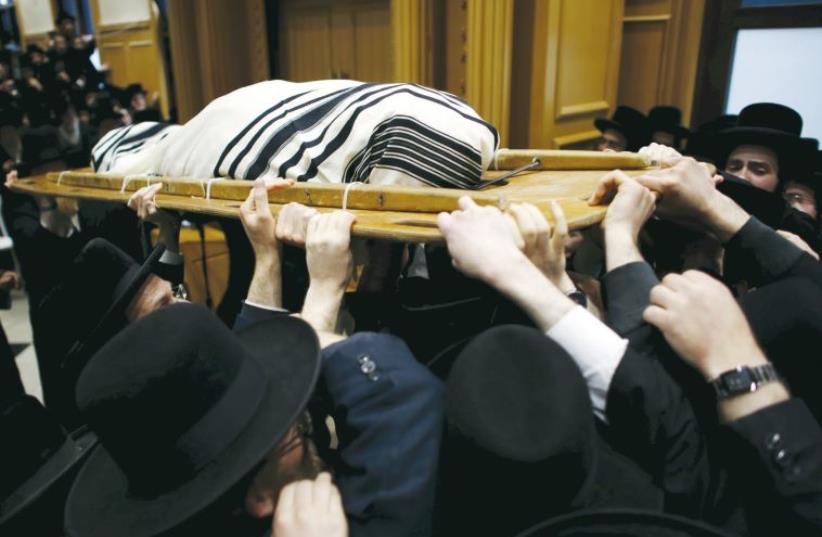 The rebbe of Erlau died Monday at the age of 92 in Jerusalem
(photo credit: REUTERS)
Most hassidic dynasties trace their roots back to 19th-century Europe, some even further back to the 18th century. There are, however, some dynasties that developed as late as the 20th century.Perhaps the latest addition to the pantheon of hassidic courts is Erlau. Rabbi Yohanan Sofer (1923-2016) was the person responsible for the establishment and development of the inimitable Erlau hassidic community.He was a direct descendant of Rabbi Moshe Sofer (1762-1839), more commonly known by the title of his works Hatam Sofer – was one of the leaders and fashioners of Orthodox Jewry in 19th-century Central Europe and is remembered for his battles against changes in Jewish practice.
Read More...
The Hatam Sofer served at the rabbi of Pressburg (today Bratislava, Slovakia).He was succeeded in that post by his son Rabbi Shmuel Binyamin Sofer (1815- 1871), author of a collection of responsa titled Ketav Sofer. One of the Ketav Sofer’s 10 children, Rabbi Shimon Sofer (the second, 1850-Auschwitz 1944) served as the rabbi of Erlau (today Eger, Hungary) from 1881. His responsa are titled Hitorerut Teshuva.As Rabbi Shimon Sofer aged, one his sons, Rabbi Moshe Sofer – the second – 1885-1944, took over some of the rabbinic duties of the town. The nonagenarian Rabbi Sofer was deported to Auschwitz in 1944, where he was murdered together with his family and community.None of the Sofer rabbis over successive generations were identified with the hassidic movement. In fact, the patriarch of the family – the Hatam Sofer – wrote against the notion of an organized pietistic community. In the eyes of the Hatam Sofer, pious practices that went beyond the framework of Jewish law were the province of the individual.ONE OF the Erlau Sofer grandchildren to survive – Rabbi Yohanan Sofer – began to resurrect the Sofer legacy in postwar Hungary, first in Budapest and later in Eger.Only in 1950 did Rabbi Yohanan, together with a group of students move to Jerusalem. At first they joined other scions of the Sofer family at the Pressburg Yeshiva in Jerusalem, but in 1953 Rabbi Yohanan and his students purchased rooms of the former Syrian Consulate in the Katamon neighborhood of Jerusalem, where they re-established the Erlau Yeshiva.It was at around this time that Rabbi Yohanan began to adopt hassidic customs, many foreign to the Sofer legacy. He reportedly went to the mikve each morning before prayers, he led his disciples in the hassidic-style tish (table), and male members of the community wore the shtreimel – the fur headwear favored by Hasidim.Politically, Erlau identifies with other small hassidic groups as part of the Shlomei Emunim faction of the Agudat Yisrael party in the Knesset.Yet hassidic practice has not been adopted wholesale by the Erlau community.For instance, members of the Erlau community do not wear the gartel (belt), worn by hassidim during prayer and at other times (to separate between the two halves of the body).While the Hatam Sofer might be uncomfortable with the notion that his descendant established a hassidic-style community, Rabbi Yohanan Sofer was certainly not an embarrassment to the illustrious Sofer family.Indeed, his loyalty to his roots is demonstrated by the printing press he heads which is named after his distinguished great-great-grandfather and seeks to publish works from the rabbis of successive Sofer generations. Erlau institutions are named after Sofer predecessors: Erlau primary schools carry the title of Rabbi Yohanan’s great-grandfather; the yeshiva is named after his grandfather, and Erlau synagogues around the world bear the title of his father.Erlau, it would appear, walks a fine line in remaining faithful to its heritage, yet aligning with Hassidism. This situation is exemplified by Erlau approach to the prayer rite. In Erlau’s Jerusalem center the Ashkenazi prayer rite is used, rather than the kabbalistically-influenced one preferred by other hassidic courts. On Friday nights individuals add the passage from the Zohar titled kegavna – a staple of the accepted hassidic prayer rite. This approach is in concert with the legacy of the Hatam Sofer: pietistic practices are the province of the individual. Yet Erlau communities elsewhere have adopted the hassidic prayer rite in toto.So is Erlau a hassidic dynasty or not? Erlau’s hassidic alignment is so new that it would be inaccurate to call it a “dynasty.”Hassidic customs abound in the community, and it would appear that Rabbi Yohanan Sofer was recognized as a hassidic master. Yet the Erlau community retains idiosyncratic features of its non-hassidic heritage. Certainly a unique case.  The writer is on the faculty of Pardes Institute of Jewish Studies and is a rabbi in Tzur Hadassah. He is currently a post-doctoral fellow with the Inter-University Academic Partnership in Russian and Eastern European Studies.
Cancel Subscription