Turkey at a crossroads: A look inside the night of the coup and its aftermath

Turkey finds rare unity in defeat of coup attempt a month ago, but dissidents worry about the future. 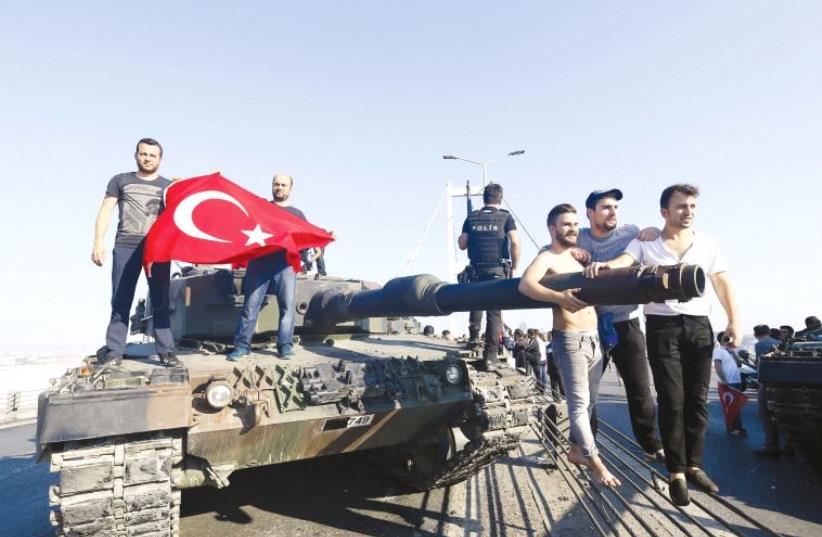 People pose near a tank after troops involved in the coup surrendered on the Bosporus Bridge in Istanbul on July 16
(photo credit: REUTERS)
Maj. Mehmet Karabekir was tired of the weakness he smelled in his colleagues. “No compromise, no hesitation,” he texted. “Hit them, crush them, burn them.” Just after midnight on July 16, he stood with a group of Turkish soldiers in Acibadem, a neighborhood in Istanbul.A small crowd had gathered to watch Karabekir and his soldiers as they were attempting to secure a building belonging to Turk Telecom. The civilians had heard a coup was under way. A man with a smartphone ducking in and out of the little crowd filmed as Mete Sertbas, a local mukhtar for the neighborhood, approached the soldiers. Words were exchanged and Karabekir raised his bulky G3A7 rifle. The man filming ducked behind someone and a single shot rang out. Karabekir shouted at the mukhtar, who stumbled backwards, keeled to one side and collapsed on his back, dying.

“Show no compassion,” the major texted his co-conspirators. “We are about to win…as someone who is in the field, I am firing, firing into the crowd and waiting.” Less than 12 hours later, in the midday haze of Istanbul, the major was dead and his comrades were being rounded up by police commandos and crowds of civilians. The Turkish coup was over.“Every coup that does not kill us makes us stronger,” Turkish Prime Minister Binali Yildirim told millions gathered in Istanbul at a “democracy and martyrs” rally on August 7. Almost a month after the failed coup in which 240 were killed, President Recep Tayyip Erdogan and his prime minister are riding a wave of support. It is being called a “second war of independence” for the country, with comparisons to a new era of nationalist strength harking back to the time of former general Mustafa Kemal Atatürk, founder of the Republic of Turkey. The country is awash in seas of red flags with the white crescent.“The world is looking at you now,” Erdogan told crowds. “Each and every one of you fought for freedom and democracy.”On hand were leaders of the main opposition, Kemal Kilicdaroglu of the Republican People’s Party (CHP) and Devlet Bahceli of the Nationalist Movement Party (MHP); a rare show of unity. Kilicdaroglu agreed that today there is a “new Turkey.” Absent from that new Turkey on Sunday was the mostly Kurdish opposition People’s Democracy Party.Elsewhere in Anatolia, more than 16,000 people were detained following the coup. In what has been called a “purge,” more than 21,000 teachers, 504 doctors, 300 employees of TRT and even sports referees have been suspended.On July 16, 2,754 judges were dismissed for alleged links to the coup, and 89 journalists have been charged.There isn’t a sector in society, including academics, that has not been affected by the roughly 70,000 suspensions and arrests. Erdogan has said he wants the death penalty brought back. Already an unmarked cemetery near a dog kennel has been earmarked. Among the first interred there was Karabekir, the killer of the mukhtar.The forces at work on both sides of the July coup attempt have deep roots in modern Turkish history. Founded by Atatürk in 1923, the secular republic has always had deep tensions between Kurds, Islamists and radicals on the Left and Right. Coups aimed at “reestablishing the nationally desired democratic regime” toppled governments in 1960, 1971 and 1980 and sought to influence governments through memorandums in 1993 and 1997 in the name of secularism.The 1980 coup led to 600,000 arrests and 50 executions.Erdogan, whose Justice and Development (AKP) party came to power in 2001, was at odds with this secular “deep state” tradition. He told a crowd in 1997 “the mosques are our barracks, the domes our helmets, the minarets our bayonets and the faithful our soldiers.” This poem was an obvious rejoinder to the military’s role in politics, in a sense saying to the generals: We also have an army. Between 2003 and 2011 Erdogan’s allies, among them men allied with an Islamist cleric Fethullah Gülen, claimed to have uncovered a plot named “Sledgehammer” and a secret group called Ergenekon in the military that sought to remove the AKP. Hundreds of military officers, some retired, were arrested. 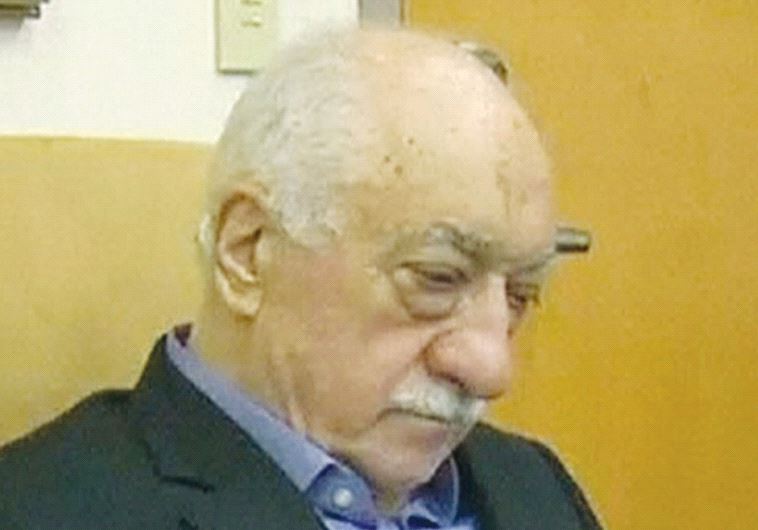 US-BASED CLERIC Fethullah Gülen (Reuters)Burak Bekdil, a Turkish columnist for Hurriyet Daily News argues that we have to understand the 2016 coup attempt against this background.“You must note that Erdogan and Gülen were best allies for several decades, until they broke up over methodology to reach a common goal… When the two camps [Erdogan and Gülen] fell apart, it became evident that the Gülenists are a small elite group within the state bureaucracy. They do not have any massive popular support.”Gülen was born in a small village in eastern Turkey in 1938 and established an Islamic movement that went on to found schools in more than 140 countries.In Turkey he told his followers in 1999 to “be more fruitful on behalf of Islam and carry out a nationwide restoration.”The government accused him in 2014 of running a “terrorist organization” and infiltrating more than 1,000 schools. US diplomatic cables published by Wikileaks claimed on December 30, 2004, that Gülenists had penetrated the state bureaucracy and in 2008 were embedded in police and intelligence units.A confidential US diplomatic cable from September 14, 2009, notes, “Our contacts all agree [that Gülenists] are everywhere in Turkish society, including the strongest bastion of Kemalism – the military.” The source told the Americans that the military leaders were worried about infiltration. They told of complex Gülenist conspiracies whereby the inwardly Islamist Gülenists would dress immodestly, encouraging their wives to wear bikinis, and pretend to drink alcohol, to confuse state institutions who sought to ferret them out.For Kurdish activists such as Kani Xulam, the founder of the American Kurdish Information Network, the lead-up to the coup attempt and the results have a deeper meaning as well.“The words of Erdogan definitely herald a new beginning in Turkey. Today he has put the Gülenists in the crosshairs of his vengeance. Tomorrow or sooner he will add the Kemalist [secular] Turks and recalcitrant Kurds.”Xulam argues that Erdogan sought to remake Turkey into a neo-Ottoman empire but had to control the army’s coup mentality to do so.“The Turkish Army, the largest in NATO after the United States, used to run the country, like the Bolsheviks of the Soviet Union, with an iron fist. Now, it is brittle and on the verge of a break up.” Erdogan’s conflict with the army and Gülen gave others a respite.“The Kurds, the Alevis and the leftists who suffered in its hands through successive coups are probably pinching themselves to make sure that what befell it is real.”Before the coup attempt, Erdogan seemed to be lurching from crisis to crisis. He had diplomatic spats with Israel and Egypt and became a leading supporter of the Syrian rebellion against Bashar Assad. 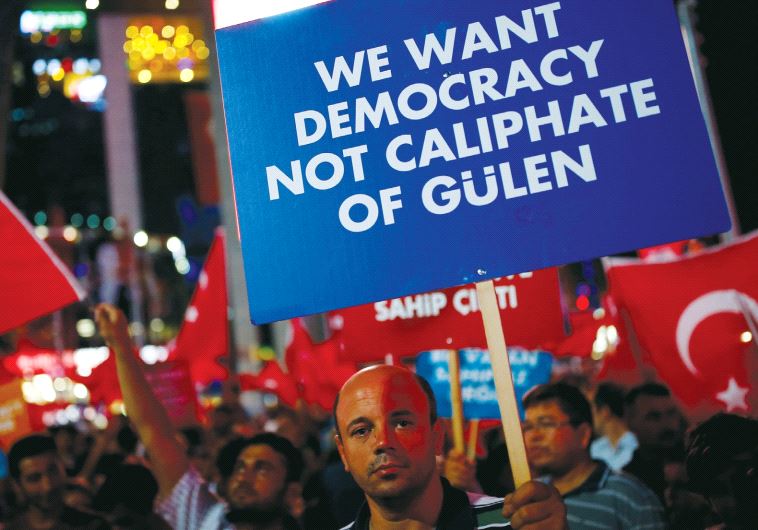 A MAN holds a banner proclaiming solidarity with the government on July 27 (Reuters)In November 2015 Turkey shot down a Russian Sukhoi Su- 24 fighter jet. After peace talks with the Kurds broke down, he launched a war against the Kurdistan Workers’ Party.Islamic State terrorists targeted Turkey in several attacks and tourism declined 40 percent. Erdogan concentrated power in the presidency, ditching his longtime ally and prime minister Ahmet Davutoglu in May in favor of Yildirim.So how did Erdogan, at the seeming height of his power in July 2016, almost become victim of a coup? The army had been neutered through waves of prosecutions relating to the Sledgehammer and Ergenekon trials. Xulam sees the coup as the work of a combination of factors.“There is no question that the Gülenists dislike Erdogan. They are also not beyond using Kemalist symbols for their own Islamic ends. But there were also a lot of disgruntled officers, as we now find out. The military, in spite of what happened in Turkey when Erdogan and Gülen clipped its wings, remains a bastion of Kemalist dogma. The officers disliked Erdogan telling them what to do. They resented the creeping Islamization of Atatürk’s republic.”Yasin Aktay, a leading member of the AKP, wrote on August 1 in Al-Jazeera that the hands behind the coup can be seen in the words of a Turkish judge named Ilhan Karagoz, who declared Gülen to be the “Mahdi” on July 4, a week and a half before the coup.“The Mahdi is the name given to a holy leader who, according to some Muslims, will be sent by God to guide humanity, calling them to follow Islam before the end of the world. Karagoz incorporated himself in this fiction by designating himself as the so-called harbinger of the Mahdi.”The judge ordered that Erdogan, “together with all cabinet and parliamentary members, hundreds of mayors, journalists and businessmen be taken into custody.”At 9:15 p.m. on July 15, Major Murat Celebioglu in Istanbul created a WhatsApp group named ‘Yurta Solh’ (Peace at Home), a term coined by Atatürk and used as a slogan in the Turkish armed forces. He began adding officers of the 3rd corps of the 1st army based in and around Istanbul.“You can provide important updates here; I’ll pass them on to Ankara,” he wrote at 9:15 p.m. in texts that were found after the coup and published on the Bellingcat website.The first act of the plotters in Istanbul was to block traffic entering Istanbul on the E5 and E80. By 9:29 p.m., the 6th Motorized Infantry and other units had been activated to block roads and take down communications targets. It was a Friday night, and the city was just getting ready for a night out.What we know now is that more than an hour earlier, 1st Army commander Umit Dundar had contacted Erdogan, who was on vacation in Marmaris and warned him that something was not right.“You are our legitimate president,” Dundar said. “I am at your side. There is a huge coup and the situation is out of control in Ankara. Come to Istanbul.” Erdogan also had other hints that something was amiss when his brother-in-law had called him earlier and told him of unusual military activity. 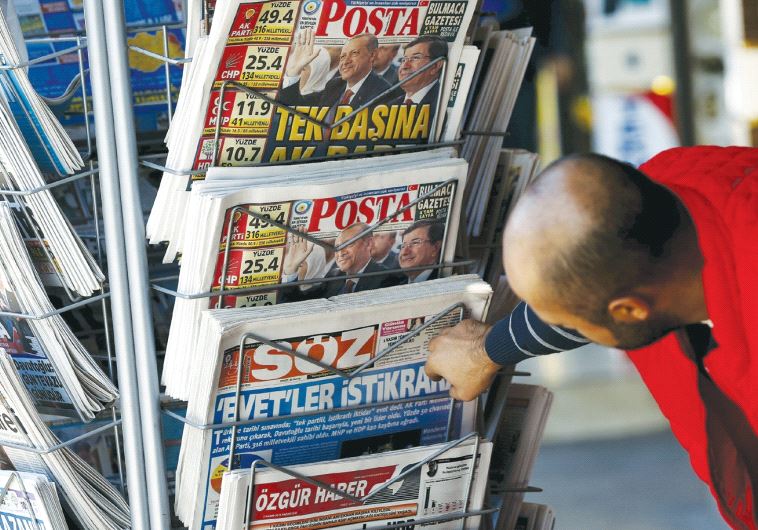