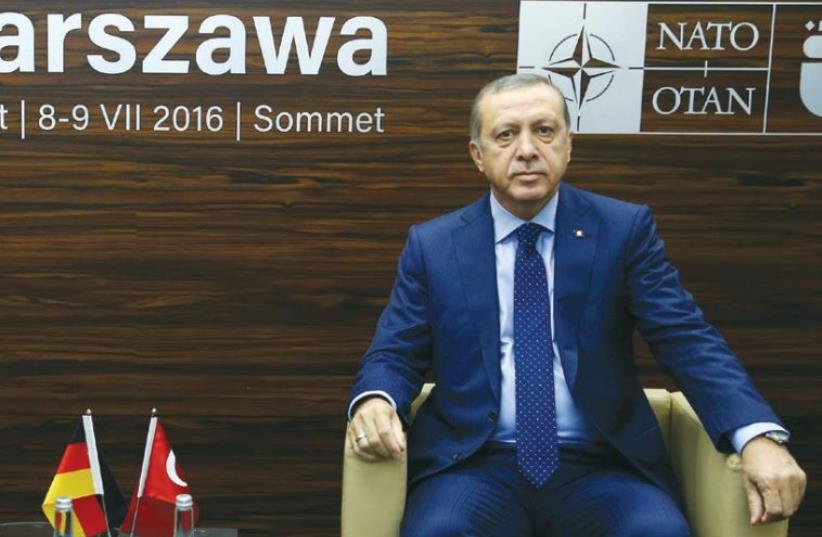 TURKISH PRESIDENT Tayyip Erdoga at the NATO summit in Warsaw last Saturday.
(photo credit: REUTERS)
Advertisement
Turkey’s recent foreign policy reversal “is one of the most significant events” since the Arab uprisings began in 2011, said Ege Seckin, senior analyst specializing on Turkey at IHS Jane’s Country Risk.President Recep Tayyip Erdogan’s ruling Islamist AK Party has been supporting Islamist forces across the region, such as the Muslim Brotherhood, Hamas, and rebel groups in Syria, but its failure to succeed in implementing its foreign policy led to a 180-degree turn toward a more realistic path.The failed coup over the weekend is unlikely to alter this shift, but could even accelerate it as Erdogan's weakened position at home could lead to more flexibility in foreign policy.On Wednesday, Prime Minister Binali Yildirim announced that Turkey seeks to repair relations with Iran allies Syria and Iraq.“It is our greatest and irrevocable goal: developing good relations with Syria and Iraq, and all our neighbors that surround the Mediterranean and the Black Sea,” Yildirim said, in comments broadcast live on television.“We normalized relations with Russia and Israel. I’m sure we will normalize relations with Syria as well. For the fight against terrorism to succeed stability needs to return to Syria and Iraq,” he said.Seckin, an Istanbul native, told The Jerusalem Post in an interview Thursday that some people think this is a trial balloon, “but I don’t.”“Turkey is currently facing defeat in the four-year long effort to topple Syrian President Bashar Assad,” he said, adding that it is clear to Turkey since Russia got involved that Assad is going nowhere.Seckin argued that if Turkey normalizes relations with the Syrian government it would be the most important policy shift since Erdogan, then prime minister, called for Assad’s departure in November 2011.Yildrim’s statement about Syria represents a concession of defeat and its effort at using Islamist proxies to carry out its goals there.“The siege on Aleppo could be the final blow for Turkish-backed groups that have some power in that area,” he said. “Turkey probably wants to preempt this defeat,” added Seckin.The shift to a more realistic foreign policy with countries in the region marks a departure from the strategy of former prime minister Ahmet Davutoglu. “Erdogan is aware that the foreign policy was deadlocked and unsustainable.”Seckin went on to assert that Erdogan is a pragmatist that is taking a series of moves which started with the Israel rapprochement and the apology to Russia for shooting down its jet.In addition, Turkey is also looking to repair ties with Egypt, where it had supported the Muslim Brotherhood against the government.Turkey has not taken any steps yet on normalizing relations with Egypt, but would like to restore ties, Deputy Prime Minister Numan Kurtulmus said on Monday.Seckin continued, “Erdogan is not doing it because he wants to, but he has no choice and he knows the domestic cost is limited.”An interesting sign was that the Turkish Humanitarian Relief Foundation (IHH), the same organization that was behind the Mavi Marmara flotilla that sought to break Israel’s blockade of the Gaza Strip in May 2010, came out against the deal with Israel.In response, the Turkish president slammed them hard, and IHH even later apologized for criticizing Turkish policy, noted Seckin.“This was a very important test” to see how his supporters would react after dramatically changing the country’s policy and anti-Zionist narrative it was putting out. “No one within Erdogan’s Islamist circle raised their voice and criticized the policy change,” he said.“The AKP ideology is no longer Islamist but Erdoganist,” he quipped adding that pragmatism overtook Islamism and as a result Erdogan has moved closer to the Turkish nationalist position.There are two objectives for the Turks in Syria, he continued. First, to topple Assad, and second, to prevent an autonomous continuous Kurdish entity from being created in northern Syria, since it would have implications for its own Kurdish insurgency.So in essence, Erdogan chose to focus on the Syrian Kurdish issue at the expense of the effort to topple Assad, he argued. “Assad and other regional states also do not want there to be an autonomous Kurdish entity in Syria.”Ariel Ben Solomon is a contributor to IHS Jane’s Intelligence Review. Reuters contributed to this report.