The release of the new notes was delayed "due to the circumstances of the war and exchange rate fluctuations." 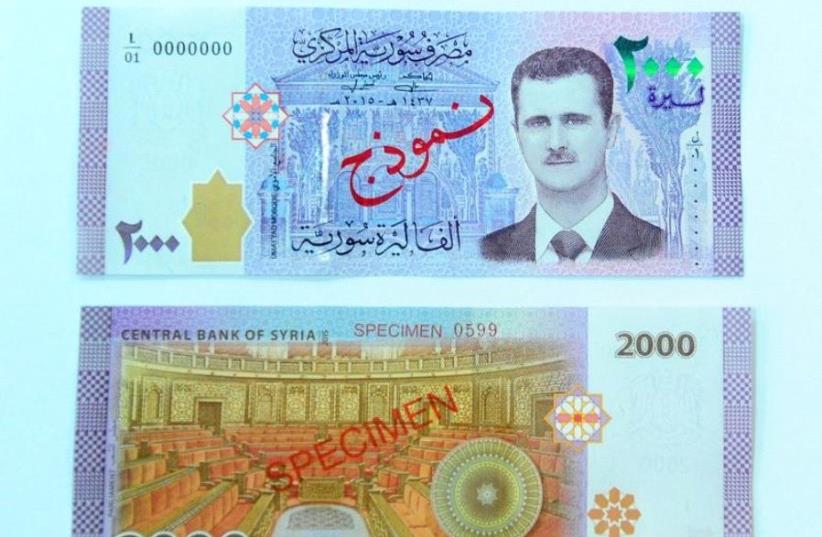 A portrait of Syria's President Bashar Assad is seen printed on the new Syrian 2,000-pound banknote that went into circulation on Sunday, in this handout picture provided by SANA on July 2, 2017, Syria.
(photo credit: REUTERS)
Advertisement
BEIRUT - President Bashar Assad has appeared on the Syrian currency for the first time, his portrait printed on a new 2,000-pound banknote that went into circulation on Sunday.Central bank governor Duraid Durgham said the 2,000-pound note was one of several new notes printed years ago but the decision to put it into circulation was delayed "due to the circumstances of the war and exchange rate fluctuations."The new note is equal to around $4 at current exchange rates. The currency has plunged in value since the conflict began in 2011, from 47 pounds to the dollar in 2010 to around 500 pounds to the dollar at present.Citing wear and tear of the existing notes, Durgham said the time was right to put the new note into circulation, the state news agency SANA reported.Previously, the highest denomination of Syrian banknote was 1,000 pounds. Assad's father, the late President Hafez Assad who died in 2000, appeared on coins and on an older version of the 1,000 pound note, which is still in circulation.Durgham said the new note was put into circulation "in Damascus and a number of the provinces."After years of war estimated to have killed hundreds of thousands of people, Assad appears militarily unassailable thanks in large part to direct military support from his allies Russia and Iran.