Israel and Azerbaijan are natural allies since “both countries see Iran as an existential threat.” 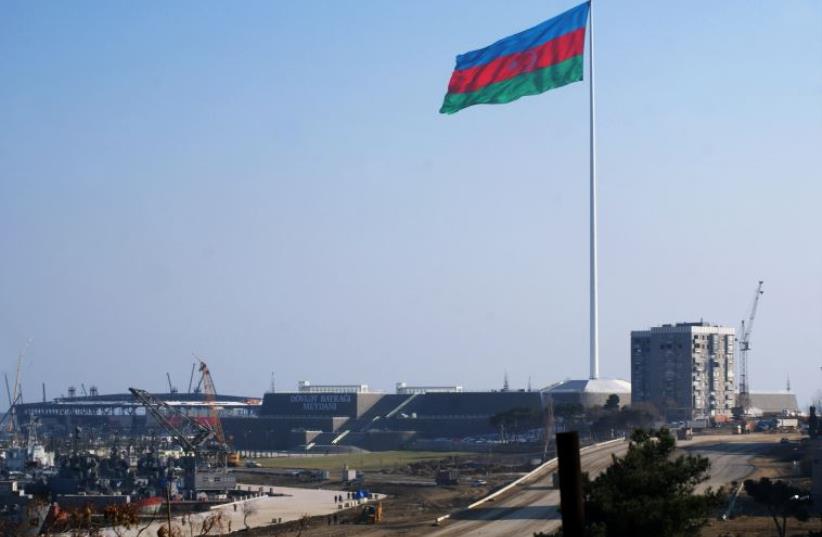 An enormous Azerbaijani flag flies above the construction site of a landmark concert hall on the Caspian Sea shoreline in Baku
(photo credit: SAMIR ALIYEV/AFP)
Advertisement
Azerbaijan went to the polls earlier in the week in an event that was shunned by both the country’s main opposition parties and even by international election monitors. One exception was a group of several Israeli politicians who flew into the oil rich nation to observe the proceedings. Although this is unlikely to improve the poll’s credibility it does demonstrate the intimacy of the relationship between the Jewish state and its closest Muslim ally, experts said. Location explains Azerbaijan’s standing in the world. Situated on the oil rich Caspian Sea, the state is wooed by Western governments seeking an alternative to Russia as a source of energy imports. Israel is one such customer and in return sells large quantities of sophisticated weaponry to Azerbaijan, partly in exchange for oil.
Much of the oil Israel purchases – about 40% -- travels through the Baku–Tbilisi–Ceyhan (BTC) pipeline, Gallia Lindenstrauss, a research fellow at the Institute for National Security Studies, told The Media Line. The BTC runs overland from Baku, the country’s capital on the Caspian Sea, through Georgia, and ends in Turkey. “Historically speaking, Israel put a lot of importance on energy security,” Lindenstrauss said. This caused Israel to pursue a close relationship with the Caucasus state, and led to it recognizing Azerbaijan shortly after it declared independence in 1991. Equally important to Israel is Azerbaijan’s southern border with Iran, a country with no love lost for Baku, despite both countries’ populations being predominantly Shi’ite Muslim. This makes Israel and Azerbaijan natural allies since “both countries see Iran as an existential threat,” Lindenstrauss observed.There are ample reasons for Azerbaijan to welcome its alliance with the Jewish state: some with a view toward Iran and others due to Armenia, according to Alexander Murinson, an independent researcher with the Begin-Sadat Center and author of Turkey's Entente with Israel and Azerbaijan. Armenia and Azerbaijan became embroiled in an ethnic conflict following the collapse of the Soviet Union, a dispute which continues to dominate their interactions. “Joint containment of Iran, access to high-tech Israeli military, [and the] blocking of the Armenian diaspora in the United States by the Jewish lobby,” are incentives for Azerbaijan to court Israel, Murinson suggested. The Azerbaijan-Israel association suits both parties well. The selling of sophisticated weapons to Azerbaijan is “another attempt at psychological pressure on Iran” by the Jewish state, the author explained. Drone and air defense technologies make up the bulk of such exchanges.But the cooperation goes further than this. Azerbaijan’s location makes it a natural back door into Iran. There are reports suggesting that all of Israel’s covert espionage activities conducted against Iran were based in Azerbaijan, including the assassinations of the nuclear scientist Mostafa Ahmadi Roshan, Murinson said. The Iranian foreign ministry has accused Azerbaijan of collaborating with the Israeli foreign intelligence agency, the Mossad, and of acting as a safe house for its operations. Azerbaijan’s proximity to Iran could also enable it to function as an airfield or refueling stop for Israeli jets conducting raids against targets in Iran.  Turkey adds another piece to this complex arrangement. Previously, a triangle alliance was created between it, Azerbaijan and Israel. But following a long term cooling of relations between Ankara and Israel due in large part to the Mavi Marmara incident in 2010, Azerbaijan came under pressure to distance itself from Israel. Nine Turkish activists were killed on the ship when Israeli commandos stormed the ship as it was attempting to circumvent the Israeli blockade and sail to the Gaza Strip. Although the cultural connection between Azerbaijan and its “big brother” Turkey is extremely close, expediency and regional ambition caused the smaller state to stick to its alliance with Israel, Murinson argued.In recent years, the under the radar relationship appeared problematic for the United States, too, as Washington was concerned that Israel would use Azerbaijani airfields to strike at Iran, Lindenstrauss said. This would have disrupted attempts to negotiate the nuclear agreement between Iran and Western states that was recently signed, and which Israeli Prime Minister Benjamin Netanyahu has been consistently opposed to. With an ally able to both provide oil and pressure Iran, Israel doesn’t want to look too closely at the domestic politics of Azirbaijan. This, Lindenstrauss suggested, is a common trend in Israeli foreign affairs where realpolitik is central. The elections which took place recently, and which comfortably returned incumbent Ilham Heydar Aliyev to power, were boycotted by observers from the Organization for Security and Cooperation in Europe (OSCE). Monitors for the poll had not been guaranteed sufficient access to ensure transparency, the OSCE said. Most members of the opposition boycotted the election as well.“It’s hard to talk about free and fair elections in a country where freedom of expression and assembly are restricted, and journalists who should be reporting on elections, and NGO activists who should be monitoring them are in jail,” Giorgi Gogia, Human Rights Watch’s researcher for Azerbaijan, told The Media Line.

However there are limits to how far and to how visibly the relationship will go. Although an Israeli embassy exists in Baku, Azerbaijan has never deemed to open a diplomatic headquarters in Tel Aviv. The Azerbaijani government always feared that doing so would make fellow Muslim states less likely to support it in its dispute with Christian Armenia, Lindenstrauss explained. As for the future of the Israel-Azerbaijan relationship, it is likely to continue unless Israel breaks its long kept silence on the Armenian Genocide, Zeev Levin, a historian with the central Asian and Caucasus research unit at the Hebrew University, told The Media Line. Such a change in stance might drive Azerbaijan away from Israel and into the arms of Ankara. For more Media Line stories, visit www.themedialine.org.