The former top diplomats said that the framework agreement with Iran effectively concedes any option of using military force to compel Iranian compliance. 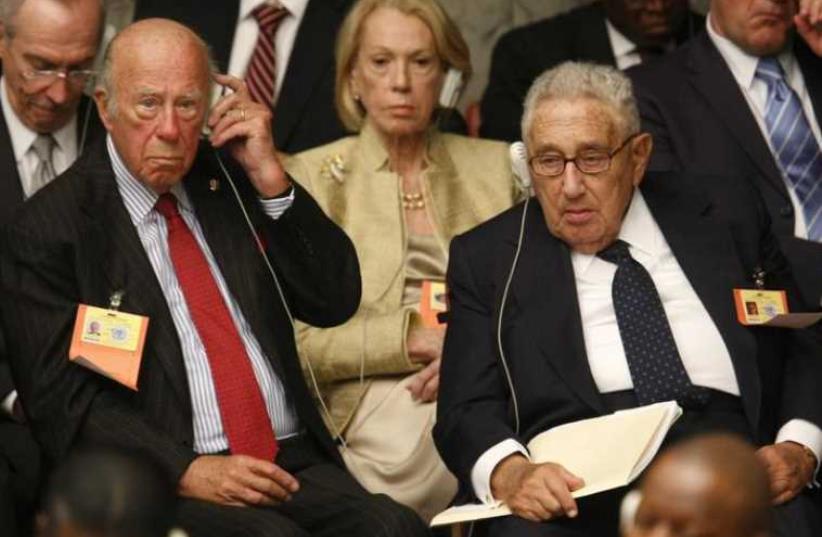 Former US Secretaries of State Henry Kissinger (R) and George Shultz attend a Security Council Summit meeting during the United Nations General Assembly at UN headquarters in New York
(photo credit: REUTERS)
Advertisement
Two former US secretaries of state - Henry Kissinger and George Shultz - penned an op-ed for The Wall Street Journal on Wednesday criticizing President Barack Obama for the framework agreement his administration reached with Iran last week.The former top diplomats said that the framework agreement with Iran effectively concedes any option of using military force to compel Iranian compliance.“Mixing shrewd diplomacy with open defiance of UN resolutions, Iran has gradually turned the negotiation on its head,” Kissinger and Shultz wrote in the Journal. “Iran’s centrifuges have multiplied from about 100 at the beginning of the negotiation to almost 20,000 today. The threat of war now constrains the West more than Iran.”“While Iran treated the mere fact of its willingness to negotiate as a concession, the West has felt compelled to break every deadlock with a new proposal. In the process, the Iranian program has reached a point officially described as being within two to three months of building a nuclear weapon. Under the proposed agreement, for 10 years Iran will never be further than one year from a nuclear weapon and, after a decade, will be significantly closer.”The two former secretaries say that while they have “respect” for the Obama administration’s efforts to place constraints on Iran’s nuclear program, the major challenge in ensuring that Tehran doesn’t gain possession of an atomic device is the verification mechanisms called for in the deal.“Comparable ambiguities apply to the one-year window for a presumed Iranian breakout,” they write. “Emerging at a relatively late stage in the negotiation, this concept replaced the previous baseline - that Iran might be permitted a technical capacity compatible with a plausible civilian nuclear program. The new approach complicates verification and makes it more political because of the vagueness of the criteria.”“Under the new approach, Iran permanently gives up none of its equipment, facilities or fissile product to achieve the proposed constraints. It only places them under temporary restriction and safeguard - amounting in many cases to a seal at the door of a depot or periodic visits by inspectors to declared sites. The physical magnitude of the effort is daunting. Is the International Atomic Energy Agency technically, and in terms of human resources, up to so complex and vast an assignment?”Kissinger and Shultz called into question whether Iran - given its track record of violating international commitments - could be trusted in abiding by the terms of any agreement it signs with the West."In a large country with multiple facilities and ample experience in nuclear concealment, violations will be inherently difficult to detect," they wrote. "Devising theoretical models of inspection is one thing. Enforcing compliance, week after week, despite competing international crises and domestic distractions, is another." "Any report of a violation is likely to prompt debate over its significance - or even calls for new talks with Tehran to explore the issue. The experience of Iran’s work on a heavy-water reactor during the 'interim agreement' period - when suspect activity was identified but played down in the interest of a positive negotiating atmosphere - is not encouraging."