Out of 20,237 students eligible to vote, 11,765 participated in the elections at an-Najah, the largest university in the West Bank. 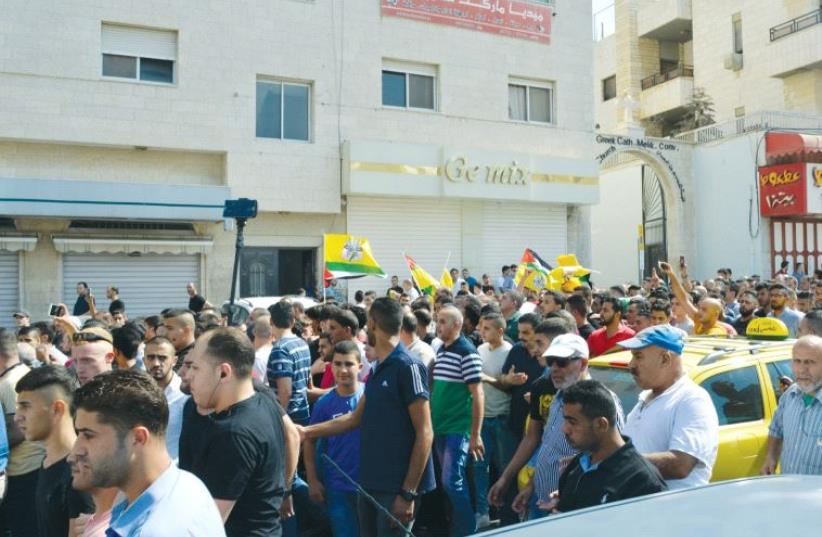 Protesters wave Fatah and Palestinian flags during a demonstration in Nablus in August 2016.
(photo credit: UDI SHAHAM)
Advertisement
The Fatah-affiliated Shabibah won a total of 41 of 81 seats on the student council at an-Najah National University in Nablus, while the Hamas-backed Islamic Bloc won 34 seats, Student Affairs Dean Musa Abu Dia told Wafa, the official Palestinian Authority news site, on Tuesday.Out of 20,237 students eligible to vote, 11,765 participated in the elections at an-Najah, the largest university in the West Bank.Student elections in the Palestinian territories are viewed as important barometers of public opinion, since Hamas and Fatah have not competed against each other in municipal, legislative or presidential elections since the 2006 legislative elections.“These elections are an important indication of where the Palestinian street stands,” said Khaled Musleh, an-Najah Central Elections Committee spokesman.Student elections at an-Najah have not taken place since 2013 because the various student blocs had previously failed to reach agreements to hold elections.In the 2013 elections at an-Najah, Fatah won 43 seats, while Hamas garnered 33 seats.Fatah Central Committee member Muhammad Shtayyeh told The Jerusalem Post that the election results are “a referendum on Fatah’s political program, which is led by [Palestinian Authority] President [Mahmoud] Abbas.”“It is clear that while Fatah has strong support among the youth, support for Hamas is declining,” Shtayyeh added.Fatah won two student elections in the past month at Palestine Technical University – Khadouri, in Tulkarm, and Bethlehem University, both of which Hamas boycotted.A recent poll found that if legislative elections were held, 30% of the Palestinian public would vote for Hamas, whereas 36% would vote for Fatah.Hamas leader Faza Sawafta said the results are a “victory” for Hamas.Sawafta said that the 34 seats Hamas won are remarkable in light of restrictions Israel and PA security forces placed on its candidates and supporters.The next major student council election will take place at Bir Zeit University in Ramallah on May 10. Similar to an-Najah, Bir Zeit is considered a bellwether of Palestinian public opinion.Hamas won elections at Bir Zeit for the past two years.