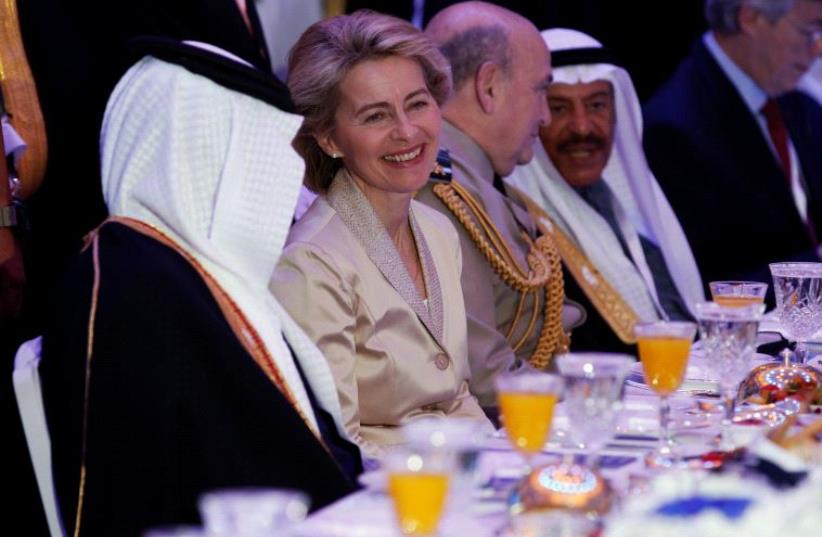 Germany's Defense Minister Ursula von der Leyen in Manama, Bahrain, December 9, 2016
(photo credit: REUTERS)
Advertisement
A high-ranking German official on Wednesday refused to wear a hijab while visiting Saudi Arabia, insisting that women have the same right as men  to choose what they wear, according to the Daily Mail.German Defense Minister Ursula von der Leyen decision reportedly sparked anger across the Islamic Kingdom, with Saudi social media users calling for authorities to place her under arrest.One Saudi social media user asked: "Ok so why didn't they arrest her? The hypocrisy and double standards."Another posted: "The German Defense Minister: Not wearing the hijab in Saudi was deliberate. This is an insult to Saudi Arabia,"  the Daily Mail noted.
Germany"s Merkel says burka "does not belong in our country"
Leyen's refusal to wear the traditional Islamic garb, also known as a abaya, came just  a week after German Chancellor Angela Merkle called for the burka to be banned, the Daily Mail added.The defense minister, in the kingdom to meet deputy crown prince Salman bin Abdulaziz Al-Saud, instead opted to wear a dark blue suit. She reportedly voiced her concerns with Al-Saud during their meeting.In public comments later reported by German media, Leyen said : "No woman in my delegation has to wear the abaya.""The right to choose your own clothing is a right shared by men and women alike. It annoys me when women are to pushed into wearing the abaya," German newspaper Das Bild reported.Issues concerning appropriate attire for women in Saudi Arabia were unleashed earlier in December, when a woman dared to stroll the streets of Riyadh without the abaya or hijab. She later braved a wave of death threats after a picture of herself without wearing a hijab was posted to social media, the International Business Times reported.The Daily Mail later reported that the woman, identified by several Saudi websites as Malak Al Shehri, was placed under arrest by authorities for the violation. A police statement later said Saudi Police acted in line with their duty to monitor "violations of general morals." It is unclear if Shehri remains in detention.