In 2003, there were around 1.6 million Christians in Iraq, today there are less than 150,000 Christians remaining. 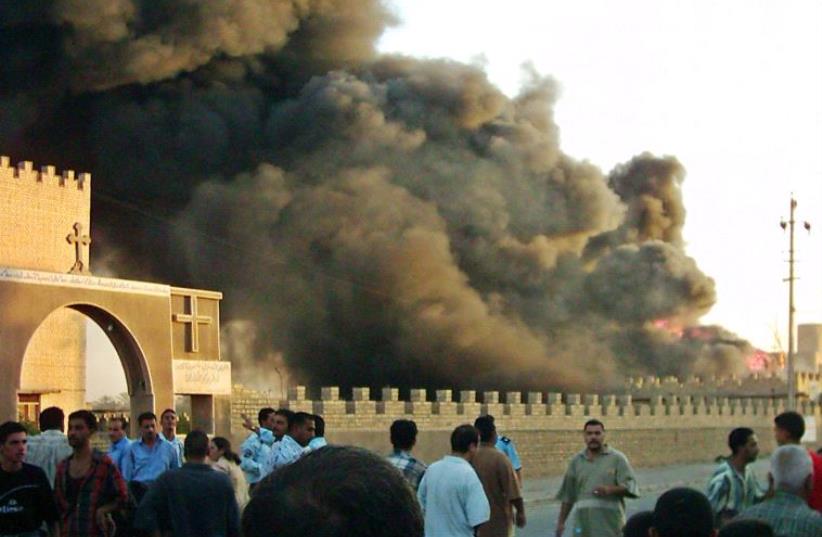 Iraqis crowd the area after an explosion in the car park outside an ancient Chaldean monastery in the Baghdad suburb of Al Doura.
(photo credit: REUTERS)
Advertisement
In one of the oldest lands of Christianity, Assyrian Christians are awaiting their third Christmas since extremists from Islamic State made hundreds of thousands into refugees in 2014. “Around Nineveh [in northern Iraq] the only people are the soldiers and the clergy,” says Juliana Taimoorazy of the Iraqi Christian Relief Council. “They want to go back and return to their homes and rebuild in the spring.”In 2003 on the eve of the US invasion of Iraq which toppled Saddam Hussein there were around 1.6 million Christians in Iraq. Most of these were Assyrian Christian members of the Assyrian Church of the East or Chaldean Catholic Church. They lived throughout Iraq but were concentrated in Baghdad and in the area of Nineveh Plains around Mosul in northern Iraq which borders the Kurdish region. In 2014 when ISIS took Mosul they expelled the Christians. Over the last two years it mined Christian towns such as Bakhdida and Tel Keppe, digging tunnels under the houses and damaging the churches. It dynamited the 1,400 year old St. Elijah’s monastery.
The Mar Behnam Christian monastery near Mosul, Iraq. Credit: Reuters
Christians in Iraq celebrating Christmas in 2015
Christians fled to refugee camps in the Kurdistan Regional Government and many left for other countries, joining an Assyrian diaspora that lives throughout the Middle East and the United States. Taimoorazy, who fled Iran as a teenager in 1989, says that there are less than 150,000 Christians in Iraq today. But they are determined not to let ISIS have the final say. “I’ve noticed dedication among the generation after ISIS. Young people want to return and help rebuild it and they want to be equipped to fight.” In northern Iraq today there are Assyrian Christian units that fight alongside the Iraqi army and Kurdish Peshmerga. This includes Nineveh Plains Protection Units (NPU) and Nineveh Plains Forces. They were instrumental in protecting Christian villages such as Teleskof, and in liberating Bakhdida and Bartella, where the bells of the Church rang for the first time on October 22 after two years.  Taimoorazy, who is also a senior fellow at the Philos Project, an organization which works for “Christian engagement in the Middle East,” says Assyrians deserve tangible power on the ground after ISIS is gone. “The Iraqi constitution says minorities can have their own province…the only way it will be done is when our boys and girls can protect their own [community], if we have the support of the international community and the Iraqi government equips and trains these [Assyrian] soldiers.” Nineveh plains are a complex mosaic of minorities. Before the rise of ISIS there were calls for greater autonomy for Turkmen, Yazidis and Sunni Arabs, modeled on what the Kurds have created. ISIS destroyed all that.Although most Assyrians sought shelter as refugees either in the Kurdish region or in Jordan, where 30,000 live, she says they are concerned about living under Kurdish rule. “We live on our knees,” says Taimoorazy. Feuds with Kurds and Muslims that go back hundreds of years and resulted in the massacre of Assyrians in 1917, 1933 and the 1940s leave their mark today. The rise of Al Qaeda in Iraq between 2004 and 2010 also saw numerous massacres and church bombings, similar in scale to the one in Cairo on Monday. For Taimoorazy a rebirth of Assyrian patriotism is needed that she says can be modeled on Zionism. “We can make ‘aliyah’ to Nineveh; we need friends in high places, we need the pride of the language; like Eliezer Ben-Yehuda who revived spoken Hebrew.” Some Assyrians speak their native language which is similar to Aramaic, but modern times have seen a decline in favor of Arabic. 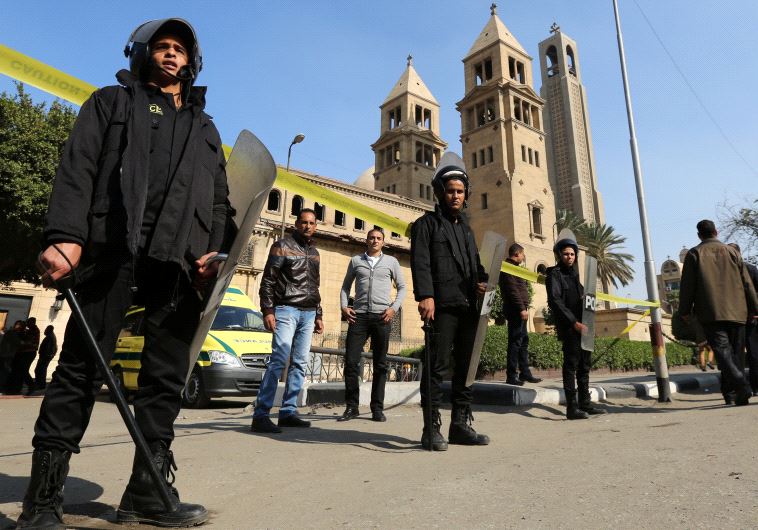 Members of the special police forces stand guard to secure the area around St. Mark's Coptic Orthodox Cathedral after an explosion. Credit: Reuters
Recently Father Yukoub Babawe of the Oum El-Nour Relief Committee of the Syrian Orthodox Church in Erbil spoke in Beirut about the plight of the church. At a seminar organized by the World Council of Churches and Middle East Council of Churches he “underlined that cooperation and networking among the church and Church-related relief and development organizations needs improving,” according to a report at Al-Bushra.org. In Iraq the optimism about the defeat of ISIS in Mosul is wearing off. In Erbil last year many Christians told me they were concerned that 2015 was their last year in Iraq. Now another year has passed and the Iraqi army is still battling over Mosul and Christian residents often cannot stay in liberated areas like Bakhdida after dark. A town of 50,000 is still uninhabited. “We think Iraq is like a black whole where people have suffered and will continue to suffer,” says Taimoorazy. After her organization sent financial support for 1,000 children over the Christmas holiday, she hopes the new US administration will care about groups like the Assyrians and their attempt to rebuild their lives after ISIS.