In Marrakesh, Israelis return to their Moroccan roots to seek a new life – or flee the police

Prior to Israel’s establishment, Morocco’s Jewish community numbered about 250,000. Now the community stands at some 3,000 with the vast majority living in Casablanca. 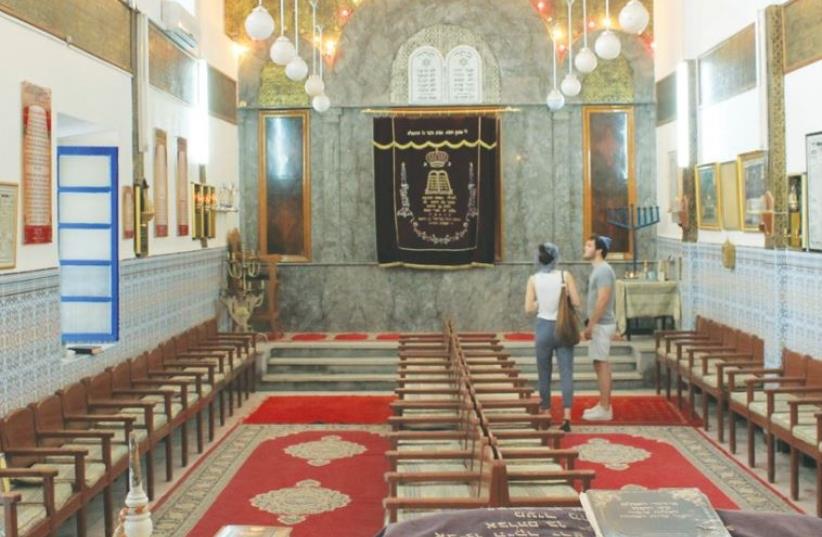 TOURISTS VISIT the Lazama Synagogue in Marrakesh, Morocco.
(photo credit: KATI ROUMANI)
Advertisement
MARRAKESH – The Lazama Synagogue in Marrakesh, Morocco, has high ceilings with ornate lighting and rugs lining the floor.On hot summer days the windows are open and birds stream in from the adjacent blue and white courtyard, while congregants keep cool with handheld fans made of thatch palm.Pinhas Suissa’s head is bent over his prayer book. He is a 60-year-old Moroccan Jew who grew up in Israel, but returned to live in Morocco in 2004.Originally Suissa moved to his childhood village of Agouim in the Atlas Mountains, but he wanted to live closer to a synagogue and eventually found his way to Marrakesh. Now he attends Lazama daily and is a part of the city’s small Jewish community.While not a major movement, Suissa’s move characterizes a number of Israelis who have left the Jewish state in favor of the Kingdom of Morocco. Some return to reconnect with their heritage, others seek economic benefits, and in some cases, Israelis use Morocco as a safe haven to fleecriminal investigations.Prior to Israel’s establishment, Morocco’s Jewish community numbered about 250,000. Now the community stands at some 3,000 with the vast majority living in Casablanca.Kati Roumani, an historian and tour guide at Lazama who has lived in Marrakesh since 2008, says the registered Jewish community in Marrakesh is about 80 people. However, there are up to 500 Jews living in Marrakesh, most of whom are not active in the community.Nevertheless, there are still enough men to form a minyan every Shabbat, who meet in the 15th-century Lazama tucked down an alleyway near Marrakesh’s famous Jemaa el-Fnaa, the city’s central square and market.The congregation, which consists of mostly older men in their 60s and 70s, is a mixture of Jews who grew up in Morocco, three Moroccan Jews who returned to their native country and tourists.“I was born in Morocco and I will die in Morocco,” Suissa says, as we wind through the alleyways of Marrakesh’s Old City after a Shabbat prayer.“Here I feel truly at home,” he says in Hebrew before seamlessly switching to Arabic to chat with a spice vendor.Suissa moved to Israel when he was seven and lived a typical life, serving in the IDF and working as a building contractor.Yet he says he always felt a deep sense of being Moroccan.“In the army, they would call me crazy because I always carried a Moroccan flag.”At 27, Yaakov Ifrach is an exception to the generally advanced age of the congregation.Ifrach moved to Morocco from Israel around a year ago and has undertaken a number of projects, including renovating a section of Lazama and establishing a museum next to the synagogue.According to Suissa, Ifrach moved to Morocco because of his connection to his Moroccan- Jewish heritage and a passion for local music.For both Ifrach and Suissa, Morocco is an exceptionally safe place to be a Jew.Sam Ben Chetrit, chairman of the World Federation of Moroccan Jews, concurs. “The Jews in Morocco say there is no racism directed toward them and there are good relations with the Muslim community and King Mohammed VI safeguards Jewish sites,” he says.Nevertheless, as congregants leave Lazama they remove their kippot, replacing them with inconspicuous baseball caps.Earlier this month an elderly Jewish couple in Casablanca was murdered and dismembered by their gardener. While theft appears to be the main motive, the gruesomeness of the crime may indicate anti-Semitic motives.For some returnees, Morocco, which has a significantly lower cost of living, offers the ability to live in relative luxury and pursue business ventures.After leaving a bankrupt business in Israel, Suissa has found a niche as a middleman for Moroccan exports to Israel.Others members of the community are wealthy and own numerous properties. One member of the congregation is a well-known nightclub singer and owns a business selling etrogim.In other cases, Moroccan-Israelis return to flee criminal investigations. Morocco, which lacks an extradition treaty with Israel and allows those with Moroccan heritage to obtain citizenship, has provided an unusual safe haven for mobsters. According to a 2013 report on the Al Monitor site by former Jerusalem Post reporter Ben Hartman, in the Israeli underworld it has become “trendy” to seek refuge in Morocco.Rabbi Eliezer Berland, wanted for sex crimes, sought refuge in Morocco, living in Marrakesh for seven months before being expelled in November 2013.Nevertheless, according to Ben Chetrit, Israelis returning to live in Morocco is uncommon.“Many Israelis visit because of nostalgia, friendships, or because Morocco is hospitable. But returning to live is very unusual and not a reflection of the community in general.”Although Suissa’s journey back to Morocco is unusual, he nonetheless appears perfectly at home in Marrakesh.As the congregants of Lazama leave the Old City, they each kiss an ancient archway while walking underneath.Under this arch it is said that Rabbi Mordechai Ben Attar, one of the founders of the Mellah Jewish quarter, raised a wall of flame to protect the community from marauding tribesmen. Suissa follows suit, giving his right hand a kiss after tapping the archway.“You can say I returned to Morocco,” he says with a smile “but actually I have been here for the past thousand years.”