Russia: Loss of Iranian nuclear deal would be 'unforgivable'

Russian ministry also says it was disappointed by plans by the US to extend its Iran Sanctions Act by 10 years. 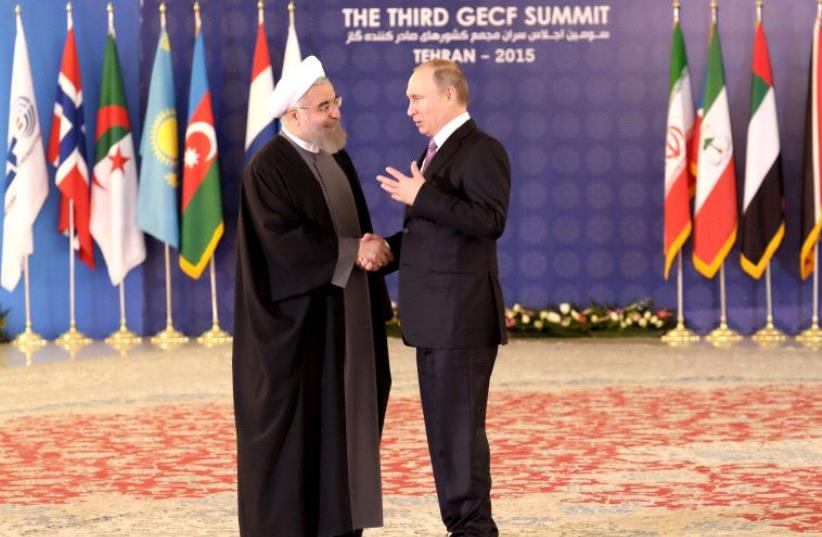 Iran's President Hassan Rouhani (L) welcomes Russia's President Vladimir Putin during the Gas Exporting Countries Forum (GECF) in Tehran November 23, 2015
(photo credit: REUTERS)
Advertisement
MOSCOW - It would be unforgivable if a deal over Iran's nuclear program was lost, Russia's Foreign Ministry said on Thursday, the Interfax news agency reported.The ministry also said it was disappointed by plans by the United States to extend its Iran Sanctions Act by 10 years.Meanwhile on Thursday, the White House said the bill extending US sanctions against Iran for 10 years will become law without President Barack Obama's signature, but will not affect implementation of the international accord limiting Iran's nuclear program.
Iran Foreign Minister Zarif hopes nuclear deal is kept once the dust settles
"This Administration has made clear that an extension of the Iran Sanctions Act, while unnecessary, is entirely consistent with our commitments in the Joint Comprehensive Plan of Action (JCPOA). Consistent with this longstanding position, the extension of the Iran Sanctions Act is becoming law without the President's signature," a White House statement said. Thursday's remarks came after Iran's President Hassan Rouhani on Tuesday ordered scientists to start developing systems for nuclear-powered boats, in reaction to what he called the United States' violation of a global atomic deal.The announcement marked Iran's first concrete response to a US Congress decision last month to extend legislation making it easier for Washington to reimpose sanctions on Tehran.Rouhani described the technology as a "nuclear propeller to be used in marine transportation," but did not say whether that meant just ships or possibly also submarines. Iran said in 2012 that it was working on its first nuclear-powered sub.His words will stoke tensions with Washington, already heightened by comments from US president elect Donald Trump who has vowed to scrap the deal, under which Iran agreed to curb its nuclear activities in exchange for lifted sanctions.There was no immediate reaction from the Vienna-based International Atomic Energy Agency, which monitors Iran's nuclear work."The United States has not fully delivered its commitments in the Joint Comprehensive Plan of Action (the nuclear deal)," Rouhani wrote in a letter published by state news agency IRNA."With regards to recent (US congress) legislation to extend the Iran Sanctions Act, I order the Atomic Energy Organization of Iran to ... plan the design and construction of a nuclear propeller to be used in marine transportation to be used in marine transportation."US Congress members have said the extension of the bill does not violate the nuclear deal agreed last year to assuage Western fears that Iran is working to develop a nuclear bomb. The act, Congress added, only gave Washington the power to reimpose sanctions on Iran if it violated the pact.Washington says it has lifted all the sanctions it needs to under the deal between major powers and Iran.But Iran's Supreme Leader, Ayatollah Ali Khamenei said last month that the extension was a definite breach and Iran would "definitely react to it".Iran always argued its nuclear program was for peaceful purposes.