Cleric Muqtada al-Sadr called the potential embassy move a “declaration of war on Islam,” and threatened the US embassy in Baghdad. 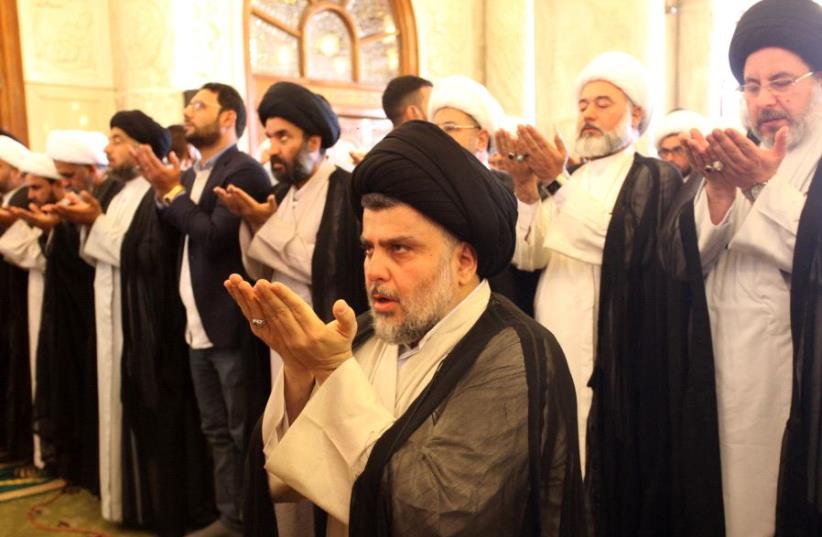 Iraqi Shi'ite radical leader Moqtada al-Sadr (C) takes part in Friday prayers at the Kufa mosque near Najaf, Iraq .
(photo credit: REUTERS)
Advertisement
Muqtada al-Sadr, an Iraqi Shi’a cleric, politician and militia leader, has called for the formation of a special force to “liberate Jerusalem” in response to claims US President Donald Trump would move the embassy to Israel’s capital.Sadr, who has a long history of inflammatory statements against the US, in a statement on Tuesday called the potential embassy move a “declaration of war on Islam” and threatened the US Embassy in Baghdad.In 2004, shortly after the US-led invasion overthrew Saddam Hussein and permitted Shi’a leaders like Sadr to work openly, he gave an interview to CBS calling the US the “great serpent.” From 2004 to 2008, his militia, the Mahdi Army, attacked US coalition troops and was a thorn in the side of the newly elected Iraqi government.Sadr also has sought to link the conflict in Iraq to Israel before; In 2009, he encouraged attacks on US troops in Iraq as a “reprisal” for Israel’s Gaza offensive that year. “Place Palestinian flags on the roofs of buildings and mosques,” he told his followers. In 2016, Sadr sent his followers to stage a sit-in in the heavily fortified Green Zone in Baghdad, taking over government buildings in a show of force in Baghdad.In his Tuesday statement, Sadr, whose militia has been accused of atrocities against Sunnis in Iraq, sounded a unifying pan-Islamic message on Jerusalem, telling the Arab League and Organization of Islamic Cooperation to take measures against the US if the embassy is moved.The cleric, who has opposed the US role in Iraq and threatened Americans who are taking part in the war against ISIS, said the US Embassy in Baghdad should be shuttered in response to any US policy change on Jerusalem.Some on social media were not convinced by Sadr’s outburst.“Sadr will kill more Sunnis in Iraq and Syria if Trump moves the embassy to Jerusalem,” one user wrote on Twitter. Another writer named Bashir al Raes responded by comparing Sadr’s protestations on Jerusalem with Hezbollah leader Hassan Nasrallah.Like Nasrallah, Sadr seeks to use Jerusalem as a unifying issue but he is seen as a sectarian leader in a Middle East where Shi’a militias are connected to Iran and Syria’s Bashar Assad.There is no evidence Sadr’s call for a special force to “liberate” Jerusalem if the embassy is moved is anything more than his usual threats. It shows, however, that an embassy move could be used by regional politicians to inflame tensions and threaten US interests.