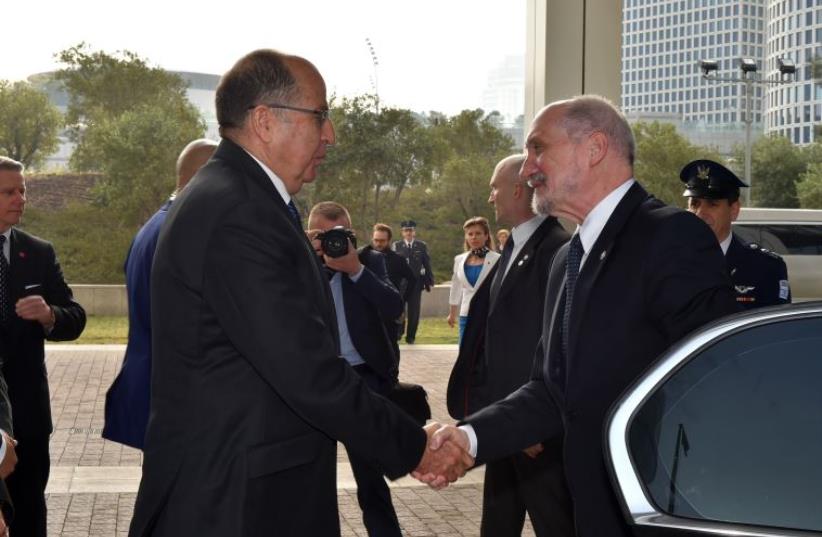 Defense Minister Moshe Ya'alon meets his Polish counterpart, Antoni Macierewicz, in Tel Aviv on Wednesday.
(photo credit: ARIEL HERMONI / DEFENSE MINISTRY)
Advertisement
There are “hundreds of jihadists planning to strike Western targets on European soil,” already present on the continent, Defense Minister Moshe Ya’alon told his Polish counterpart, Antoni Macierewicz, in Tel Aviv on Wednesday.“We are concerned that what we saw in Paris and Brussels is just the start, and that attempts to carry out terrorist attacks in Europe will continue,” he added.Turning his attention to events closer to home, Ya’alon said, “We do not expect there to be stability and an end to the bloodshed in Syria anytime soon.“In the war there, there are many conflicting interests and too many players in the arena.Some of these players, the global jihad organizations for example, are determined to continue fighting,” he added.Jihadists – radical Islamists whose primary ideology involves fighting the West – are stockpiling weapons and knowledge in Europe that they have obtained through fighting in Syria, and fostering extremist ideology, Ya’alon warned.Addressing the humanitarian catastrophe afflicting Syrian civilians, Ya’alon said that Israel is providing medicines, food, “and anything that refugees who reach our northern border need. As Jews, we cannot ignore this human tragedy.”Ya’alon, who hosted Macierewicz at his bureau at the Defense Ministry, discussed the latest situation in the Middle East, its influence on Europe, and on ways to continue strengthening Israeli-Polish defense ties.“Israel and Poland share common values and interests, as well as many, complex challenges,” Ya’alon said during the meeting. Security collaborations benefits both countries, he said. “Unfortunately, Israel is very experienced in dealing with these challenges, both in their conventional and terrorist perspectives, rockets, and more. We are prepared to cooperate and share knowledge and technology.”He stressed the cooperation between the Polish and Israeli defense industries, as well as defense establishments and armies.