Monitor: ISIS has murdered over 2,000 off the battlefield in Syria

The killings of mostly Syrians included deaths by beheading, stoning or gunshots in non-combat situations 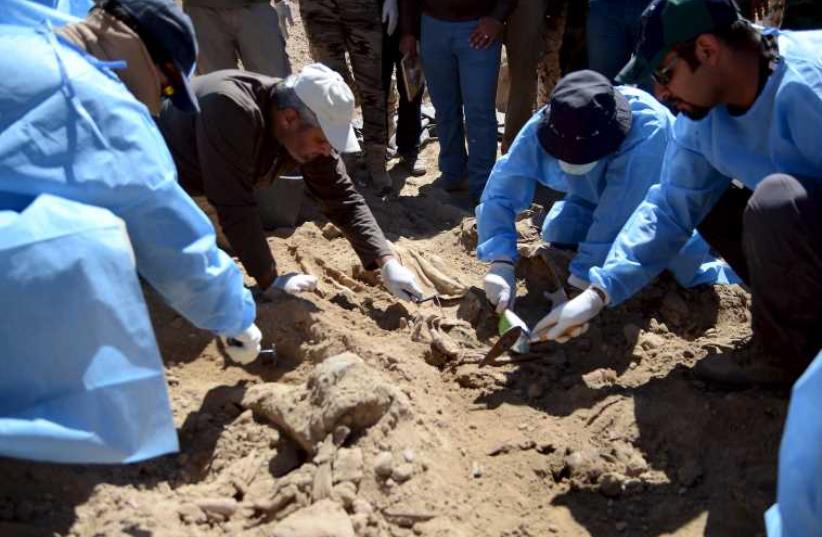 Iraqi forensics team begin excavating 12 mass grave sites believed to contain the remains of around 1,700 Iraqis massacred last summer by Islamic State militants.
(photo credit: REUTERS)
Ultra-radical Islamic State insurgents have killed at least 2,154 people off the battlefield in Syria since the end of June when the group declared a caliphate in the territory it controls, a Syrian human rights monitor said on Tuesday.The killings of mostly Syrians included deaths by beheading, stoning or gunshots in non-combat situations, the Britain-based Syrian Observatory for Human Rights said, urging the United Nations Security Council to act."We continue in our calls to the UN Security Council for urgent action to stop the ongoing murder against the sons of the Syrian people despite the deafness of members to the screams of pain of the Syrian people," it said in a statement.Islamic State, which also holds tracts of land in neighboring Iraq, is an offshoot of al-Qaida and has set up its own courts in towns and villages to administer what it describes as Islamic law before carrying out the killings.The Observatory, which tracks the conflict using sources on the ground, said its figure included combatants, civilians and also 126 Islamic State fighters who had tried to flee the group or were accused of being spies.It did not include several beheaded foreign journalists and a Jordanian pilot who was burnt to death by the group, so the probable figure is even higher, the Observatory's Rami Abdulrahman said. Hundreds of people believed captured by the Sunni Islamist group remain missing, he added.One of the worst massacres was against the Sunni Muslim Sheitaat tribe which had been battling Islamic State in eastern Syria. Islamic State has killed at least 930 Sheitaat tribespeople, the Observatory said.