Will Iran be taking lessons from North Korea on its nuclear activity?

By TOVAH LAZAROFF
SEPTEMBER 5, 2017 11:16
A missile is launched during a long and medium-range ballistic rocket launch drill in this undated photo released by North Korea's Korean Central News Agency (KCNA) in Pyongyang on August 30, 2017.
(photo credit: KCNA/VIA REUTERS)
Advertisement
Israel is worried about the impact an unchecked rogue nuclear state could have on Iran's own military ambitions.“Only a determined international response [to North Korea] will prevent other states from behaving in the same way,” Israel’s Foreign Ministry said in a rare response to the North Korean nuclear crisis.It issued its statement after North Korea said it executed an underground test for an advanced hydrogen bomb that could be placed on a long-range missile on Sunday.South Korea's defense ministry has warned that North Korea was ready to launch an Intercontinental Ballistic Missile (ICBM) at any time. North Korea has already demonstrated that it has the capacity to hit the US when it tested two ICBMs in July that could fly about 6,200 miles (10,000 km).
North Korea fires ballistic missile ahead of G20 summit (credit: REUTERS)
On Tuesday, South Korea warned of more provocative action from Pyongyang. For Israel “the main question will be what Iran will learn from the current crisis,” said Shaul Shay, who is the Director of Research at the Institute for Policy and Strategy (IPS) at IDC Herzliya.The reaction of the US and the international community to North Korea would send a signal to Iran on whether to proceed with the development of nuclear weapons, said Shay, who is the former deputy director of Israel’s National Security Council.Under a 2015 agreement with the six world powers — the US, Russia, France, China, the United Kingdom and Germany — Iran agreed to halt such activity and to curb its nuclear program such that it would not work to develop weapons of mass destruction.Israel objected to the deal because it did not strip Iran of the ability to create such weapons, but merely delayed the timeline.US threats of new sanctions against Iran for its non-nuclear activity and the negative attitude of the Trump Administration to the deal, has left Iran wondering if continued compliance with the deal is in its own interest.“Iran is watching the [North Korean] crisis very carefully. We have to take into consideration that the way that this crisis will end, will effect the Iranian policy,” Shay said.Iran has significant security relations with North Korea, which is one of the main sources of proliferation regarding missile and nuclear technology, Shay said.If it feels that the international community can tolerate North Korea’s activity, Iran could be emboldened to follow suit, the former security official warned.“If the US will not react and accepts North Korea as a nuclear power, and will permit it to continue with the development of the ballistic missiles with war heads, my concern is that Iran will conclude that it may be better to follow North Korea’s example,” he said. 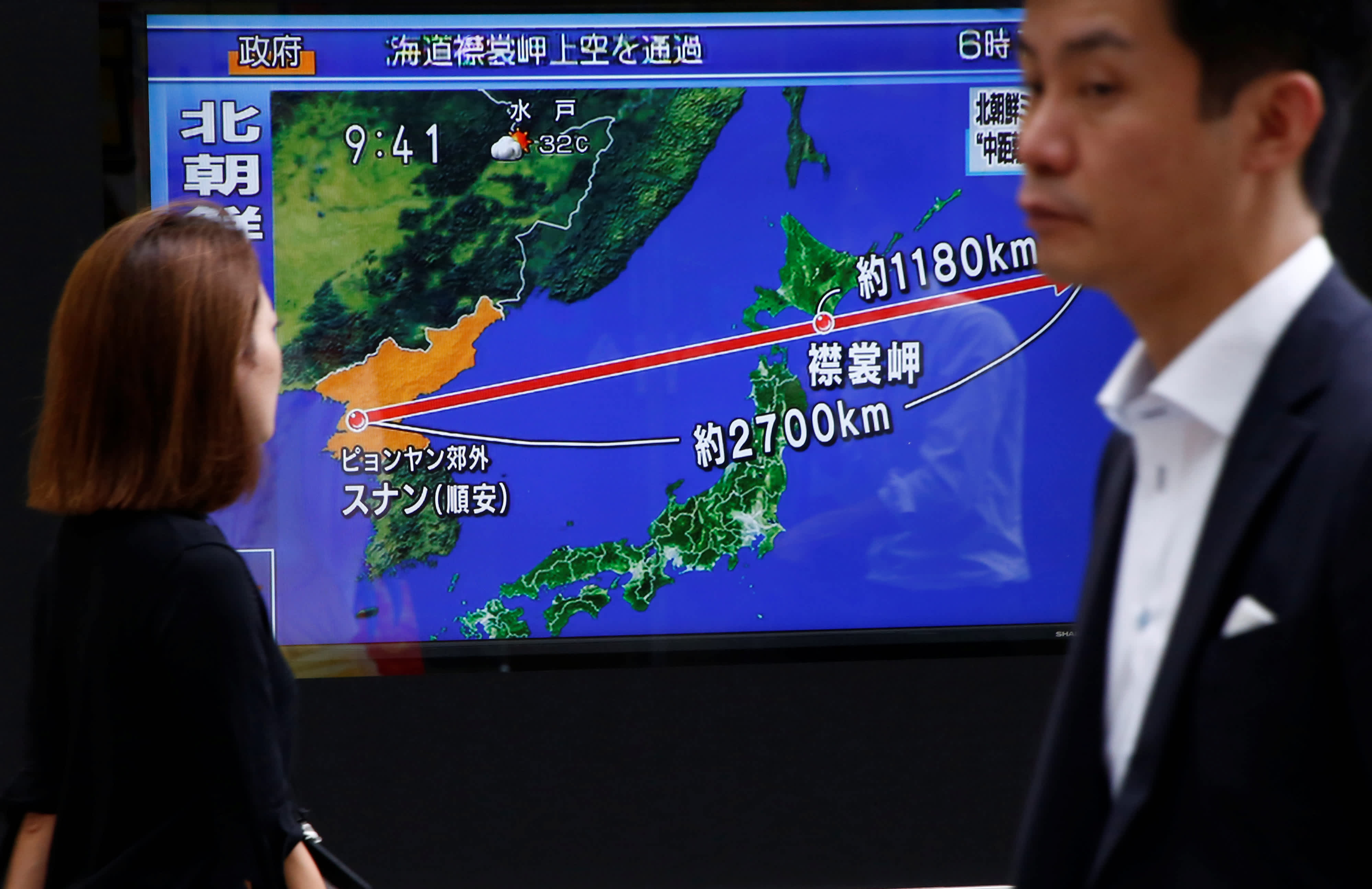 Pedestrians walk past a TV set showing news about North Korea's missile launch in Tokyo, Japan, August 29, 2017. (Reuters)The US has called on the United Nations Security Council to pass additional sanctions against North Korean next week.Shay said that the US is in a very sensitive position because it is hard to see how any kind of sanction or verbal threat will change the situation.Although the Foreign Ministry’s statement on North Korea was unusual, Prime Minister Benjamin Netanyahu has long linked the two rogue states.During the Obama Administration, Netanyahu often warned that Iran would go in the way of North Korea if the world did not take action to permanently halt its nuclear program.He made the comparison multiple times in speeches to the United Nations, the US Congress, the Jewish Federation of North America and to world leaders visiting Israel. Notably in January 2015, visiting Japanese Prime Minister Shinzo Abe, Netanyahu warned that North Korea would be capable of placing a nuclear warhead on a ballistic missile.“Iran and North Korea both have aggressive military nuclear programs and are developing nuclear weapons and the means to deliver them, ballistic missiles,” Netanyahu said.In 2013, he told the UN General Assembly that Iran believed it could build a nuclear weapons program after watching what happened with North Korea.“Like Iran, North Korea also said its nuclear program was for peaceful purposes. Like Iran, North Korea also offered meaningless concessions and empty promises in return for sanctions relief,” Netanyahu said.He spoke in reference to North Korea’s 1994 deal with the US to constrain its nuclear program, that eventually fell apart in 2003 under the Bush Administration for lack of implementation. 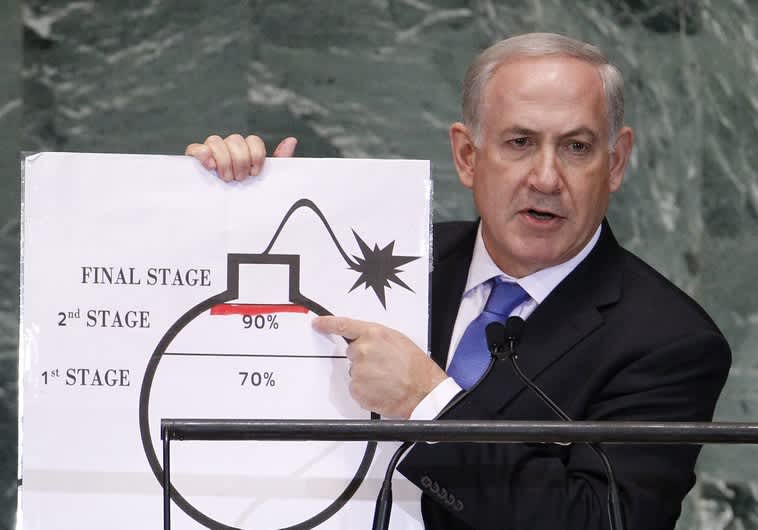 Netanyahu warns against nuclear Iran at 2012 UN General Assembly. (Reuters)Michael Mazarr, a senior political scientist at the RAND Corporation, said the two scenarios appeared similar, though there are differences that could prevent an apples to apples comparison.These include North Korea’s capacity to launch a devastating retaliatory attack against South Korea, as well as its 1961 security agreement with China, that have restrained international response.It’s unclear, however, whether China would honor the Soviet era pact in the face of aggressive North Korean military actions.Mazzar explained that “If they [DPNK] unilaterally attack the US at Guam, the security agreement will not apply. China has zero interest in North Korea attacking anyone.” China, however, is still likely to hold to the defense pact if the US takes preemptive action against North Korea, Mazarr said.North Korea's program is much more developed and its leadership is perceived to be much more unstable. There is a degree of international isolation and national paranoia with North Korea that does not exist with Iran, Mazarr said.Iran is partially integrated into the international community so Tehran has more incentive than North Korea to stick to its deal with the West, he continued.North Korea has more than 30 operational nuclear weapons, with some public reports claiming that number could actually be double, Mazarr said.The issue with Iran is still the timeline for it to acquire enough fissile material to produce its first nuclear weapon. “Iran would have to move ahead by leaps and bounds” before it reached the level of North Korea, Mazarr said.Reuters contributed to this report.