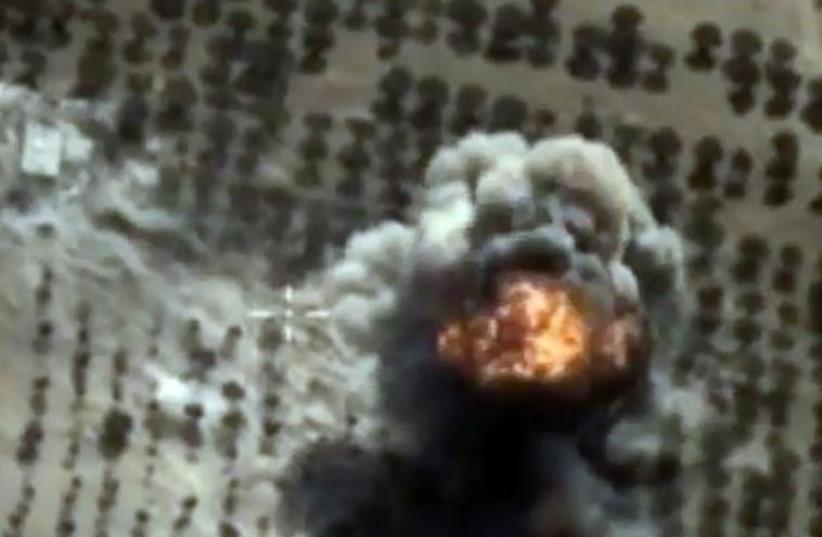 A video grab made on October 15, 2015, shows an image taken from a footage made available on the Russian Defence Ministry's official website, purporting to show an explosion after airstrikes carried out by Russian air force on what Russia says was an Islamic State facility in the Syrian province of
(photo credit: AFP PHOTO)
Advertisement
Russian air strikes in southern Syria represent a rise in the potential for inadvertent friction with Israel, a senior air combat expert told The Jerusalem Post on Thursday.Brig.-Gen. (res.) Abraham Assael, CEO of the Fisher Institute for Air and Space Strategic Studies in Herzliya, spoke a day after the international media reported that the Russian air force carried out strikes in Syria’s southern Deraa province, near the Jordanian border, for the first time since Moscow directly intervened in the Syrian civil war – the closest that Russian jets have come to the Israeli border.Referring to an incident in September 2014 in which the Israel Air Force Patriot missile downed a Syrian Sukhoi-24 jet that breached Israeli air space, Assel said that the shoot-down is “an example of the sensitivity that these things can cause. We do not know what the end result can be [from such incidents].”Although Israel and Russia have set up a joint working group to create a deconfliction mechanism to prevent inadvertent fire incidents in the air, sea, and the electromagnetic spectrum, Assael cautioned that human error could undermine such efforts.“As soon as the potential for friction goes up, even a very advanced and up-to-date mechanism cannot prevent human errors. If one side says, ‘Do not come close to this border,’ but someone breaches that, then what happens?” he asked.Assael, who in June took up his post as CEO of the Fisher Institute, is highly experienced in aviation and defense – a former air force base commander and former squadron commander with thousands of flight hours behind him.He told the Post that the closer proximity of Russian air operations, compared to past strikes in northern Syria in and around Latakia and Hama, “should worry us more.”Turkey is concerned about Russian breaches of its air space in northern Syria operations.When Russian planes get close to the Golan Heights, flying over Deraa, “the mere fact of this makes us a little more worried at the Fisher Institute, due to the potential of creating an unclear picture, and the potential for accidental friction, the end result of which is unknown.”In an ideal situation, Assael said, Russia would use its joint deconfliction mechanism with Israel to warn the IAF of impending strikes in Deraa. “But let’s remember that Russia perceives itself as a very influential power in the region.Additionally, things that are agreed upon do not always trickle down [the chain of command to the operational level]. This increases the potential for friction.”“We want to hope that there will be no misunderstandings,” Assael concluded, noting that there are few known details on the joint Russian-Israeli deconfliction mechanism.According to the Agence France-Presse, citing the Syrian Observatory for Human Rights monitor group, Russian warplanes struck in Hara, Tal Antar, Kafr Nasaj and Aqraba areas of northern Deraa on Wednesday.Deraa is home to a wide range of rebel groups, including the Al-Nusra Front, the report said.