Russian official in Israel: Envoy's murder in Turkey will up Moscow's strikes in Syria 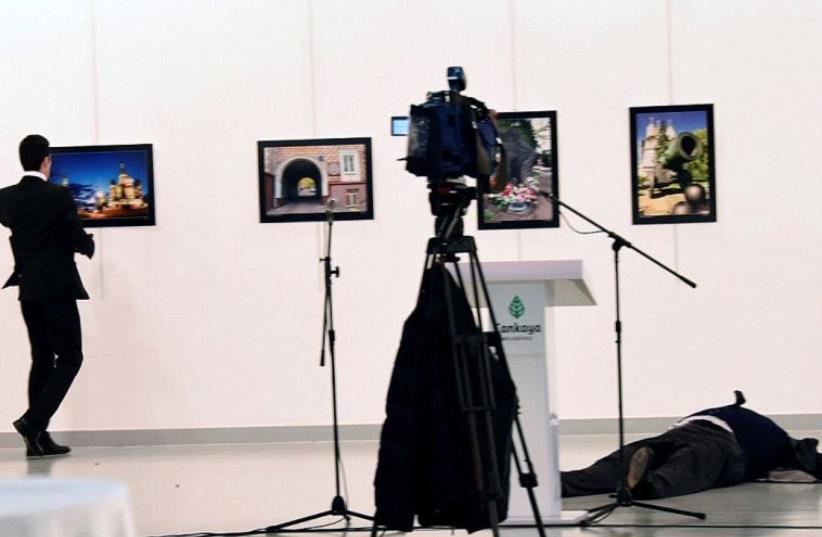 Russian Ambassador to Turkey Andrei Karlov lies on the ground after he was shot by unidentified man (L) at an art gallery in Ankara, Turkey, December 19, 2016.
(photo credit: REUTERS)
The assassination of Russia’s ambassador to Turkey in Ankara on Monday will lead to Moscow to increased its military involvement in the Syrian civil war, said Russian Deputy Ambassador to Israel Alexy Drobinin.The Russian diplomat made the remarks in an interview with Israel’s Channel 10 TV on Monday night. His comments came after an off-duty Turkish police officer shot and killed Russian envoy Andrei Karlov at an art gallery in the Turkish capital in an apparent revenge killing over Russia’s support of the Syrian regime and its recent bombardment of air strikes in the city of Aleppo.
Outside scene of site where Russian ambassador to Turkey Andrei Karlov fatally shot in Ankara
“I’m sure that this event, this terrorist attack, will only strengthen the resolve, the strikes, that Russia carries out against terrorist organizations in Syria,” the deputy ambassador told Channel 10.“In recent days there have been telephone conversations between [Russian] President [Vladimir] Putin and [Turkish] President [Recep Tayyip] Erdogan - I believe Russia will continue to carry out missions in Syria and this terrorist attack won’t affect that,” he added.Relations between Moscow and Ankara have long been strained over the conflict in Syria, with Moscow and Ankara supporting opposite sides in the war.On Monday night, Turkish President Recep Tayyip Erdogan said he spoke to Russia's Vladimir Putin and they both agreed the assassination of Russia's ambassador to Ankara by a gunman was an act of provocation by those looking to harm relations between their countries.A picture of Andrei Karlov of Russia and the scene outside of his shooting. (Credit: Reuters)In a video message broadcast on Turkish television, Erdogan said Turkey-Russia relations were vital for the region and those who aimed to harm ties were not going to achieve their goals.The Russian Foreign Ministry meanwhile stated that the death of ambassador Karlov marked one of the most serious spillovers of the Syria conflict.Turkey has struggled with a string of attacks by Islamist and Kurdish militants but the killing of a Russian envoy could have resonance throughout the region.