Syria jihadi expert: The project of Islamic State building a state structure is a failure, which could lead to members going back to al-Qaida 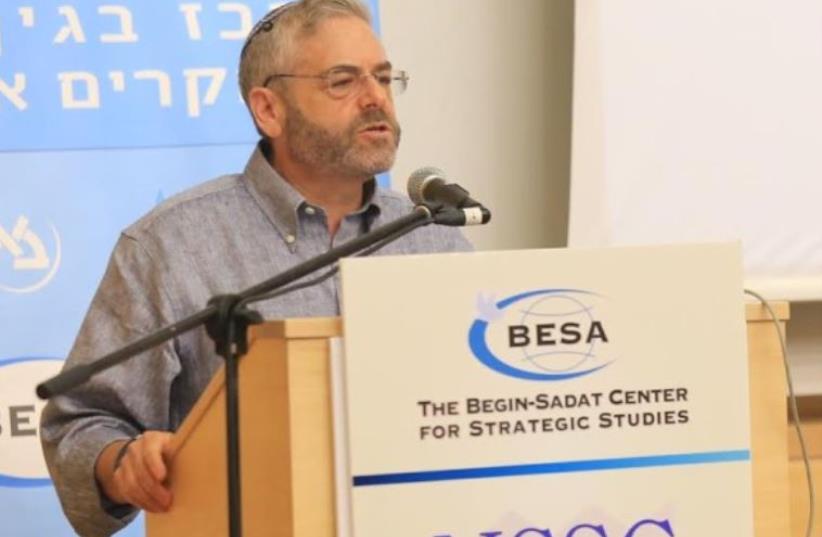 The BESA Center Prof. Joshua Teitelbaum speaking at international conference at Bar-Ilan University
(photo credit: YONI REIF)
Advertisement
“Gulf states are gradually going nuclear” and Saudi Arabia is likely to develop its nuclear program to Iran’s level, said on Tuesday Yoel Guzansky, a former Israeli official at the National Security Council in the Prime Minister’s Office and research fellow at the INSS.Guzansky was one of many international top experts on Saudi Arabia and the Gulf who spoke during the first day of a two-day conference on at Bar-Ilan University’s Begin-Sadat Center for Strategic Studies (the BESA Center).He argued that the Iranian nuclear deal sets a precedent where the US would deal with each country on a case by case basis. Guzansky also said that, mainly because of the Iranian threat, Saudi Arabia is probably going to accelerate its program as part of a hedging strategy.The nuclear deal between Iran and world powers “buys the Saudis a decade to rearm without breaking non-proliferation commitments,” he said, noting that there are plans in the works for 16 plants as part of a civilian program. However, the drop in oil prices probably affects the pace of these plans, he added.Nuclear energy is attractive for the Saudis since it would provide cheaper energy in the long term, but in reality it is being used “as an excuse for a nuclear program,” said Guzansky.There has been an erosion of trust with some regional players as the “Gulf fears a US pivot to Asia,” but “the greatest fear is a pivot towards Iran,” he said.There are Saudi ideological and strategic motives to go nuclear, continued Guzansky.“The nuclear deal may set a worrisome standard in the region and a cascade of threshold nuclear states,” he warned, adding that it is difficult to discourage countries to pursue what Iran received in its nuclear deal.“The Saudis are panicking” and as Iran strengthens itself, it is “preparing contingency plans,” he asserted, calling it a “slow motion nuclear arms race.”Asked if the Saudis have the technical ability for a nuclear program, he responded that the Saudis have a small group of scientists, some of whom study in the US, but they also have agreements with Egypt, which has a number of good scientists. The Pakistanis are another option for acquiring know-how. He noted that the UAE also do not have scientists but the South Koreans are building a nuclear plant there.Prof. Joshua Teitelbaum, an expert on Saudi Arabia and the modern Middle East at the BESA Center, described how the minority Shi’ite community in Saudi Arabia “went all out” in persistent protests following the breakout of the “Arab Spring” uprisings.These protests were largely in solidarity with their Shi’ite brethren in neighboring Bahrain, where Saudi Arabia and UAE sent forces in 2011 to help deal with protests.“The Saudis look at Bahrain like the US Puerto Rico,” Teitelbaum noted, saying that Bahrain’s annexation by the Saudis could be fathomed in the future if a security crisis developed.“The Saudis feel threatened by Iran and the local Shi’ites are feeling the brunt of that,” he said, noting that the country’s execution of Shi’ite cleric Nimr al-Nimr in January “is a signal to Iran.”As long as the Saudis feel threatened internally and externally, continued Teitelbaum, “Shi’ites continue to pay the price of being the ultimate other.”Aymenn Jawad al-Tamimi, a fellow at the Middle East Forum who closely follows Islamist opposition groups in Syria and Iraq, told The Jerusalem Post that the project of Islamic State building a state structure is a failure, which could lead to members going back to al-Qaida.Tamimi showed a document of an Islamic State dissenter who argued that the group should not publicize pledges of allegiance from far flung “provinces” in places like Yemen or Saudi Arabia because of the difficult local circumstances that impede its growth.“The problem is projecting the credibility of developing governance,” which doesn’t exist in Yemen and Saudi Arabia.Guido Steinberg, from the German Institute for International and Security Affairs, said that al-Qaida may be having recruiting difficulties as more than 80 percent of foreigners join Islamic State. For the youth, “al-Qaida is a spent force,” he argued.