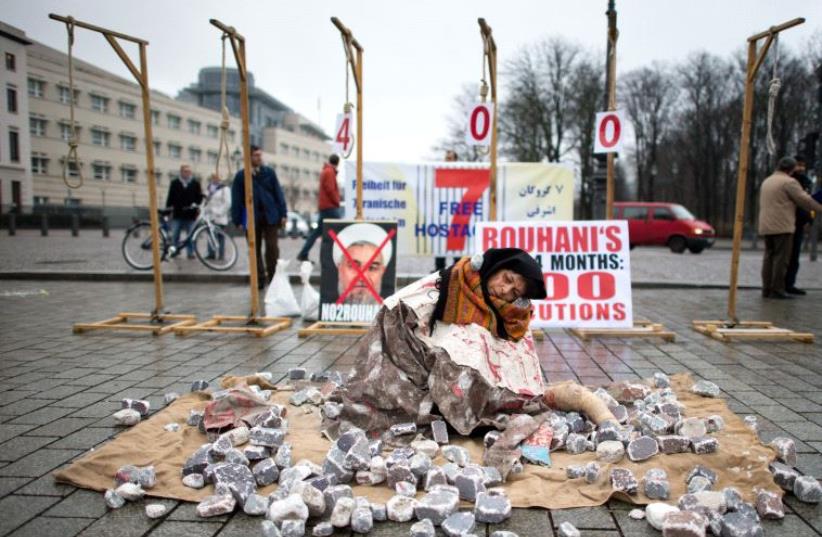 Exiled Iranians protest against executions and stonings in Iran during a demonstration on December 10, 2013 in Berlin
(photo credit: (ERIC BRIDIERS/US MISSION GENEVA))
Advertisement
The Islamic Republic of Iran arrested more than 30 men suspected of being homosexuals at a private party last week in the Esfahan province, the prominent Canadian NGO Iranian Railroad for Queer Refugees reported on Thursday.“IRQR received several reports in the last few days and we were able to confirm that police attacked guests and physically beat them. Police detained the men, ages 16 to 30, at the Basij [Revolutionary Guard Militia] Station and then transferred them to Esfahan’s Dastgerd Prison. A few people managed to escape and we received reports that there were several heterosexual individuals among those arrested,” the human rights NGO wrote on its website Thursday.Authorities raided the party in the Bahadoran district of central Iran and fired their guns while seizing the men.IRQR added, “After a few days, all the families were informed by Basij that their sons were arrested for sodomy. A special prosecutor has been assigned to their cases and they were charged with sodomy, drinking alcohol and using psychedelic drugs. It was reported that prisoners will be sent to Esfahan’s Medical Jurisprudence Department for anal examination in order to provide evidence of homosexual acts to the court.”The Basij is a paramilitary force used to repress dissidents. It played a key role in dismantling the Green movement protests in 2009 against a reportedly fraudulent presidential election. Iran’s Islamic law system prescribes the death penalty for gays. Capital punishment is the penalty dictated in the Hadiths, the religious writings in Islam second only to the Koran, which only mandates punishment for homosexuals but does not specify in what the manner. Human rights activist and gay German Green Party MP Volker Beck told The Jerusalem Post on Thursday that, not only does the Iranian regime advocate annihilation of Israel, “but also its persecution and policy of annihilation  against homosexuals makes the Iranian regime an enemy of human rights. Such a country cannot be a partner of our community of values.”The IRQR wrote, “This unfortunate event has created chaos among the LGBT community in Esfahan since prisoners were forced to write down full names of all their LGBT friends and acquaintances. IRQR is deeply concerned about this situation since Iran has a well-documented history of persecuting homosexuals.”Stefan Schaden, an LGBT rights activist and spokesman for the European “Stop The Bomb campaign,” wrote in an email to the Post, “It is outrageous that the European Union is cozying up to the Iranian regime for trade and ignores the deadly homophobia, the overall disastrous human rights situation, the latest execution and arrest waves and the regime’s promotion of antisemitism and support for terrorism. Iran’s Islamist regime with [Hassan] Rouhani as President is anything but ‘moderate.”’Schaden said, “While the Islamic State throws gays from rooftops, the Islamic Republic hangs them. Iran’s regime forces homosexuals to flee the country and the EU turns a blind eye. The EU is, however, required in their dealings with third countries to comply with binding guidelines laid down in the Union’s ‘LGBTI [lesbian, gay, bisexual, transgender and/or intersex] Toolkit’ to combat state violence against LGBTI persons. The EU must clearly step up its efforts in this regard and consider more human rights sanctions against the Iranian regime.“US Secretary of State Rex Tillerson slammed the Iranian regime on Wednesday for its human rights violations. The country’s clerical rulers executed a gay adolescent in July 2016. Iran’s UN diplomatic missions in New York and Geneva did not immediately respond to Post press queries.