Egyptian official accused the delegation of German archaeologists that has been working on the site's reconstruction of engraving the Stars of David into the Shrine's stone. 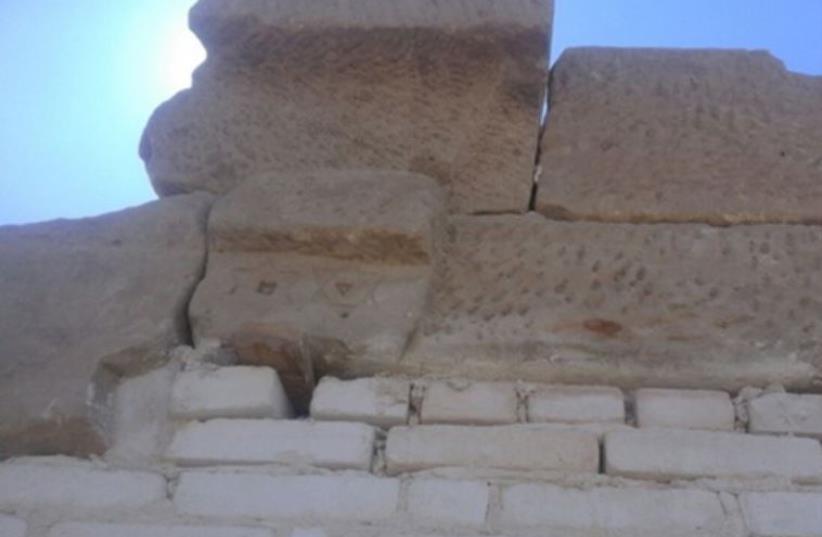 The Sign of David engraving found in the Aswan shrine
(photo credit: ARAB MEDIA)
Advertisement
Egypt has recently been witnessing a great commotion following the archeological discovery of two Star of David engravings in an ancient Temple in the southern city of Aswan.The Roman Temple, which dates back to the 3rd century B.C, is located in the Elephantine Island in Aswan.Dr. Mahmoud Afifi, the head of the Egyptian Antiquities branch in the Antiquities Ministry, said that he noticed a stone with two Star of David engravings in the Roman temple. Afifi accused the delegation of German archaeologists that has been working on the site's reconstruction of engraving the Stars of David into the Shrine's stone. Afifi ordered the archaeologists to immediately remove the stone with the Star of David's engraving from the temple, threatening to take all legal measures against them if they would ever repeat such a move.An Egyptian news site, Suezbalady, went even further, claiming that the two Star of David engravings that were found were drawn by a Jewish member of the German delegation, who wanted to vandalize Egyptian culture and provoke Egyptians.The newly-appointed Egyptian Antiquities Minister, Khaled Anani, released a press statement Saturday following his visit to the Aswan shrine.Anani stated that he had instructed the joint Egyptian-German group to submit him a scientific report about the two engravings found on one of the temple's walls. "The report will include a picture of the stone under discussion from the time it was discovered, to explore its archaeological repercussions without the two Star of David engravings, "Anani said."We will be aided by an expert of Islamic antiquities to understand whether the Sign of David was common in that early period", Anani announced.